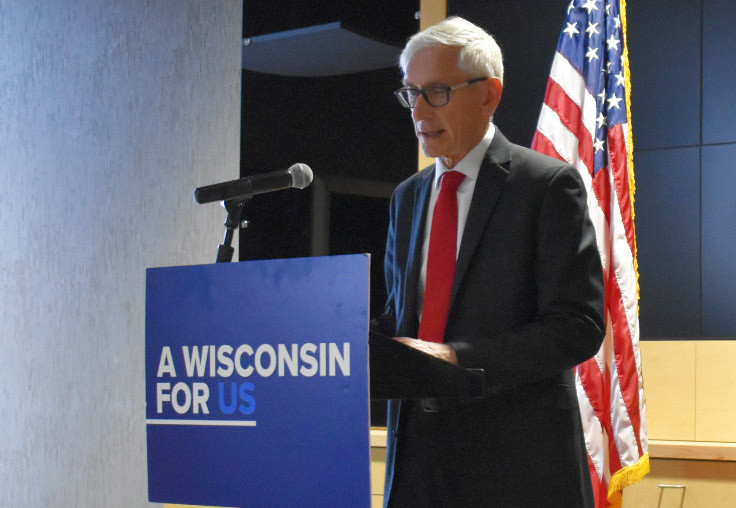 Gov. Tony Evers spoke at a press conference Wednesday Jan. 9, 2020, in Wausau about his legislative priorities for 2020, which he framed as "homework" for legislators. Rob Mentzer/WPR

At a press conference in Wausau Thursday, the governor, a former teacher, laid out some of his legislative priorities for 2020. They're things he says have bipartisan support. Evers called on legislators to remain in session long enough this year to pass bills he identified as having been introduced in one or both houses of the Legislature.

On the list of priorities released by the governor’s office are capping copay amounts for insulin; closing the state’s "dark store" loophole; improving water quality; and addressing homelessness. He pointed to a bipartisan bill on homelessness and the results of the Speaker's Task Force on Water Quality, which on Wednesday unveiled its proposals.

The proposals amount to a $10 million effort to reduce nitrates and boost well testing and pollution remediation efforts. Evers said he believes the legislation that comes out of the task force will be a good start.

"I have lots of young grandchildren," Evers said. "Having them consume water that is either PFA-contaminated or lead-contaminated, that would scare the living hell out of me, frankly."

Some of those issues, including farm supports and boosts to mental health services, were also addressed in the 2019-20 state budget. But Evers said new bills could further improve people's lives.

The "dark store" loophole allows big-box retailers to pay lower tax rates by assessing their property taxes at the rate of vacant stores. The Wisconsin League of Municipalities, Wisconsin Counties Association and Wisconsin Towns Association have called for ending the practice, which they say shifts property tax burdens onto homeowners and small businesses. Bipartisan legislation to end the loophole has failed to pass in previous legislative sessions.

Evers noted that he had met with Republican legislative leaders, Senate Majority Leader Scott Fitzgerald and Assembly Speaker Robin Vos, to discuss these priorities. On Wednesday, Fitzgerald, who is running for Congress, called Evers' message to legislators "ridiculous."

"I thought I had a good meeting with the governor last week where we discussed priorities. But giving a coequal branch of government 'homework' in a condescending letter won't help him grow support for an agenda with Senate Republicans," Fitzgerald said on Twitter.

Sen. Jon Erpenbach, D-West Point, appeared with Evers at the press conference, which was followed later in the day by another appearance in Eau Claire. He said that although power in the Capitol is divided between the Democratic governor and the Republican-controlled Legislature, on multiple issues public opinion shows a lot of agreement in the state.

Evers also said at the Wausau press conference that he would not sign a bill that would make English Wisconsin's official language. The bill, which originally circulated in 2007, has been taken up by a group of Republican lawmakers in the Senate. Evers said that bill "will not pass my desk. I'm not sure it will pass."

"Clearly we are a diverse state and we speak many languages," Evers said. "To me a bill like that is a solution seeking a problem. I don’t know what problem it solves other than to offend some people."