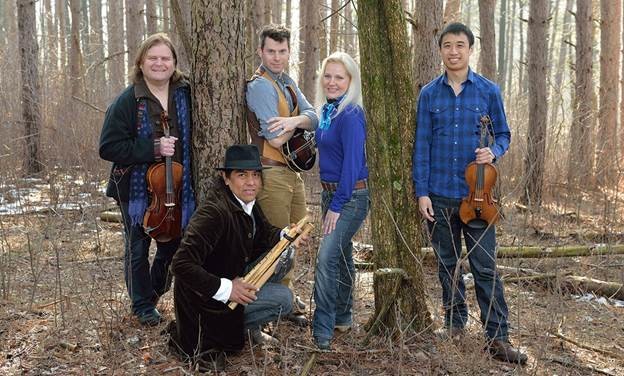 Robert Mirabal is a Native American flute player and maker with roots in Taos Pueblo, New Mexico. The three-time Grammy Award-winning musician’s flutes have been on display at the Smithsonian Institution’s Museum of the American Indian. He has twice been named the Native American Music Awards’ Artist of the Year, as well as Songwriter of the Year three times.

Eclectic string quartet ETHEL was established in New York City in 1998. The group performs original music as well as works by notable contemporary composers, often with amplification and improvisation. They won a Grammy in 2009 with jazz legend Kurt Elling.

Robert Mirabal and ETHEL form a unique collaboration for their work “The River.” The album was recorded in Taos Pueblo, New Mexico, with each musician contributing original poetic or musical components. This masterpiece puts a contemporary spin on Native American themes, and finds inspiration in the concept of water as the embodiment of spirit, and “the river” as the great connector of all people.

This concert is presented by the Wisconsin Union Theater’s Performing Arts. This program was supported in part by a grant from the Wisconsin Arts Board with funds from the State of Wisconsin and the National Endowment for the Arts. Sponsors include the American Indian Studies program and the Nelson Institute. Media sponsor is WORT, 89.9 FM.