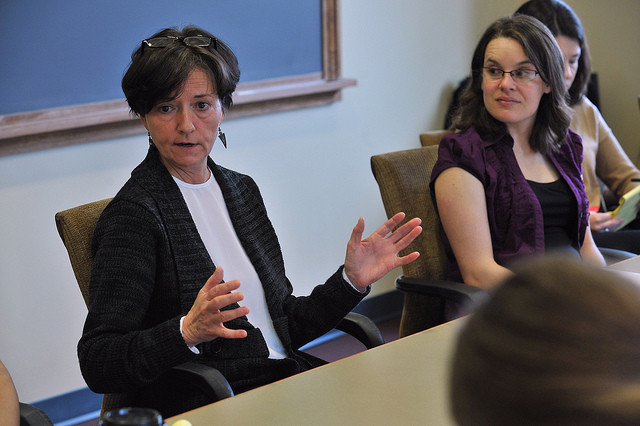 Gogebic Taconite Cited EPA Interference In Alaskan Mine As Cause For Departure
By Danielle Kaeding
Share:

The president of mining company Gogebic Taconite recently pointed to U.S. Environmental Protection Agency intervention in an Alaskan mine as one reason for stepping back from plans for an iron mine in northern Wisconsin. However, the agency says it has no plans to take similar action against GTAC.

Instead, the EPA is working with tribal, state and federal agencies to catalog environmental data that would guide decisions on projects around Lake Superior.

GTAC President Bill Williams had said the company didn’t want to spend millions preparing to construct a mine that the EPA may hold up or prevent altogether.

"Look at the Pebble mine up in Alaska … the company had not even submitted a mine plan and the EPA jumped on it," he said.

Williams said The Cline Group, GTAC’s parent company, would like to speak with the EPA about their plans.

"Actually coming in and talking with us being at the meetings — starting from square one, bringing their objections and concerns out front before a decision is made," said Williams.

But EPA Regional Administrator Susan Hedman said the only decision the agency has made is not to take action regarding GTAC’s plans to mine. The site of the proposed Pebble Mine, which the EPA ordered suspended due to environmental concerns. NPCA (CC-BY-ND) Many environmentalists protested the proposed iron ore mine in northern Wisconsin up until Gogebic Taconite walked back its plans earlier this year. OLB (CC-BY-NC).

Six northern Wisconsin tribes wrote a letter to the EPA last year asking the agency to use its veto authority under the Clean Water Act to halt mining activity.

"That’s something that EPA has rarely ever done in its entire history," said Hedman. "It’s a process that takes a great deal of time to evaluate whether or not we take it. In December, I notified the tribes that I would not be taking action.”

Instead, Hedman said the agency is focusing efforts to make environmental data that’s already available in the Lake Superior basin more accessible to the public and to policymakers.

"We're putting together this collaborative. The first step is to catalog all of the data that federal, state and local agencies have gathered. The second step is to bring in the academic community so we can add all of their data to the catalog," she said.

University and college researchers will present their findings from studies around the lake this week at an EPA meeting in Houghton, Michigan.

Rebecca Graser is the regulatory program manager for Wisconsin with the U.S. Army Corps of Engineers. Graser said more information is a good thing and could be useful in the agency’s permitting process for large projects.

"For example, a lot of the monitoring requires several years of data. That’s certainly one of the major hurdles to completing a review in a more rapid fashion," said Graser.

The Wisconsin DNR’s Northern Water Leader Nancy Larson believes the collaborative would bolster ongoing environmental monitoring around the lake. However, she said it’s too early to say how it may impact permitting projects.

"The more information we can have about the processes in the lake and the watershed, the better off we are when we have to make decisions about any kind of management activitiy," said Larson.

Those decisions can't be made in a vacuum, according to Jim Zorn, the executive administrator of the Great Lakes Indian Fish and Wildlife Commission. The commission represents 11 tribes in Wisconsin, Minnesota and Michigan. Zorn said the collaborative is an opportunity to identify gaps in information.

"If you just look at discrete little parts of the lake or discrete little projects, you tend to get very microcosmic, which you need to do in that particular site-specific place. But you can also face the death by a thousand cuts," said Zorn.

Hedman said this kind of information-sharing will help guide decisions on projects that may affect the lake.

"We’re going to continue to build the science so when a mining company comes back, they’re going to deal with facts and science," said Wiggins.

Wiggins said mining will continue to be a focus of the tribe’s meetings with the EPA.