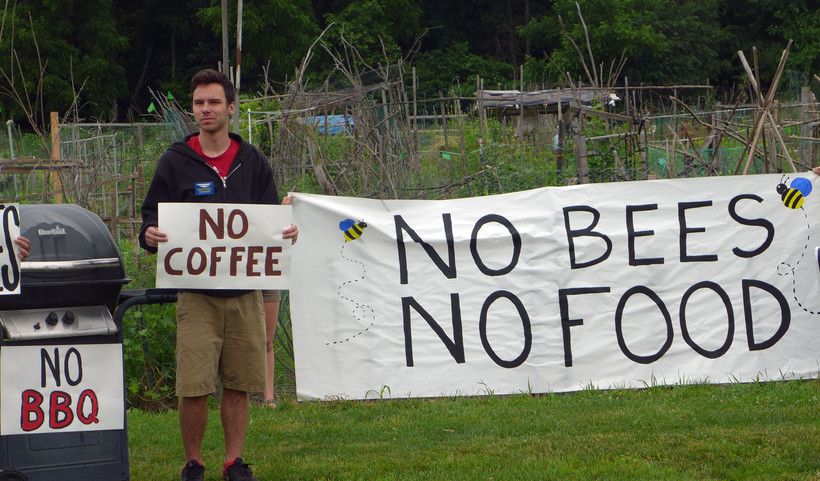 Members of the group Wisconsin Environment held an event last week in Madison.

A state environmental advocacy group says the loss of pollinators like honeybees is a major food security issue and they're urging the federal government to ban pesticides that can harm bees.

Wisconsin Environment is part of a national campaign called No Bees, No Food, which is calling on the Environmental Protection Agency to stop the use of a class of pesticides called neonicotinoids, according to the group’s Robert Abrahamian.

"The science is clear and the time for action is now," he said.

The state doesn't currently have any rules on the books against neonicotinoid use and the Wisconsin Farm Bureau doesn’t support any ban.

"I think that’s premature and I think that there are multiple factors that are contributing to colony collapse," said the group’s Karen Gefvert.

But Gefvert acknowledged that bees are important to several crops grown in Wisconsin, including apples, cranberries and cucumbers.

"To say that if we didn’t have bees we wouldn’t have food is an extreme statement but we need to have pollinators in general," she said.

Gefvert helped draw up the state’s pollinator protection plan, which includes steps like increasing areas where pollinators can forage like roadside plantings and home gardens.

Madison plans to reduce mowing in parks and other areas by up to 1,500 acres, according to the city's food policy director, Mark Woulf.

Still, the actions called for under the plan remain voluntary.

An EPA study released earlier this year found the harm of pesticides varied depending on the crop, from nonexistent to significant.