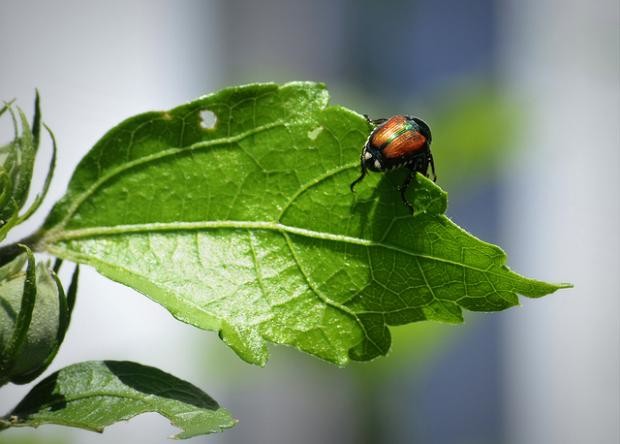 The number of Japanese beetles in Wisconsin was down in 2014. Photo: Gwendolyn Swansbury (CC-BY-NC-ND).

Entomologist: 2014 Was A Quiet Year For State’s Agricultural, Garden Pests

“This was as quiet a year for agricultural pests as I’ve ever seen in my career,” said entomologist Phil Pellitteri. Not only that, he added that it was a low activity year across the board, regardless of the crop.

Pellitteri, who headed the University of Wisconsin-Madison Insect Diagnostic Lab until his retirement earlier this year, said that there is no single weather event, like a drought or extreme precipitation, that would explain 2014’s low insect levels. He said that since many of the agricultural pests migrate here from other parts of the country or are here at different times of the year, it's very unlikely to see a single factor affect all of them all season long.

One example is the potato leaf hopper (PDF download), which migrates from the southern U.S. north to Wisconsin in the spring. Pellitteri said that while they arrived as expected in early May, “they really just never took off.”

One pest for which there may be some explanation is the European corn borer (PDF download). Pellitteri said that the impact of genetically modified (GMO) corn on that species is becoming more prominent. For that insect, it’s the lowest population we’ve seen in 73 years, he said, “and this has been a ten-year trend for that non-native species’ being dramatically dropped down.”

Similarly, Pellitteri said that the number of corn rootworms (PDF download) has decreased as well, likely also because of the GMO crops. That is important, he said, because that species is the biggest pest for famers planting corn in the same location year after year.

For the home gardener, Japanese beetles (PDF download) are a common nuisance. But like the more serious agricultural pests, their numbers were also low according to Pellitteri. He said that this could be a lingering effect of Wisconsin’s drought conditions in 2012 and 2013. But he said that even in micro-environments with no drought issues, the beetles didn’t thrive this year.

More likely, Pellitteri said, is that Wisconsin is on the downswing of a multi-year cycle for that insect.

“On the west side of Madison, where I live, 10 years ago it was kind of a science fiction experience to deal with those insects,” Pellitteri said.

But last year, he said, he saw about 5 percent of what he saw at the peak of the cycle.

“That’s kind of the general trend,” Pellitteri said. “In communities where it’s relatively new, the numbers will go up for a while, but after five or six years of really bad problems, it seems to start to level off.”

That’s good news as new invasive species appear. According to Pellitteri, when they arrive, the pattern is that they are the “biggest nightmare early in their invasion,” and then a balance is usually found.

Then, Pellitteri said, “the question is whether that balance will be acceptable to us, or will it be problematic.”