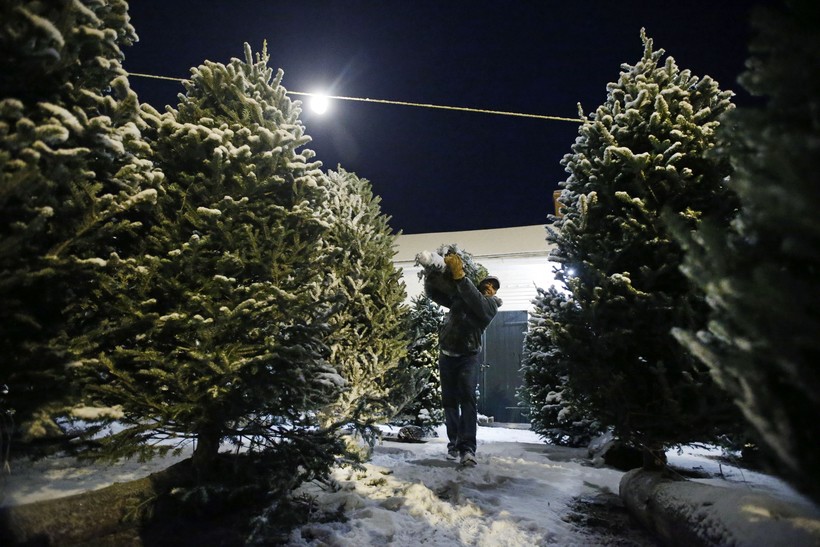 Enough Evergreens To Go Around?

Parts Of US Face Christmas Tree Shortage, But Not Wisconsin
By Danielle Kaeding
Share:

Some areas of the country are seeing a shortage of Christmas trees this year. However, Wisconsin tree farmers say there are enough evergreens to go around this holiday season.

Christmas trees take around eight to 12 years to grow, said Doug Hundley, spokesman for the National Christmas Tree Association. Hundley said many of the 45,000 small tree farmers across the United States didn’t sell or harvest trees when the Great Recession hit in 2007. With fewer trees planted then, there’s a tighter market now, especially for states that supply the rest.

"That’s Oregon, North Carolina, Michigan, Wisconsin, Pennsylvania," said Hundley. "These states grow millions of trees and export them across the country. This impact from this recession affected those guys in a big way."

But, Linda Flatt with Santa’s Evergreens in Hudson said they plant up to 700 trees each year.

"We don’t have any shortage of trees," she said. "We have no problem here."

The six-acre tree farm has been in business for 15 years, and Flatt said it’s already been a "boomerang" season. Over the Thanksgiving weekend, she said they received 96 phone calls from people looking for Christmas trees.

"We started selling the weekend before Thanksgiving this year, and we sell 'til our supply has really dwindled, and the sales and our fresh cuts are sold," she said. "That just depends on the number of people that we have."

"We kind of gauge about how many trees we’re going to need for a season, so 12 years previous to that we try to put that many trees in the ground," she said.

Hundley said Wisconsin should be in good shape, but Oregon, North Carolina and Michigan may not have as many trees to go around.

Central Wisconsin Evergreens in Merrill supplies Christmas trees to the U.S. and Canada. Owner Kurt Helmstadter said he has received calls from buyers in New Mexico and Alabama this year. He said both usually ordered trees from the Northwest.

"Any one that wants a Christmas tree will get one," Helmstadter said. "It may not be what they want."

Helmstadter said they sell more than 30,000 Christmas trees each year, around 75 percent of which are Fraser and Balsam firs. He expects to have fewer trees next year due to less planting.

While the market is tight, Hundley said he only expects Christmas tree prices to run about 5 to 10 percent more on average nationwide from last year.

"What they’ll want to do is go shop a little earlier. I would prefer to go in the next week or so instead of waiting until the middle of December, if I was a buyer, just so you can be sure the selection will still be there," he said. "It just depends on where you live and where you normally shop."

Even so, Hundley said he’s confident there are enough trees for those seeking them out this holiday season.

According to the Wisconsin Christmas Tree Producers Association, the state has more than 365 licensed Christmas tree farms.

Wisconsin ranks fifth in the nation for the number of trees harvested each year, according to the most recent national agriculture statistics. However, the number of Christmas trees cut annually in Wisconsin has declined almost 40 percent from roughly 1.6 million in 2002 to a little more than 600,000 evergreens in 2012.