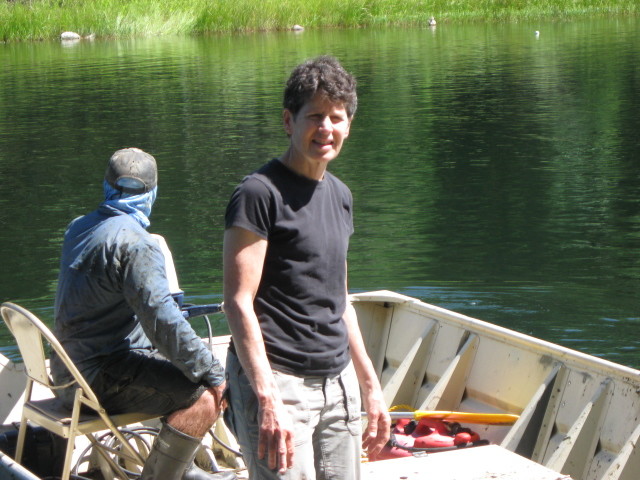 Researchers this week concluded a 30-year experiment on the effects of acid rain and mercury on a pristine northern Wisconsin lake. Despite their success, the scientists say it was a bittersweet experience.

On a beautiful, clear morning in the Northern Highland American Legion forest, the sun dances on the surface of Little Rock Lake. For Department of Natural Resources research scientist Carl Watras, it's a good day to wrap up three decades of his life's work: "Today we're removing a barrier that's been in place for about thirty years, to separate this lake into two basins."

One half of the lake was kept unchanged. The other half was infused gradually with acid to simulate the effects of sulfur dioxide and mercury produced by coal-fired power plants in Ohio. The acid rain was killing lakes along the eastern seaboard and even across the Atlantic. Watras wanted to prove that it could also happen here. "If acid deposition in Wisconsin reached the intensity in New York, in the Adirondacks, in Sweden, or eastern Canada," he said, "We would see a lot of fishless lakes in northern Wisconsin."

After a few short years, that's what happened at Little Rock Lake. "The fishery basically collapsed," said Watras. "The bass stopped reproducing. The eggs just deteriorated on the nest."

In the narrow neck of this hourglass shaped lake, divers are on the bottom, cutting the heavy, black curtain loose from waterlogged sandbags. Scuba diver and research scientist Greg Sass slashes with a small blade in muddy water, which takes some caution, he says. "Working in darkness and making sure you're not cutting your hand with the utility knife as you're cutting away sections."

Sass has mixed feelings as he brings this 30-year experiment to an end. "It's important, yet it's kind of bittersweet. We don't have very many opportunities - if any - left right now, where we can actually split a lake in two and do those sorts of manipulations."

UW Madison researcher Susan Knight is on top in one of the rowboats. "My role today and back in '84 was muscle: helping put the curtain in back then, and pulling the curtain out today."

Knight is a botanist; she and Carl Watras both witnessed what the acid did to the plant life of Little Rock Lake. "A dense mat of filamentous algae developed," said Watras. "It was like very, very fine angel hair spaghetti. But green."

Knight continued: "It looks like a big, green cloud, just kind of sitting in the bottom, kind of drifting around. I imagine that the fish probably didn't like to swim through it."

The nasty effects of this experiment led to new state and federal environmental laws, including amendments to the Clean Air Act. Carl Watras, Susan Knight and Greg Sass say their work here helped bring back lakes in New York, Canada, and Sweden, and may have saved the lakes of northern Wisconsin.

"The results led to some changes in sulfur emissions," said Knight. "These kinds of lakes that are typical up in northern Wisconsin are especially vulnerable to acidification, and they're very special, and we just don't have that many in the world."

But Watras says there is one more question that needs to be addressed about coal-fired power plants. Along with sulfur dioxide and mercury, there's still carbon dioxide, which has been linked to climate change.

"The initial work here played into Wisconsin's acid rain bill in 1986," said Watras. "It played into the Clean Air Act amendments, and maybe it will eventually play into CO2 or global warming."

As the divers pulled the heavy black curtain out of Little Rock Lake, and the curtain fell on 30 years of research, the scientists here say there is still work to be done.