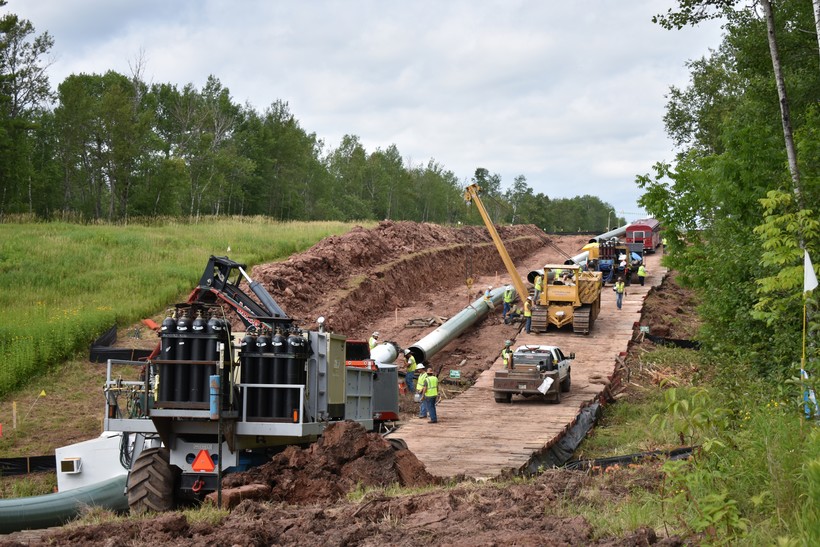 Contractors work on the Line 3 replacement project outside of Oliver near Superior.

Contractors work on the Line 3 replacement project outside of Oliver near Superior in 2017. Elizabeth McMahon/WPR

Construction of a 12-mile segment of Enbridge Energy's aging Line 3 pipeline is already underway in Wisconsin. The project is expected to cost more than $100 million for the Wisconsin portion of the pipeline.

Enbridge’s Line 3 was originally installed in 1967 and runs 1,097 miles from Edmonton, Alberta to Enbridge’s Superior Terminal. The entire replacement project on the United States side is expected to cost around $2.6 billion.

Corrosion on the outside of the pipeline due to a coating used at the time of installation has led to the replacement of the Canadian firm's pipeline, said Enbridge spokeswoman Jennifer Smith.

"The original Line 3, which is a 34-inch (wide) pipe, was built to carry upwards of 800,000 barrels. Due to the integrity issues in our maintenance program, we’ve been voluntarily restricting that volume to around 390,000 barrels per day. These are barrels of oil that we’re all using every day in one form or another," Smith said.

Without replacement, the pipeline is projected to need thousands of integrity digs to maintain Line 3 over the next decade. Becky Haase, senior community engagement advisor for Enbridge in Superior, said inspections have discovered anomalies within the pipeline.

Enbridge is constructing a 36-inch-wide pipeline to replace Line 3 that will carry up to 760,000 barrels of oil per day once construction is complete.

Barry Simonson, project director for Enbridge, said construction of the line in Wisconsin should be complete by early winter. However, Simonson said the company still needs to obtain permits to move forward with the replacement project in Minnesota. The state began holding a series of public meetings on the project there this summer.

"We would expect to start construction late summer, early fall in 2018," Simonson said. "So, in the back end, we are looking on being able to have Line 3 in service sometime in 2019 —all depending upon when our permits between the state of Minnesota, as well as environmental and other local jurisdictional permits come in."

Elizabeth Ward with the John Muir Chapter of the Sierra Club in Wisconsin said she’s surprised construction is already underway in Wisconsin "given that the Minnesota process is still underway and they’re not even really close to getting their permits on the Minnesota side."

Enbridge's Smith contends the Wisconsin project is a key part of the company's "safety driven maintenance program" and not dependent on regulatory approvals in Minnesota. Still, Ward argued Enbridge could face a bottleneck in its system with the project.

"The Line 3 replacement project is expected to bring double the amount of oil that Line 3 currently carries into Superior, so it’s a lot more oil," she said. "They’re going to need a lot more capacity then south of Superior."

Yet, Smith said the project merely returns Line 3 to its existing capacity prior to the discovery of anomalies in the original pipeline. Tribal and environmental groups in Minnesota have opposed Enbridge's plans to replace Line 3. They would like to see the pipeline removed from service or see the existing line removed from the ground. Enbridge is planning to abandon the original line and leave it in place, Smith said.

"It will be completely cleaned of any oil, any product," she said. "It will be capped off in segments, and that pipeline will remain within our corridor and will be continued to be monitored going into the future."

Smith said leaving the original line in the ground also avoids the risk of disturbing five other pipelines in the same corridor. Andy Pearson, Midwest tar sands coordinator with anti-tar sands group MN350, said more efforts should be made to transition away from fossil fuels.

"What we don’t want is a doubling of the capacity that lasts at least another 30 years and probably double that," Pearson said. "We don’t think that’s consistent with what we know we need to do in terms of transitioning to a cleaner energy future."

The Line 3 replacement project is employing more than 500 workers from the Twin Ports area and beyond.

Editor's Note: A previous version of this story reported  there were thousands of anomalies discovered in Line 3 and incorrectly attributed that information to Becky Haase with Enbridge. The story has been updated to reflect the reason behind replacing Line 3 and that thousands of integrity digs have been conducted to inspect anomalies within the pipeline.