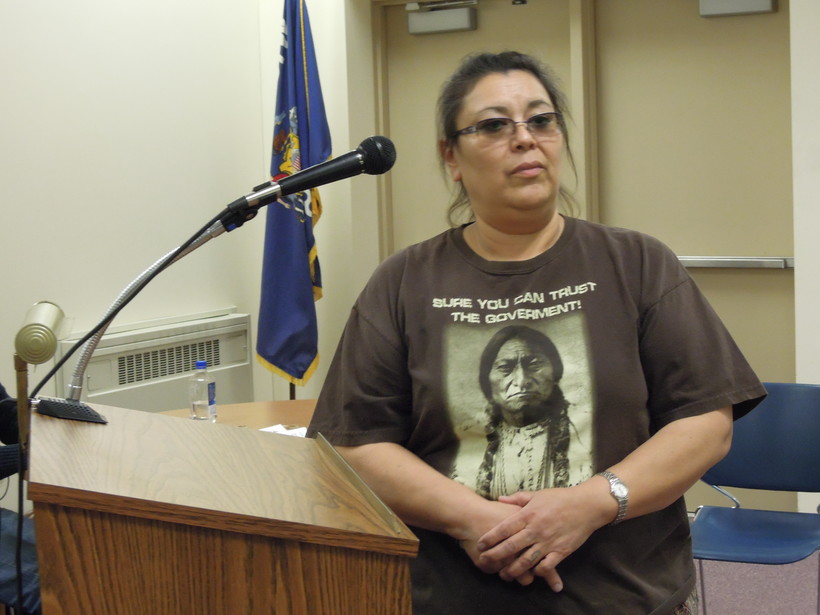 Residents Weighed In At DNR Meetings In Superior
By Danielle Kaeding
Share:

Canadian firm Enbridge Energy is proposing to send up to 225,000 barrels per day from the Bakken oil fields to Clearbrook, Minn., and 375,000 barrels of oil per day from Clearbrook to Superior through its Sandpiper pipeline. The company also wants to replace segments of its aging Line 3. Construction of each project on the U.S. side would cost just under $3 billion. The pipelines would run along Enbridge’s existing right-of-way in a 14-mile stretch through Douglas County.

Residents had a chance to weigh in on a DNR draft environmental study of the project at the hearing. Around 20 people, some of whom had come from as far away as Madison, spoke on everything from economic gain to potential risks to property rights and the environment.

Elizabeth Ward, conservation program director with the John Muir Chapter of the Sierra Club, said the state should take a step back on permitting and study the impacts of all Enbridge pipelines in Wisconsin.

"There’s nothing in the statutes that says they can’t look at the cumulative impacts," said Ward.

But Enbridge spokeswoman Shannon Gustafson said the company can’t afford further delays when it comes to replacing Line 3, which was built in 1967. She said the company had detected corrosion issues with the that line.

Gustafson said Enbridge could do up to 4,000 digs in the next 15 years to conduct maintenance and repairs on the line if it’s not replaced. "That’s a lot of disruption to landowners, to communities, to the environment that we would really like to avoid," she said.

Douglas County officials and business leaders voiced their support for the projects, including Jim Caesar with the Superior-Douglas County Development Association.

"We value the over 800 jobs that they provide and the hundreds of related construction jobs," he said. "We value their more than $20 million tax revenue investment."

Around 400 to 500 construction jobs would be created in Wisconsin, according to the DNR’s draft environmental study.

Douglas County Administrator Andy Lisak said the projects would benefit the regional economy and provide a positive impact on the environment, "once a more efficient and environmentally friendly pipeline transportation alternative is provided for … crude oil that is currently transported to Superior and other destinations by truck and rail car."

However, environmental advocates and tribal members argued the oil industry is on its last leg.

"You … start with the assumption that things are going swimmingly in the Bakken, and they are not. They are busting in the Bakken," said Thane Maxwell with the tribal organization Honor the Earth. "There is no future in the tar sands, and our political leaders are rapidly seeing that."

U.S. Secretary of State John Kerry told the CBC this week that there was no need for new pipelines across the U.S.-Canadian border. Also this week, Canadian Prime Minister Justin Trudeau and President Barack Obama announced a pledge to further reduce the nations’ carbon footprint.

The announcement comes as companies like Whiting Petroleum have suspended plans for more drilling wells and cut capital spending in the Bakken with oil prices trading for less than $40 per barrel.

However, the International Energy Agency has said oil prices may have bottomed out.

Enbridge’s Gustafson said their customers remain committed to the pipeline projects, noting that the Bakken is still producing more than 1 million barrels of oil per day. Even so, one landowner denounced the company’s plans, saying that Enbridge has trespassed on private property to build their pipelines.

"I would like the state of Wisconsin to specifically state in these papers … that Enbridge has already obtained written permission from the landowner to use the routes you are approving and they have to give that information to the state," said Superior’s Jerry Engelking.

Enbridge has said in the past that Engelking violated the terms of an easement agreement with the company. But the landowner has denied accepting payments in exchange for Enbridge to build on his property.

"I would hate to see that go away because of the pipeline and dirty fossil fuels and climate change and all those things," said Northrup.

Others questioned the thoroughness of the DNR’s draft study on the pipeline projects, calling for further investigation of Enbridge’s system and routes.

Ben Callan, water management specialist with the agency, said the DNR has compiled information about the company’s history and network in Wisconsin.

"I think that information is touched upon if not addressed in the draft EIS and those are the comments that allow us the opportunity to further vet those out," said Callan. "If there’s a concern that the department hasn’t appropriately addressed that in the draft, then we would need to modify that draft before it becomes finalized."

The Wisconsin DNR will accept public comments on its draft study through March 25. After that, Callan said it may take several weeks or more to review public input and no permitting decisions would be made until the environmental impact statement has been finalized.

Editor's note: A previous version of this story reported that Sandpiper would carry 600,000 barrels of oil per day from the Bakken oil fields to Superior. The story has been edited to reflect the correct amount of oil flowing through each segment of the Sandpiper line.