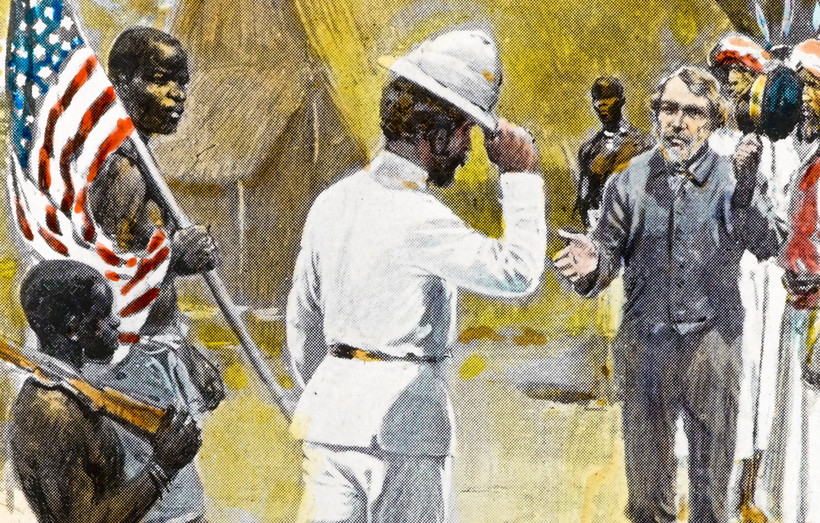 Drawing portraying the meeting of David Livingstone, right, and the journalist Henry Morton Stanley, center, in 1871. Stanley was sent to find the Scottish missionary and explorer by the New York Herald Newspaper. It was this meeting that gave rise to the famous phase "Dr. Livingstone, I presume?". CC0

David Livingstone was one of the most famous 19th century pre-colonial European explorers of Africa — a Christian missionary obsessed with trying to find the source of the Nile River. After he vanished in the heart of Africa for several years, he was found by another explorer, Henry Morton Stanley, who greeted him with the famous words, "Dr. Livingstone, I presume?"

Livingstone died of malaria nearly 150 years ago, but Africans are still debating his legacy today as they assess the impact of European colonialism.

Petina Gappah, a writer from Zimbabwe, has been obsessed with the story of Livingstone since she was 10 years old. She spent years researching his history, and in her novel "Out of Darkness, Shining Light," she tells the story of what happened to Livingstone's body after he died. In her novel, the story is told from the perspective of the Africans who carried his body across the continent.

In 1873, 69 Africans carried his body for nine months in the African heat to bring his body back to England to be buried. Those transporting his body knew a dead white man would spook the locals so the group devised a rather gruesome plan so that the grieving caravan would appear as any regular trading party.

"Remember, this was in pre-Christian pre-colonial Africa. There would have been a lot of superstition and general unpleasantness when they tried to carry this dead body through these different villages and towns," Gappah told Steve Paulson for "To the Best of Our Knowledge." "It really was quite an extraordinary thing to do."

The group took out Livingstone's organs, burying his heart where he died, in accordance with Victorian superstition. Next, they laid out his body to dry for 10 days. Then, they folded him in half at the waist, wrapped him in paper, and disguised the body as a package for trade, Gappah said.

Gappah imagines the Africans mourning Livingstone had quite an act to put on in their travels, pretending their funeral caravan was simply transporting packaged goods.

"It was a really bizarre theater," Gappah said.

Part of the reason this extraordinary effort was taken was because of how beloved Livingstone was back home in England. But for Africans, the legacy of the explorer is complicated, one both of reverence and imperialism.

Gappah spoke to Paulson about the complicated legacy Livingstone leaves behind with Africans today.

Steve Paulson: I would assume there's a very different history told by Europeans who celebrate Livingstone. Is he considered an example of European imperialism?

In a sense, Livingstone was not himself an imperialist, but he was certainly, in his death, an agent of imperialism. At the same time is then complicated by his role in the slave trade, by ending the slave trade, and also by bringing Christianity or trying to bring Christianity to Africa. You find that in many African countries, all the monuments that carry his name are still there.

SP: So there are a lot of monuments around?

PG: The capital city of Malawi is Blantyre, named after the city where Livingstone was born (in Scotland). Zambia has a city called Livingstone, which is right at the Victoria Falls, which he claims to have discovered. But of course, you can't really discover a place where people are living. And even Victoria Falls, you know, the falls themselves as well as the city in Zimbabwe. We still have those names that David Livingstone gave them. I went to (the University of) Cambridge on a Livingstone scholarship.

SP: So I have to ask, what's your take on Dr. Livingstone? Is he someone you admire?

He was not an evil man. I'm very uncomfortable dealing with evil, but I can deal very well with flaws. He was a deeply, deeply conflicted and tortured man. He had a wellspring of kindness in him, but also an incredible arrogance.

SP: So this novel strikes me as a part of a kind of a larger project that so many African writers and intellectuals are part of. How do you retell this old story? 19th century history. How do you tell that from an African perspective? Do you consider yourself to be part of this larger project?

PG: I absolutely do. And I'm so glad that you recognize it because I think it's part of a decolonization project. I would love to see more Livingstone novels and, you know, more novels about this particular era. Because I think the more we have of this, the better it is.

It's like Americans with the Civil War. I mean, how many Civil War novels have there been? I mean, Margaret Mitchell is just one, but there are also novels by black authors and by women authors. You know, I recently saw "The Beguiled," the Sofia Coppola film, which I absolutely loved, never really thought about the Civil War from the perspective of women.

So, I believe that the more we have different perspectives on the same historical facts and events the richer our understanding of this history is. I'm very excited to be part of a broader group of writers from my continent who are sort of like writing back, you know, the empire writes back.