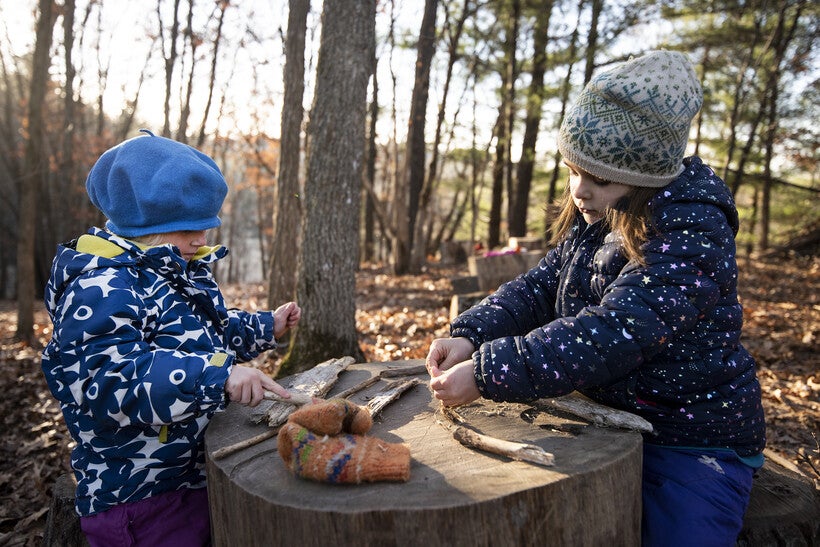 Five-year-olds Adelaide, right, and Maple, left, take the bark off of sticks as they play at the Kickapoo Valley Forest School on Tuesday, Nov. 23, in La Farge, Wis. Angela Major/WPR

With an emphasis on connecting to nature, some Wisconsin students spend their entire school days outside — despite the weather

More and more forest schools are popping up around the country, popular in the COVID-19 era and for kids to spend time in nature
By Madeline Fox
Share:

For most schools, the past two years have brought a complicated weighing of the risks of being in a classroom: in-person versus virtual learning, masks, class sizes, ventilation. But a growing number of schools around the country have sidestepped many of those concerns by leaving the classroom behind.

In La Farge, in the sprawling Kickapoo Valley Forest Reserve, 29 students show up at school each day and, aside from a daily nap, stay outside the whole day, no matter what the weather throws at them.

The Kickapoo Valley Forest School is only in its first year of being a full-day, full-week charter school. Previously, the forest reserve hosted a weekly outdoor learning program for half a day on Fridays. The outdoor education advocacy group Natural Start Alliance tallied 563 outdoor preschools and kindergartens last year, more than double the number in 2017 — including several day care, preschool and elementary-level programs in Wisconsin.

Each student at Kickapoo Valley Forest School, or KVFS, gets a full rain kit — boots, pants, jacket — and their families are sent extensive guidance on how to layer kids up to keep them warm, even when the temperature falls well below freezing. One student, a 5-year-old named Mia Shird, counted four layers of clothing on a 30-degree day in November.

"I have this coat under," she said, unzipping the top of her purple snowsuit to reveal a jacket, also purple, "Under this coat, I have this, and this is under this," she went on, pointing to a T-shirt and a sweater dress, "and then I’ve got these mittens!" 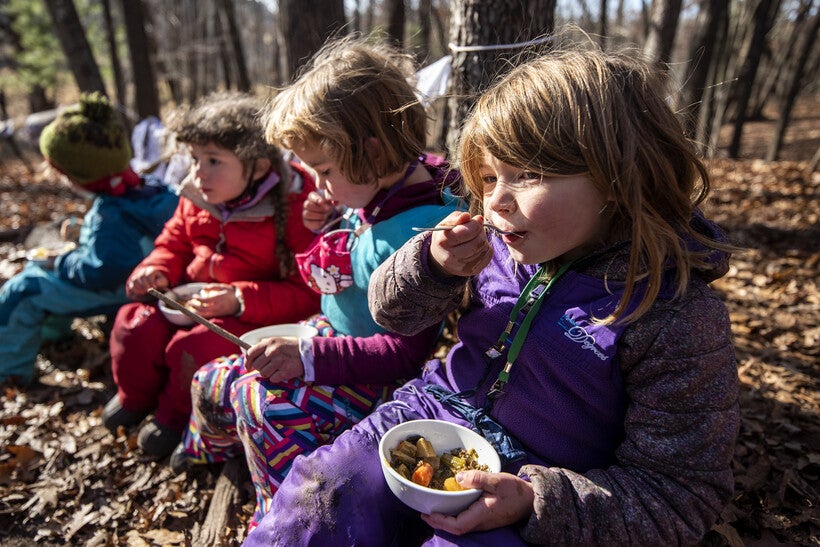 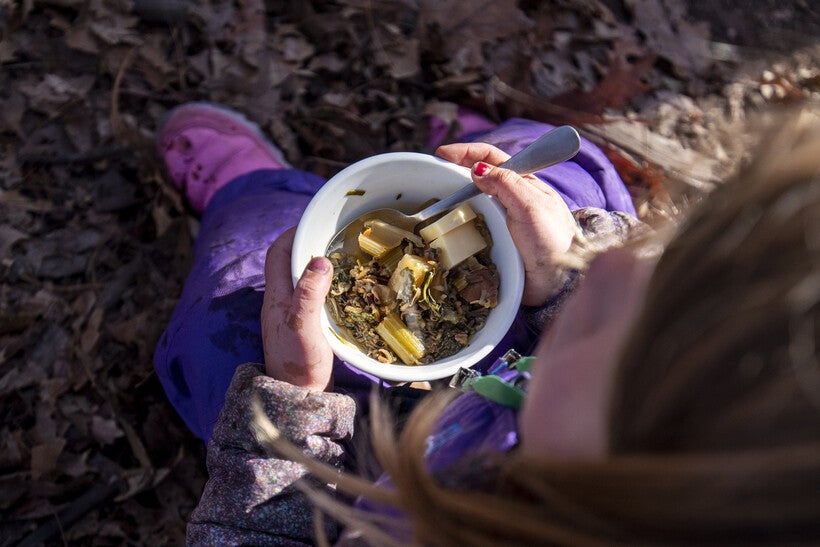 A Kickapoo Valley Forest School student eats soup the group of students made together and warmed over the fire Tuesday, Nov. 23, in La Farge, Wis. Angela Major/WPR

"There were children saying, like, 'When are we going inside?'" she said. "And we were able to say, 'Well, we’re not.' And now they don’t even ask anymore, they just love to be outside."

KVFS is a public charter school in the La Farge School District, located in southwest Wisconsin, about an hour east of La Crosse. At present, KVFS has spots for 32 kids in pre-K and kindergarten, but it will add first grade next year, and second grade the year after, as the current enrollees age up.

The flow of the school day can vary depending on what the environment is like.

The week before Thanksgiving, the students had to forego their usual hike — the kids typically log nearly 2 miles a day — because it was gun deer season, and hunters were out in the surrounding forest. When kids asked questions about it, as kids do, Kiesau explained it matter-of-factly.

"In Wisconsin, you can hunt deer for nine days right now," she said. "Because some people like to eat deer. Does your family eat deer? Some families do."

A lot of the kids’ learning has this experiential focus — they pick up fallen walnut hulls on a walk, for example, and teachers help them cook them down into dye to decorate plain white tees. Kids’ request to knock over an old stump turns into a lesson about how trees — living and dead — fit into the forest ecosystem. 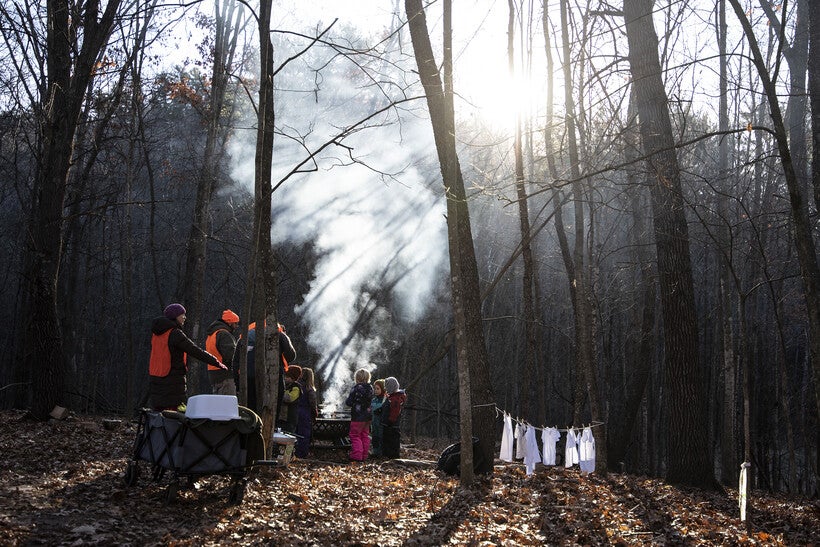 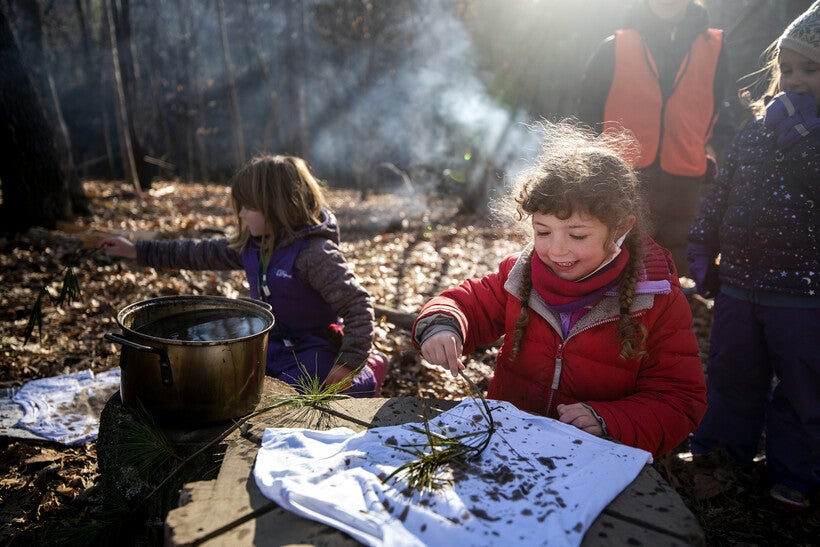 Ximena Puig, a teacher at KVFS whose background is in Waldorf schools, said she’s seen the kids grow in their understanding of the environment in just a few months of school.

They also have more traditional lessons. During the morning, teachers will bring out blankets or rugs and boxes of numbers and letters to help kids master basic concepts.

Jason Rood, a student teacher who’s assigned to the site as part of his teaching certification, had one student pick a number, then sent her out to grab that number of sticks and count them back to him. With another, he ran through letters and sounds.

"That’s the letter Q," he told Jet Oium, after they’d sounded it out together. 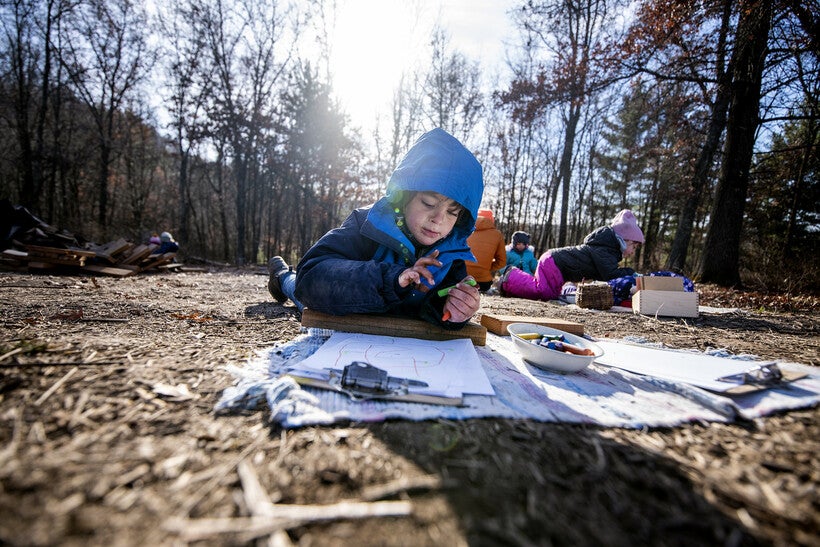 Outdoor education has a particular appeal in a pandemic, since research shows that coronavirus transmission is much lower outdoors, and kids and adults can more safely go unmasked in the open air. Kiesau said that was likely part of the appeal for some families who signed up this year, the school's first year.

But when teachers and administrators talk about the benefits of holding class outside, they keep circling back to the way it connects kids to their environment.

"The love that they start to develop for their environment, which is critical for our survival as human beings, that our children come to love and appreciate and care for the environment around them, that is happening because we’re out in it," Puig said.

To the northwest of KVFS, teachers at the Lac Courte Oreilles Ojibwe School in Hayward started taking students outside for class in spring 2021, when the school switched back to in-person instruction after nearly two semesters of remote learning.

The school has an outdoor space for ceremonies and school traditions that serves as an outdoor classroom. And teachers take their students on walks during lessons.

Mary Robinson, an Ojibwe language teacher for grades 9 through 12, said it was easy to shift her students to outdoor learning because Ojibwe started as a spoken, not written, language, so it was a natural fit to practice it while doing nature walks, in conversation with classmates.

"Especially for Native students, it’s really important for all of us to be connected still to the Earth and the environment and the outdoors," she said. "We’ve lost a lot of that by coming inside."

She took her classes outside throughout last spring and this fall, though she’s had to scale it back as the temperatures have dropped because, as she put it, "high school students don’t like to wear coats and boots very much."

Still, she said, the students really love being outdoors. Unlike elementary and middle school students, who have recess, high schoolers don’t often get to spend much time outside.

"I think it’s a shift that’s going to continue, and not just because of COVID," said Jessica Hutchinson, superintendent of the Lac Courte Oreilles Ojibwe School. "It’s a mental health thing, and not just for kids, but for staff. I think it’s therapeutic."

The teachers at the Kickapoo Valley Forest School see a similar effect. They say behavioral issues are fairly minimal, which they credit, in part, to kids being able to work out a lot of energy and flow more freely throughout the forest site during the day.

"Having a space where they can be loud and move and not have to stand in line or sit in a desk feels like such a gift," Puig said. "They’re able to move their bodies in all the ways that are developmentally appropriate." 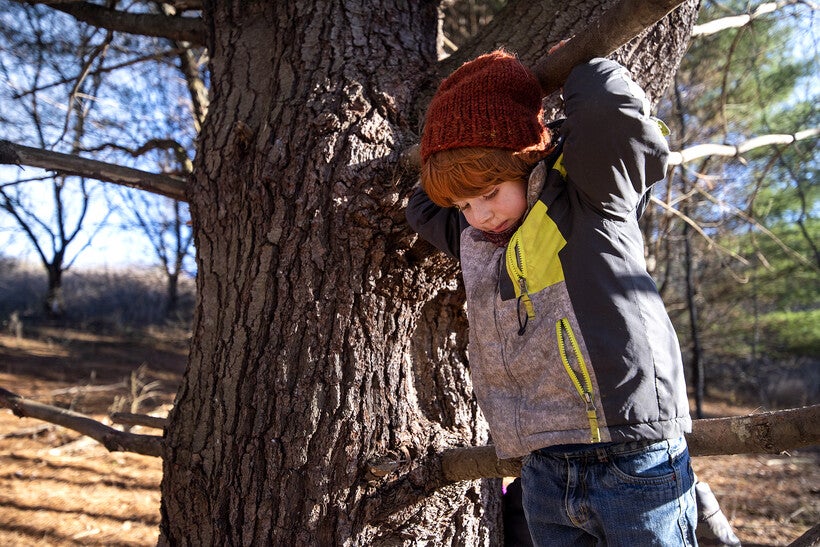 Kiesau and Robin Hosemann, KVFS’s assistant planning and leadership coordinator, have been doing site visits to other forest schools in the state to see what they can learn from more established outdoor programs. They’re also passionate about bringing educators curious about outdoor education to their own site, in the hope that more schools will incorporate outdoor learning.

It’s something Robinson, at the Lac Courte Oreilles Ojibwe School, thinks is possible even for schools that don’t have a forest at their disposal — though she has one piece of practical advice for schools that want to try.

"They would need handheld radios," she said. "It seems ridiculous, but definitely being able to communicate with staff outside of the building is a safety thing, so having that in place, that’s a big one."

After that, though, she said it requires teachers to have pretty good control of their classes, and to have clear expectations for students.

"Lesson plans, all those things still need to be in place," she said. "That mentality of: We’re learning outside today, we’re still going to cover material, it’s still going to be academically focused, but we’re going to move outside and have a different environment for it." 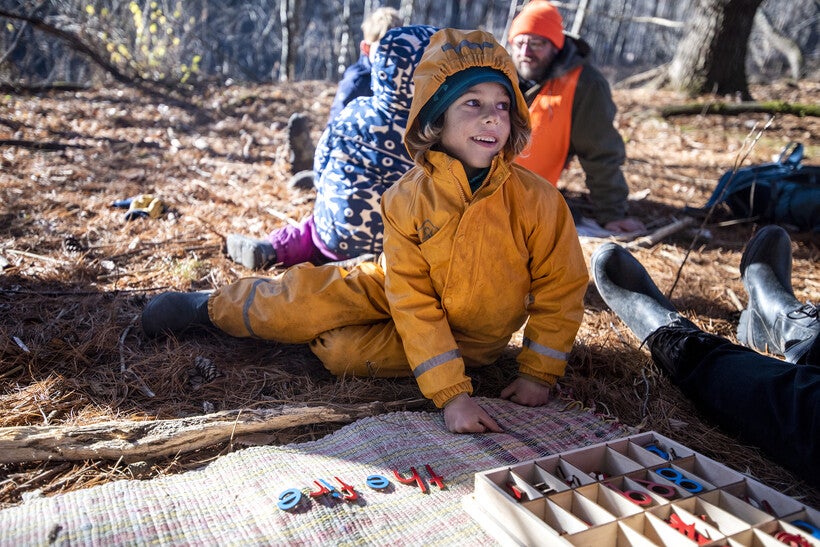 Levon, a student at Kickapoo Valley Forest School, spells words with letters on a blanket during a lesson Tuesday, Nov. 23, in La Farge, Wis. Angela Major/WPR