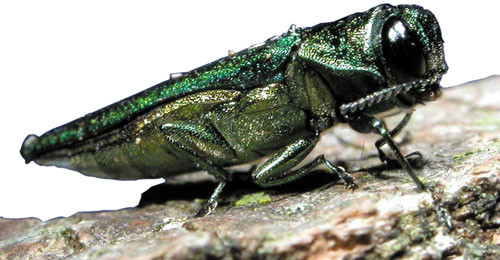 Emerald Ash Borer Is On The Attack In Wisconsin

Wisconsin's ash trees continue to die because of emerald ash borer infestations that have spread throughout southern Wisconsin in recent years.

State officials said that about 20 counties in Wisconsin have had to deal with the insects. The ash borer was discovered in the city of Detroit 11 years ago and has now spread througout the Midwest.

With no easy ways to stop the spread of the insects, officials are now looking for ways to contain them, typically by setting up quarantine areas around the state. They said that when an ash tree finally dies after an infestation, that is an indication that the tree has been an infected for three or four years.

Ash trees typically don't survive an infestation, but homeowners or community members can fight back. Brian Kuhn, director of the Plant Industry Bureau of Wisconsin Department of Agriculture, Trade & Consumer Protection, said people can seek to stop the infestations in order to save certain high-value trees.

“There are pesticide products that effectively control the ash borer in a given tree," Kuhn said.

This method will not work for a forest of trees because the ash borer does its damage under the bark and spraying the canopy will not kill the insects.

Kuhn also said treating the ash tree on a “preventive basis is better because it tends to be more effective and smaller trees move the pesticide quicker through the system.”