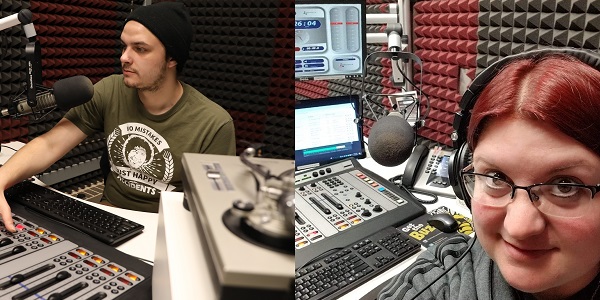 The UW Superior Foundation has two scholarships for individuals who are pursuing audio production careers. The recipients of this year’s scholarships have been announced. Eliot Sweere has received the Ted Garver Scholarship, and Jackie Fontaine received the Ben L Munson scholarship.

The Ted Garver Scholarship was created in honor of Ted Garver; a Chisholm native who had a passion for education and was an avid follower of Yellowjacket Sports.  His son Jon Garver has been the voice of many UWS sports broadcasts and was a student at UWS and a member on the UWS Hockey team.  The elder Garver was able to drive outside of Chisholm to the top of the mine tailings hills to listen to the hockey games being broadcast on KUWS.  His family and friends memorialized that connection in 2004 through a scholarship that benefits students who work at KUWS and are committed to support the role public radio can play in building community.

This year’s recipient of the Ted Garver Scholarship is Elliot Sweere, a senior at UWS and integral part of the WPR’s Northern Region team.  Sweere is the lead student engineer at the bureau as well as the Director of Sports Broadcasting and has been a very important part of the team since 2017.  He was the student engineer for People of Color a long-standing program on KUWS as well as the Alabama 35 documentary, and in 2019 was one of five college students nationally selected to attend the Public Radio Engineers Conference in Las Vegas.

Jon Garver and his family are very pleased that Sweere was the scholarship recipient.  “I have had the pleasure of working with Eliot on sports broadcasts for two years.  Eliot is a selfless person who is always there to help others, and it was very rewarding to know he is the recipient.”

The other UW Superior Foundation Scholarship awarded is the B.L. Munson Memorial scholarship.  Ben Munson grew up in Amery Wisconsin and after military service in World War II and the Korean Conflict he graduated from the Brown Institute of Broadcasting and had a long career in broadcast and print media in the upper Midwest. Ben’s wife Juanita and their son, retired WPR Northern Regional Manager John Munson, started the scholarship in 1996 to encourage students interested in pursuing a broadcasting career.

This year’s recipient is Jackie Fontaine. Fontaine has recently taken on the role of Operations Director for the station after having discovered WPR’s Northern Region Bureau quite by accident.  As a non-traditional student Fontaine signed up for a giveaway drawing in the fall 2018 during welcome week.  Fontaine says did not know the WPR Northern Regional Bureau existed, but when she arrived at the station to pick up her prize, she quickly signed up to become a DJ.  Fontaine had long been involved with local music and had equipped a recording studio in her home. She says this position has allowed her to hone her announcing skills and learn about broadcast production, while sharing her passion for local music. "Being a recipient of the Munson Award,  means that I can dedicate that much more time to not only my studies, but also to the things that enrich my life and my character."

“Jackie and Eliot are wonderfully talented student workers who are assets to the entire Northern Region team,” said Paul Damberg, Northern Regional Manager. “they will be integral part of our recording team as they teach new students the art of production recording and editing”