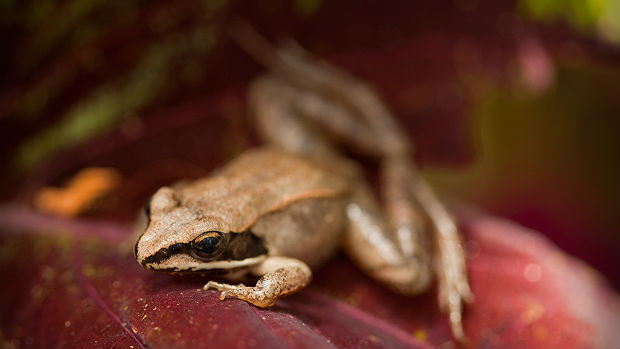 The El Niño that started in early 2015 and is affecting global weather patterns could be less than idyllic for Wisconsin wildlife adapted to snowy conditions.

The National Weather Service forecasts the El Niño effects in Wisconsin to possibly result in winter temperatures that are above normal and a chance of lower than average precipitation. During the previous major El Niño, in the winter of 1997-'98, snowfall was up to 10 inches below average in Wisconsin, partly due to temperatures being 7 to 8 degrees Fahrenheit above average.

Lack of snow can hamper winter camouflage and hibernation for some Wisconsin animals.

"There are a number of species in Wisconsin that are specifically adapted to the winter season," said Ben Zuckerberg, an assistant professor in the Department of Forest and Wildlife Ecology at the University of Wisconsin-Madison.

Some species might find themselves more vulnerable to natural predators. For example, the snowshoe hare goes through a coat color change from brown in the summer to white in the winter to escape predators. Changes in day length primarily trigger this change, and if snows arrive late or melt early, these hares can find themselves standing out in an atypical winter setting.

The wood frog adapts to winter by using the snow as insulation.

"Under the snow is vastly different than what species are experiencing above the snow, and it is much more stable," Zuckerberg said.

To hibernate, wood frogs "burrow right into the snow-soil interface," Zuckerberg said. "They actually go through a whole-body freeze, which is a pretty amazing body adaptation."

While they hibernate throughout the winter, wood frogs remain very sensitive to temperature fluctuations.

"When you have snow cover that comes and goes with a milder winter, they potentially could be impacted by those changes," Zuckerberg said. That physiological stress could lead to a lower survival rate.

He said the current El Niño may give wildlife a taste of what winter conditions could be like in Wisconsin in the next 50 years, with average temperatures 3 to 5 degrees warmer and shorter winters with less snow cover.

"Most of the wildlife in the upper Midwest are used to seasonality, but there is growing concern that the variability in winter climate is beyond what many of the species have adapted to because of modern climate change," he explained. "In fact, there is growing evidence that some species are moving north in response to these changing winter conditions."

In contrast, insects are not likely to be affected much during an El Niño winter.

Wisconsin can see variation year to year in the population of any given insect species, but whether the changes are due to weather conditions or other factors is difficult to determine, said University of Wisconsin-Extension entomologist P.J. Liesch.

"El Niño may not have as big of an effect as we might expect," Liesch said. "In some cases, things just happen, and we don’t necessarily know why; a particular insect just has a really good year."

The effects of winter on insects depend on the species. For example, mosquitoes rely on standing water to breed, and melting snow is one source of that for some species.

"The amount of snow could affect them to some extent," said Liesch.

"Overall if we had a warmer winter, is that going to drastically affect insects or ticks that relate to human health? Probably not in the grand scheme of things," he added. "Many insects and ticks in our area are adapted to survive the winter. However, what may affect them most noticeably is the weather that follows in the spring and summer."

A warmer winter going into spring might "cause insects to be active a little bit earlier," Liesch said. "Assuming there's the appropriate conditions, some mosquitoes may be able to reproduce more throughout the year because they will have more opportunities."

However, increased insect breeding will not necessarily lead to more humans getting sick from insect-borne diseases.

"The mosquitoes that cause the most problems for humans, such as those that transmit West Nile virus, depend on certain conditions to reproduce, which can differ from the conditions that favor other nuisance mosquitoes," Liesch said.

If weather conditions are perfect for the mosquito that carries the West Nile virus, including a very early spring and ideal conditions throughout the year, Wisconsin might see an increase in West Nile, Liesch said.

West Nile virus was first detected in humans in Wisconsin in 2002, with 52 cases. 2012 had the most cases, with 57, according to the Wisconsin Department of Health Services. Liesch notes that 2012 was a dry year, suggesting that weather does not necessarily affect the population of the mosquito that carries the West Nile virus.

Wisconsin is generally more sheltered than elsewhere in the world when it comes to the effects of El Niño. For example, a study published in Proceedings of the National Academy of Sciences analyzing 18 years of data links dengue fever epidemics in Southeast Asia with El Niño’s higher temperatures, suggesting the possibility of an increase in cases in that region in 2016. Mosquitoes carry the dengue virus and transmit it to humans when biting them.

As for Wisconsin's ticks, these arachnids are insulated from winter conditions and sudden temperature swings because they spend their time on the ground amongst leaf litter, Liesch explained.

Early tick activity due to a warmer winter going into spring could potentially lead to more Lyme disease, Liesch said, but the scenario is complicated. One mild winter isn't enough time to increase the tick population because they have a long life cycle, taking two years to transition from egg to adult. Even if weather conditions in early 2016 are favorable to ticks, any population effects might not be observed until the following year.

However, a warm winter could benefit small rodents that are hosts to ticks and could lead to more favorable conditions for the spread of Lyme disease. Additionally, a warmer winter means ticks might become active earlier in the year, so people might find ticks on themselves or their pets earlier in the season.

"With a warm winter when everything melts out in February, people may not be thinking about checking for ticks," Liesch said.