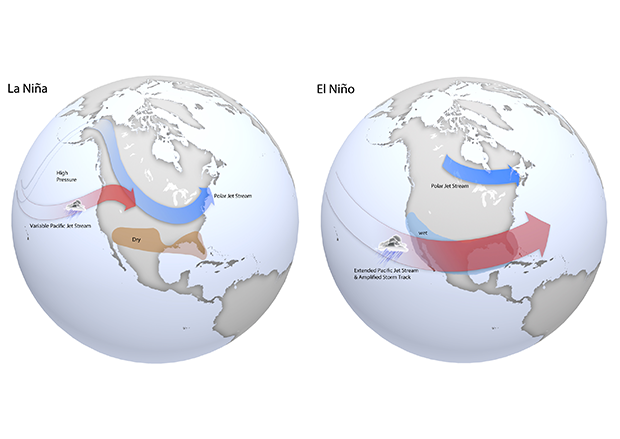 The weather phenomenon most commonly called El Niño is one part in a cycle of irregularly changing trade winds and sea surface temperatures in the equatorial Pacific Ocean. Trade winds are westward flowing surface winds in the tropics, named for their historical importance to sailing ships. They are instrumental in influencing global weather patterns.

Together, these phenomena drive a global weather cycle called the El Niño Southern Oscillation, or ENSO. This swing in ocean temperatures can disrupt the Pacific trade winds, with wide-ranging, complex and often unpredictable consequences for weather patterns around the world, particularly south of the Equator.

The name "recognizes that the ocean and atmosphere work together to produce these kinds of conditions," said University of Wisconsin-Madison climatologist Dan Vimont in a Nov. 4 interview with Wisconsin Public Radio’s "Central Time."

Climatologists use many measurements to quantify ENSO -- some of them quite complex -- but they all come down to how much atmospheric pressure and sea surface temperatures deviate from the average. The more these conditions depart from average in intensity and time, the stronger an El Niño or La Niña is said to be. When conditions stay close to normal, climatologists call that an "ENSO-neutral" period.

El Niño events take place every three to seven years, in an irregular cycle that climatologists are still working to put into historical context. The impacts of a strong El Niño vary widely around the world and from one ENSO event to the next, but they are most pronounced in the Southern Hemisphere. Commonly observed historical effects include droughts in Australia, India, and southern Africa. El Niño can also wreak havoc on fishing in eastern-Pacific countries like Peru, because the warm waters it brings are less rich in nutrients for fish than colder waters.

Vimont pointed to how small variations in oceanic temperatures can have global weather effects, in a Sept. 4 interview on Wisconsin Public Television’s "Here and Now."

"It's 2 to 3 degrees Celsius warmer than usual. That doesn’t seem like much, but you have to keep in mind that the Pacific Ocean is the biggest ocean basin in the entire globe. This (El Niño) involves a complete reorganization of the entire climate system in the Pacific," he said.

A new animation from the World Meteorological Organization offers an engaging look at the basics of El Niño and its impacts around the world:

Although it isn't entirely clear who first used the the term "El Niño" to describe this phenomenon, it originated in South America, and a common anecdote has it that Peruvian fishermen coined the term in the late 19th century. Niño is a Spanish term for a male child. In this case, it specifically refers to the Christ child, in a nod to the phenomenon’s affects becoming noticeable around Christmastime in late December. Its opposite was then named La Niña ("the little girl"), its linguistically feminine counterpart.

People have observed weather effects likely linked to ENSO for at least 300 years. Many historical sources credit an English-Australian scientific polymath named Charles Todd for the first inkling of the system. Todd, who lived from 1826 to 1910, distinguished himself in roles ranging from astronomer to postmaster. While working for the state of South Australia in 1888, he published observations positing a relationship between high air pressures and roughly simultaneous droughts in Australia and India. A broader understanding of ENSO ensued when Swedish meteorologist delved into global patterns in air-pressure variations in the late 1890s, and when British scientist Gilbert Walker drew connections between air pressure variations and the varying strength of India's monsoons. Walker is credited with coining the term "Southern Oscillation."