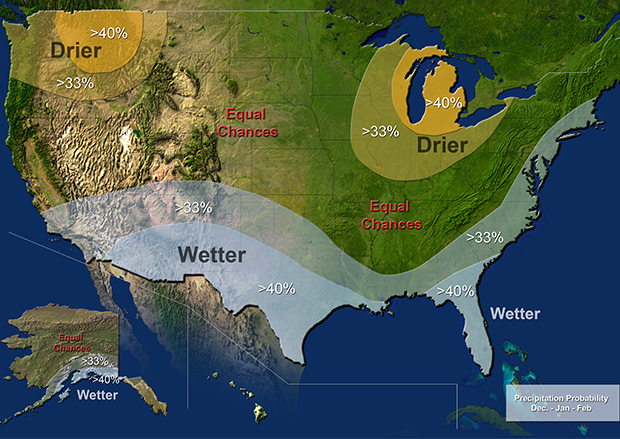 In October 2014, climatologists were still predicting El Niño-influenced weather shifts that eventually did not pan out.

The El Niño Southern Oscillation is an irregular cycle in which changing temperatures of surface waters in the tropical Pacific Ocean can result in major impacts on global weather patterns. Conditions that indicate an El Niño event is developing -- warmer than average temperatures of water in Pacific tropics -- typically occur during March through May. If this pattern persists into winter, El Niño conditions may develop if those warmer temperatures continue. But that doesn’t always happen, and 2014 is an example of how unpredictable the cycle can be.

In early 2014, conditions in the Pacific indicated an El Niño was taking shape. In early March of that year, the Climate Prediction Center with the National Oceanic and Atmospheric Administration issued an "El Niño Watch." "(O)ceanic and atmospheric conditions in the tropical Pacific Ocean are favorable for the development of El Niño within the next six months," NOAA reported. Between February and April, an area of warmer than average subsurface water temperatures moved east toward South America and approached the surface. Such a pattern can lead to an El Niño, but forecasting its emergence is inherently uncertain given variability in how and when the eastern Pacific Ocean becomes warmer.

In April 2014, meteorologist Eric Holthaus on Wisconsin Public Radio’s "Central Time" noted that "(t)his is the time of the year that is typically known for having the least predictability, so it’s still up in the air whether it’s going to happen or not." He indicated an "outside chance that things could change," but water temperatures in the Pacific and long-range weather models were indicating then that an El Niño was developing. And as summer approached, conditions signaling a potential El Niño were still present in the Pacific.

With an El Niño beginning to look increasingly possible, NOAA launched its ENSO Blog to track and discuss the ongoing development of the cycle.

NOAA was still forecasting in early June that El Niño was very likely to develop by winter. But it also noted subsurface oceanic temperatures were getting cooler in a pattern that diverged from the temperatures during the record-setting 1997-'98 El Niño.

Additionally, atmospheric conditions that accompany an El Niño event -- in which air pressure gradients over the eastern and western Pacific Ocean shift, with highs developing over the Indonesian archipelago -- weren't developing. This lack of atmospheric pressure shifting (that is, wind) persisted through July, and come August, the chances of a winter El Niño were not quite as high as they were earlier in the summer.

"It still looks like El Niño is trying to kick in a little bit, although it is not as strong as it looked a couple of months ago," Chad Franzen, a meteorologist with WSAW-TV in Wausau, said in September on Wisconsin Public Radio’s "The Joy Cardin Show."

Even as fall progressed, long-range weather forecasting suggested El Niño conditions could influence temperatures and precipitation in North America. Pointing to the ongoing drought in California, NOAA’s 2014-'15 winter outlook published in mid-October, noted that while the "much-hoped-for El Niño has not materialized," the state still had a chance for near or above average precipitation. Moreover, its maps offering winter temperature and precipitation forecasts resembled those typical during El Niño years. (These long-range forecasts ultimately turned out to be closer on the mark for temperature than with precipitation, which is consistent with the increased amount of uncertainty that comes with El Niño-like conditions.)

By November, NOAA forecasters again lowered the probability for an El Niño event to develop over subsequent months. By early 2015, though, it failed to emerge.

"El Niño requires a cooperation between the atmosphere and ocean, but there are chaotic dynamics and variations in the atmosphere that can come in and ruin that cooperation," UW-Madison climatologist Dan Vimont said about the ENSO cycle in 2014. "That’s what happened last year. The equatorial winds never really allowed that event to take off. So, it fizzled."

A look at the Southern Oscillation Index, which tracks tropical Pacific Ocean air pressures to gauge the potential for an El Niño or La Niña event, highlights what happened over the course of 2014. Positive ratings prevailed over the first half of that year, which signifies conditions conducive to a La Niña. Over the second half of 2014, the index veered into negative ratings, indicative of an El Niño. But these levels were relatively mild, particularly when compared to those for actual El Niños. And in February 2015, the Southern Oscillation Index dipped ever so slightly back into positive range.

These relatively mild conditions didn't last long, though. As spring returned to the Northern Hemisphere in 2015, the Southern Oscillation Index returned to negative ratings that strengthened to levels comparable to previous El Niños. Moreover, water temperatures in the equatorial  eastern Pacific Ocean were again growing warmer than normal. Both indicators of a growing El Niño have persisted into the autumn of 2015. As climatologists and meteorologists who research and track the ENSO cycle repeatedly note, the emergence of any given El Niño is highly variable, as indicated by the difference between 2014 and 2015.