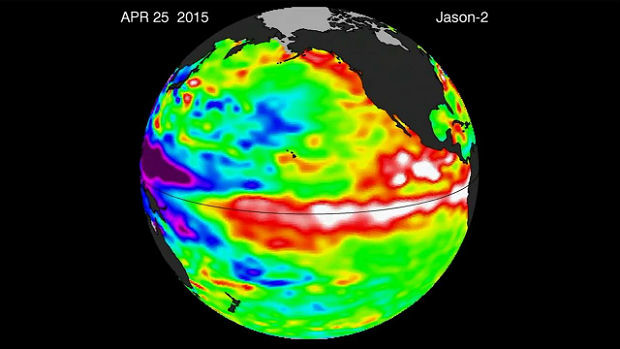 Conditions Are Comparable To Previous Record-Setters
By Scott Gordon
Share:

The current El Niño is on track to be one of the strongest recorded. Indicators of a strong cycle have been increasingly documented over much of 2015 and continued to mount into autumn. The National Oceanic and Atmospheric Administration forecasts that this El Niño will continue into 2016 and gradually taper off in the spring months.

Climatologists -- who tend to be cautious with predictions about the El Niño Southern Oscillation -- increasingly expect the 2015-'16 El Niño to be comparable to record-setting cycles in 1982-'83 and 1997-'98.

But the variability of the ENSO cycle is still an essential qualification for any forecast -- while the El Niño in 2015 is so far following a roughly similar arc to those previous years, it could well play out very differently in terms of how long it lasts, and its impact on seasonal weather patterns.

As Eric Guilyardi, a climate scientist at the University of Reading in the United Kingdom, explained for NOAA, it’s challenging for even the most sophisticated climate models to capture and predict the complex mechanisms behind ENSO.

"This is a strong El Niño, but it is very different from the last two major ones, in terms of the evolution of the event and the structures in the tropical Pacific," said University of Wisconsin-Madison climatologist Dan Vimont, whose research includes work on interactions between the ocean and atmosphere in the tropics.

Meteorologists are generally forecasting El Niño will bring a warmer, drier winter to the Midwest over the winter of 2015-2016. A three-month precipitation outlook that NOAA issued in mid-October shows the entirety of Wisconsin has about an equal probability for average, above average, or below average precipitation during winter months, which again drives home the inherent uncertainty of making definite predictions about ENSO's effects. A corresponding temperature outlook issued in October showed the whole state had decent odds for a warmer winter, but in different bands of probability, with the highest likelihood of warmer temperatures in northeastern Wisconsin and stretching into Michigan’s Upper Peninsula. In fact, the details of those outlooks have changed as climatologists have tracked ENSO throughout the year, showing different probabilities for variations in temperature and precipitations in given regions from one report to the next.

"El Niño has a huge impact on our temperature," said Vimont in a Nov. 4 interview with Wisconsin Public Radio’s "Central Time." "I am confident that this year will be the warmest year on record globally."