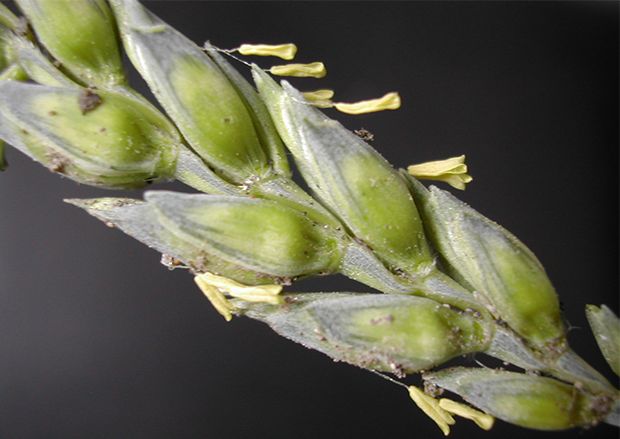 A spike of winter wheat.

Agriculture depends entirely on weather, with its uncertainties affecting the fortunes of all people, from small farmers to consumers, as the global market shifts food prices. The El Niño Southern Oscillation cycle, which is driven by water temperatures in the tropical Pacific Ocean, can have major effects on global weather patterns.

An El Niño event first observed in early 2015 is forecast to persist through early 2016. It is the strongest since 1997-'98, and its effect on weather patterns is creating serious difficulties with agricultural conditions in the tropics. In the continental U.S., the northern Great Lakes region and the northern Rocky Mountains could see drier than average conditions, as forecast by the National Oceanic and Atmospheric Adminstration. In contrast, parts of California, the southwest and the southern Plains are likely to see wetter weather by early 2016.

Nationally, El Niño conditions in 2015 have damaged crops. Spring and summer rains delayed planting of corn and soybeans in the eastern Corn Belt -- western Ohio, Indiana and Illinois -- and of rice in the South, driving up futures prices. Meteorologists have suggested El Niño is responsible for the excess rainfall, 200 percent of normal, over the eastern Corn Belt. Meanwhile, floods and droughts are affecting rice production in southeast Asia, which might in turn affect the global rice market as national stockpiles are consumed.

During previous El Niños, yields of corn, wheat and rice typically have fallen, while soybean yields have increased, a 2014 study found. Its authors also noted the uncertainty of overall impacts of the El Niño Southern Oscillation on global crop yields.

In Wisconsin, the current El Niño is forecast to raise the chance of warmer than normal temperatures over the winter of 2015-'16, and may result in below average precipitation. These conditions, though less extreme than elsewhere in the world, could affect Wisconsin agriculture. For example, a cold winter gives Wisconsin farmers a natural advantage in fending off pests. If El Niño and/or long-term climate change reduce the frequency or intensity of winter freezes, that could put a lot more pest pressure on crops, said Sarah Lloyd, a Columbia County dairy farmer and special projects director for the Wisconsin Farmers Union.

As in previous summers before an El Niño winter, Wisconsin is experiencing a good year for soybeans, said University of Wisconsin-Extension soybean specialist Shawn Conley. Wisconsin farmers planted a record number of soybean acres, and the average yield is projected to be the second best in history.

"We’ll see record production in Wisconsin in 2015," said Conley, who is also a UW-Madison agronomy professor.

Meanwhile, weather changes spurred by El Niño could harm Wisconsin crops that rely on snow to insulate them from the vagaries of winter. Warmer temperatures could mean less snowfall and less snow on the ground, causing problems for Wisconsin’s fruit, winter wheat and alfalfa crops, which rely on snow cover to protect them. Crops benefit from the complex interplay of snow providing protection to roots and soil from extreme cold.

Planted in October and harvested in July, winter wheat relies on a layer of snow to protect it from colder temperatures.

"Even an inch of snowfall protects winter wheat," Conley said.

Warmer than average conditions can also have an affect on the crop.

In what is called a "false spring," a warm spell in February could prompt winter wheat to break its dormancy and start growing sooner than normal. If a cold snap follows, the crop can be damaged and farmers may have to replant.

"We can be at a higher risk of losing acres because of winter kill," Conley said.

Wheat needs to adjust gradually to cooler temperatures. When wheat breaks winter dormancy due to an unexpected warm period in January, February or March, a sudden drop in temperature or very cold temps endangers these plants and can lead to plant mortality, in a circumstance called winter kill

Alongside reduced grain production, the dairy industry could take a hit with a warmer winter because it relies on straw produced from the wheat stalks.

El Niño conditions could also affect the production of alfalfa, a perennial crop planted in August that is important to the dairy industry.

"Even if it is in its second or third year of production, El Niño can hurt overall productivity," Conley said. "The lack of snowfall and snow cover will impact any of these winter crops out there."

Wisconsin’s fruit trees rely on snow as an insulation layer to keep soil from freezing deeply and damaging the trees’ roots. A warmer winter with rapidly shifting temperatures can cause problems for these growers, said UW-Extension fruit crop specialist Amaya Atucha.

If the soil freezes and roots are damaged, then trees will have trouble taking up water and nutrients during springtime, when they start growing. Depending on the extent of the damage to the root system the entire tree could die.

“The biggest problem is the swing of temperatures,” Atucha said about the potential effects of a strong El Niño winter.

"In the middle of the winter, even when trees are dormant and fully acclimated, if the temps drop below -15 (degrees) Fahrenheit, there will be damage," Atucha explained. And if a warmer winter results in a false spring in which trees come out of their dormancy and temperatures subsequently drop again, "we can have damage because the trees are losing the ability to resist the cold.”

Atucha is not concerned that temperatures this winter will be too high for Wisconsin’s fruit trees.

"Even if the winter is milder, we are still going to have enough chilling hours," she said. In addition, this fall’s warm temperatures should benefit fruit trees, allowing them to accumulate enough reserves after harvest to survive winter.

One benefit of a major El Niño winter may be that farmers will be able plant earlier for the 2016-'17 growing cycle.

"We might see quick establishment of crops," said Conley.

Over a typical Wisconsin winter and spring, snow accumulates on the ground and then gradually melts into the soil, ideally leaving farmers with good moist conditions for spring planting. A typical winter’s snowmelt also helps crops endure potential spells of dryness and extreme heat in summer.

Although forecasts for the 2015-'16 El Niño indicate a possibility for below average precipitation in Wisconsin, a winter with more snow or more freezing rain, or perhaps a wetter spring could throw off the cycle in which Wisconsin’s soil recharges its moisture in the spring.

"If the soil is frozen already, (rain) will just run off and so it won’t recharge," said Christopher Kucharik, a UW-Madison associate professor of agronomy and environmental sciences. "If the soil is not frozen, it will gradually move through the system at a time when plants are not actively growing, and that’s not necessarily a good thing either."