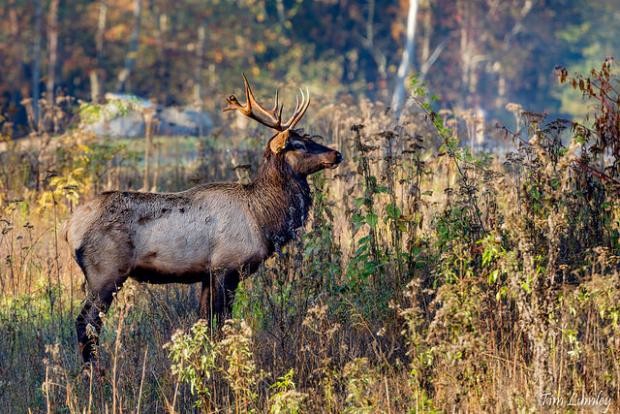 The Wisconsin elk herd is growing thanks to elk from Kentucky being relocated. Photo: Tim Lumley (CC-BY-NC-ND).

Over The Next 5 Years, Up To 150 Animals Will Arrive From Kentucky
By Judith Siers-Poisson
Share:

For the past 25 years, the Department of Natural Resources, the University of Wisconsin and other groups have been working to reintroduce elk to Wisconsin after the species disappeared from the state in the middle of the 19th century.

Elk were once a common feature of the state's landscape and were found in nearly three-quarters of its counties. But thanks to overhunting by European settlers in the 1800s and habitat loss, the population was wiped out.

In 1989, a study was undertaken to assess the feasibility of reintroducing not only elk, but moose and caribou to the state. While researchers decided that neither moose or caribou could be successfully reintroduced, they deemed the return of elk to be viable.

A few years later, the state Legislature authorized biologists at UW-Stevens Point to investigate re-establishing a herd in the vicinity of Clam Lake in the Chequamegon-Nicolet National Forest. Finally, in 1995, 25 elk were released and the herd was re-established.

Scott Craven is an emeritus wildlife specialist with the UW-Extension and UW-Madison’s Department of Forest and Wildlife Ecology. He said that since that first herd was relocated to Wisconsin, there has been a hope for them to spread and to multiply, even to the point where a limited hunt might be possible.

Craven said that the initial herd did not increase as quickly as desired. But collaboration between the Rocky Mountain Elk Foundation, the DNR and other Wisconsin groups, including native tribes, resulted in plans for a second herd to be established near Black River Falls.

Of course, a necessary element of this plan was to find available elk.

"Fortunately, a source population was readily available in Kentucky, where their restoration efforts just went crazy. There are a lot of elk in the coal country of western Kentucky," Craven said.

An agreement was reached, and now up to 150 Kentucky elk are slated to be relocated to Wisconsin over the next five years, with up to 50 captures per year allowed.

Craven said that DNR staffers went down to Kentucky and were able to capture nearly 30 elk earlier this year. After a month-long quarantine, those animals will be transported to Wisconsin, where they will spend an additional 90 days in health quarantine. After that, they will be released near Black River Falls.

Any elk captured in 2016 will be added to the Clam Lake herd, which still has a population of fewer than 200 animals even after nearly 20 years.

In the long term, the DNR’s goal is to grow the new herd to about 390 elk in Jackson County and to increase the existing herd to 1,400 animals in Ashland and Sawyer counties around Clam Lake.

"Hopefully, within the next two or three years, Clam Lake will get a boost, the new site will take off and the elk restoration project will be moving right along," Craven said.

Elk restoration is not only an effort to return a former resident to the landscape — it also provides an opportunity for residents and tourists to enjoy wildlife.

"They’re big, they’re beautiful, and they’re very charismatic … The bugling that they do during the mating season is one of the attractions — people get really excited to hear that. And the antlers on the bulls are really spectacular," Craven said.