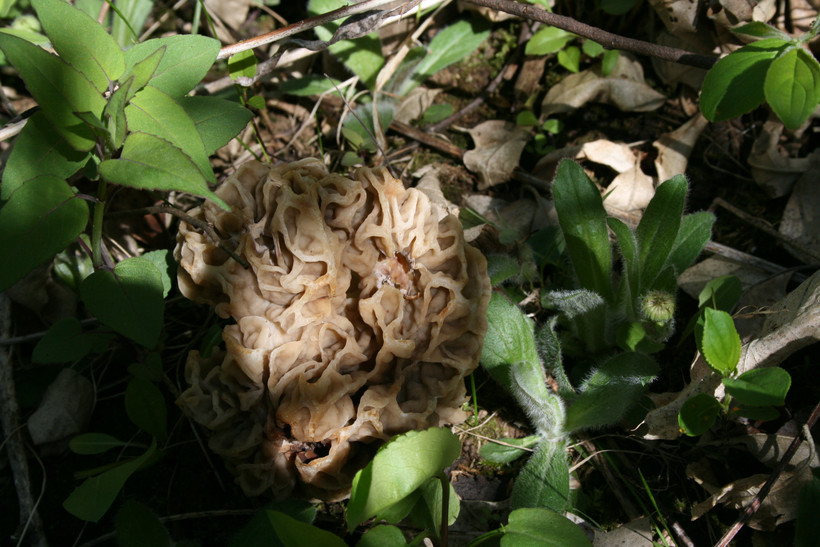 In this photo taken on May 16, 2009, a morel mushroom spotted during a mushroom hunt and cooking class is seen in West Bend, Wis. M.L. Johnson/AP Photo

Foraging season is in full swing, and there’s a multitude of wild plants in Wisconsin you can add to your soups, salads and sandwiches this spring and summer.

"I don’t care where you live, I don’t care if you’re in downtown Milwaukee. There’s good foraging near your house, maybe in your backyard," said Sam Thayer. Thayer is an expert in edible plants, a maple-syrup producer, a wild rice harvester,  organic orchard owner and the author of several books on foraging.

"To me one thing that’s so exciting about foraging is you can have these really good foods that you can’t buy anywhere," Thayer said.

Before you get started, the number one safety tip for foraging is to not eat anything that you can’t identify, Thayer said. It’s also best to start with one plant, and add to your knowledge slowly from there.

"Most likely you already know a plant that you don’t know is edible. And that’s the easy way to go, one plant at a time. And within a short period of time, you’ll have learned six or seven, and all of a sudden the landscape starts to look different around you. It starts to look like a very complex garden, rather than just a bunch of random greenery," he said.

A really popular wild edible right now is the morel mushroom, and it's in season.

Morels have a distinct spongy webbed cap. Good places to look for them include in and around dead elm trees that still have bark on their branches, old and dead apple trees, old and dead butternut trees, and white ash trees living or dead.

Thayer said to be careful of false morels, mushrooms that look similar to actual morels but aren’t edible.

"The false morel kind of has a gangly, convoluted cap, whereas the true morel is hollow. And the real morel has kind of the honeycomb-like surface with a network of ridges. The false morel is more just folds," Thayer said.

They look similar at a glance, but it’s easy to tell the difference if you actually pick them up, he said.

Other plants you can forage for in Wisconsin right now include caraway, pepperweed, leeks or ramps, and dandelion greens.

"Caraway was grown for hundreds of years as a green leafy vegetable and as a root vegetable," Thayer said. Most people only know about the seeds because they’ve been commodified. But the entire plant is edible. It grows in slightly moist soil and is more common in northern Wisconsin. Thayer cooks it in a traditional Norwegian soup or fries it up with other greens.

Pepperweed is another Wisconsin green, abundant throughout the state. It’s best to forage for it now and into the first or second week of June, Thayer said. "You find pepperweed anywhere that’s disturbed, dry and usually sandy. Every listener has seen it," he said. It’s similar to broccoli in taste, but with a slightly spicy zing, he said.

Other edible plants to look out for include violets, nettles, fiddleheads, wild asparagus, creeping bellflower and pheasant back mushrooms.

"Foraging encapsulates all the good things in life into one activity. You get exercise, you get really delicious and really nutritious food, it gets you out appreciating nature. It’s a great way for all the generations of a family to do something together outside. I can’t think of one reason not to go foraging," Thayer said.