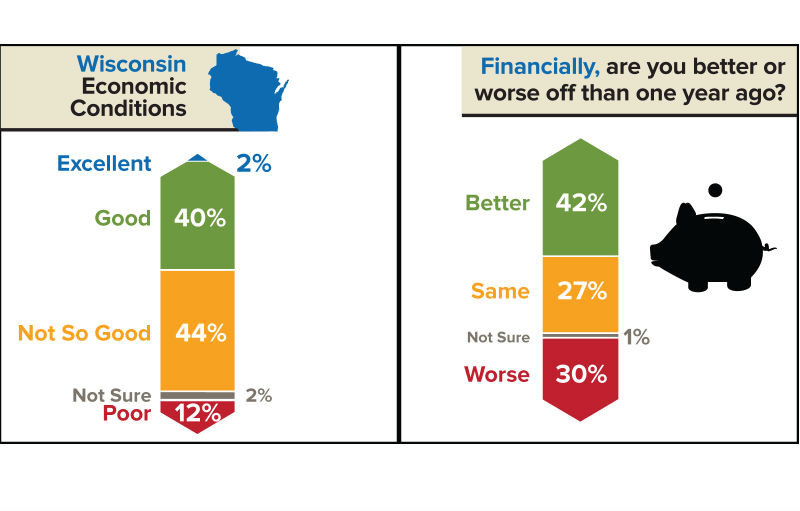 Despite the majority of Wisconsin Survey respondents agreeing that the state economy isn't looking so good,  42 percent said they’re better off financially than they were a year ago.

St. Norbert economist Kevin Quinn said that when it comes to a more optimistic idea of our personal finances, Wisconsinites are following a national trend.

“This is part of a trend that’s been going on for some time, not just here in Wisconsin but uh nationwide. It’s been a long, slow, but actually reasonably steady crawl out of the hole over the last several years,” Quinn said.

Even though things have been improving over the last few years, the economist said people weren’t feeling that way until very recently.

“I think what we’re seeing is people’s, uh, sensations about how the economy is doing is beginning to catch up with how it’s doing,” he explained.

Quinn attributed the dip in survey respondents’ rating of how Wisconsin’s economy is doing to a change in the narrative of the state’s economy. In the fall — the last time the Wisconsin Survey collected results — the gubernatorial election pushed the message that Wisconsin’s economy was doing better.

Since then, Quinn said the public debate about many elements of the budget have made people more aware that the state’s budget is not in great shape. He added that it doesn’t help that the governor hasn’t been spending a lot of time in Wisconsin to make the case that the economy is doing better.

“It’s not too surprising that (Gov. Scott Walker) is taking a beating in some of these public opinion polls, and that is reflected in how people feel about the economy,” Quinn said.