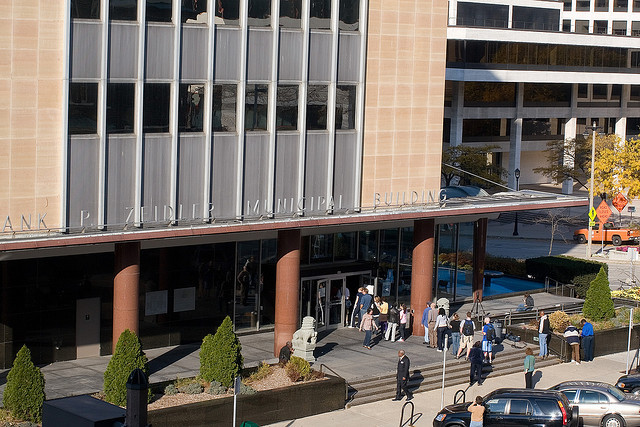 Milwaukee's Municipal Building, which is only the location in the city where residents can vote early. Photo: Derek Dysart (CC-BY-NC-SA).

As early voting begins in Wisconsin, some groups are concerned by the fewer early voting hours that will be available for this year's election.

Republican lawmakers and Gov. Scott Walker set uniform early voting hours, eliminated weekend hours and said communities could have only one early voting site in a bill signed into law this spring.

Mike Wilder of the African-American Roundtable in Milwaukee said he's concerned about the loss of weekend voting and the one-site limit.

The League of Women Voters said it will be working with others to monitor any problems with early voting. Meanwhile, the one Milwaukee site open for early voting — the city's Municipal Building — seemed quite busy on Monday morning. Milwaukee resident Albert Brown said this was the first time he's voted early.

“I just felt that I just can’t wait,” he said “I came within the first hour and a half.”

Brown said he voted for a change in the governor's office. Another early voter, Daniel Klosowski, said he likes the way things are going in the state. He said he’s voted early before, but wishes there was even less of it.

“I wish we only had one-day voting or absentee, and that’s it,” said Klosowski. “I don’t see the reason for all this two weeks, but that’s the way it is.”

Early voting lasts through Oct. 31, with no weekend hours.