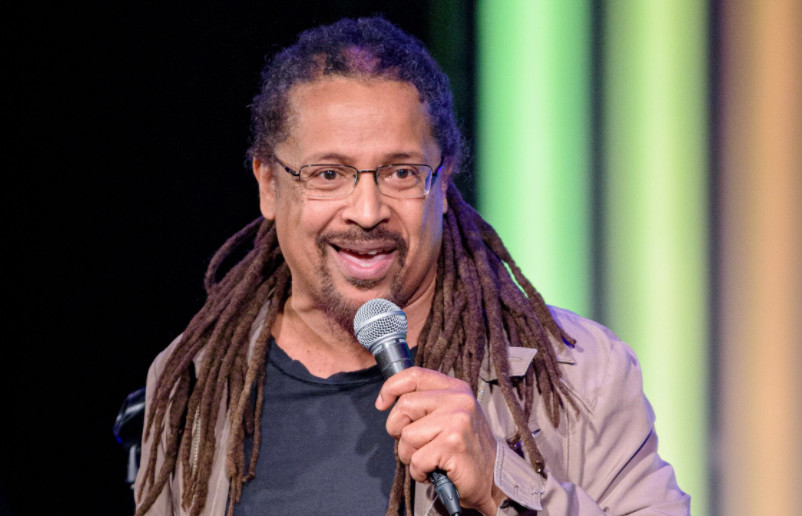 Comedian, writer and actor Dwayne Kennedy is no stranger to the stand-up stage. The Emmy-winning Chicago native has been performing and writing for over 30 years. Which is why it's a little curious that he has chosen now to release his debut comedy album, "Who The Hell Is Dwayne Kennedy?"

In all seriousness, Kennedy — who records most of his material — hints at a penchant for perfectionism as the real reason behind the timing of his long-awaited release.

"I had tried to do one a number of years ago and I just didn't like it," he said. "You listen to it and it's like, 'Oh, man, this isn't what I wanted. This isn't how I thought it would be or it's not good enough.' I'm compulsive in that way."

The album is co-produced by fellow comedians W. Kamau Bell and Hari Kondabolu. Kennedy is probably best known for being a writer and consultant on Bell's two critically acclaimed TV shows, "Totally Biased with W. Kamau Bell" from FX, and CNN's "United Shades of America," winning an Emmy award for the latter.

Kennedy said working on those two shows helped influence his comedy and sharpened his already piercing cultural commentary by, "making me more conscious and cognizant of what's going on in the world and all the various types of folks in the world."

"It just put me in contact with so many different types of people. That informs you, however much consciously or even subconsciously," he said.

Kennedy said his favorite segment he did for "Totally Biased" was joining a Civil War reenactment as a Confederate soldier. That same level of absurdist comedic perspective on society is rampant throughout the album.

This shows up in hilarious bits like "A Great Day for Football," "The Dog Don't Bite Unless…" and "Young Black Psychopath Trying to Make It," which offers a thought as to why most serial killers are predominately white.

"The first observation was that it seemed like white folks pretty much have the psychotic murderer, mass murderer or serial killer thing kind of locked down," explained Kennedy. "But also the fact that if white folks had access to most of the wealth, that maybe is not just a racial thing, maybe it's an economic thing."

On one of the early highlights of the album, "People of Color," Kennedy posits why the Black community scorns the term "colored people" but seems fine with a semantic adjustment to "people of color."

As with nearly every element of Kennedy's comedy, the conceptual comedic surface gives way to a more thought-provoking core.

"I think it's more a matter of taking control of something, because we were assigned that category, 'colored people'," Kennedy said. "It's like you don't call me whatever you want to call me. I'll call me whatever I want to call me. So I guess the inversion of it is like your first identifying people as people. So I think semantics is crucial in that sense because first it's people. So even if you shorten it, it would just be, 'Oh, look at these people.'"

Kennedy isn't afraid to take risks either, perhaps personified in a track on the album called, "Shooting Season in Chicago" which tackles gun violence there. He is also acutely aware of the realm and time he is operating in and emphasizes knowing your audience.

"As time has gone by, people have become, I think, more sensitized to that. You can still do it. It just depends on where," he said. "So there's certain places I could do that bit and it would go gangbusters, and there was some places you could do it and people would not have it. They wouldn't be feeling it. Just not by nature of you joking about gun violence."

Even though Kennedy states, "nothing is off limits and nothing's taboo as long as it ends in funny" he isn't dismissive of the audience's reactions.

"Sometimes you hear comedians say, 'Hey, I'm a comedian. You don't like it. That's on you.' I guess to some degree that's true, but it doesn't make you inculpable for the things that you say," he said.

Kennedy, who also had a role in Ahamefule J. Oluo's "Thin Skin" (Oluo is the executive producer on the album), said in addition to more comedy, he'd like to tackle writing a book or film in the future.

"I keep saying that. Yeah, but that takes discipline and consistency. So I'm working on that," he said.

"Who The Hell is Dwayne Kennedy?" is out now from Oak Head records.