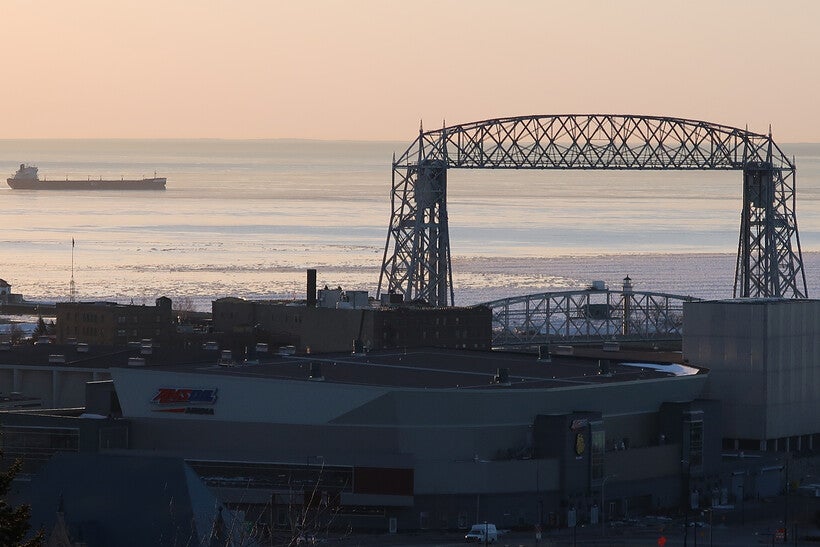 A vessel sits just beyond the Duluth Aerial Lift Bridge and harbor in spring of 2017. Danielle Kaeding/WPR

Authorities in Duluth announced Sunday that a 36-year-old man faces charges of first-degree arson in the fire that destroyed a synagogue last week, and that there is no indication that the fire was a hate crime.

The nearly 120-year-old Adas Israel Congregation synagogue in downtown Duluth was destroyed in an early morning fire on Monday, Sept. 9.

Duluth Police Chief Mike Tusken said at a news conference that surveillance video and tips from residents directed investigators to the suspect, who was arrested Friday.

The fire started in a shed adjacent to the synagogue. Tusken and Fire Chief Shawn Krizaj said there was no indication that any accelerants were used to fuel the fire, but they did not provide information on how or why the fire was started.

"Based on all the information that I have reviewed... there is at this moment in time no reason to believe this is a bias or hate crime," Tusken said at a City Hall news conference Sunday. "That may change... but at this point in time that is the determination I have."

Tusken said the suspect was identified as a person of interest as early as Monday afternoon and was known to police from previous arrests. Tusken said there appeared to be no connection between the suspect and the synagogue.

Formal charges are expected by midweek.

Tusken also said, addressing the congregation, that "your loss is our loss, your pain is our pain" -- and that the community stands together.

Krizaj said one firefighter who was injured by falling debris while battling the fire continues to recover from concussion symptoms.