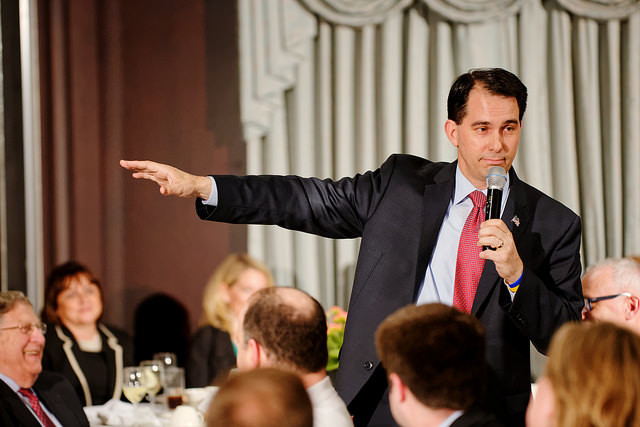 Litjens and Lautenschlager Disagree On Impact Of Walker's Travel On State
By Kayla Blado
Share:

Gov. Scott Walker has been hitting the road frequently as he ramps up his (still unofficial) campaign for the Republican presidential nomination. But according to results from the spring 2015 Wisconsin Survey, 43 percent of respondents see Gov. Scott Walker’s interstate and international travel as detrimental to the state of Wisconsin. Only 18 percent said it was beneficial.

Because Gov. Walker’s travel is currently paid by Wisconsin’s taxpayers, this week Democrats in the state Legislature’s budget committee pushed a proposal for transparency on Gov. Walker’s travel expenses. Some taxpayers are upset at the cost of the governor’s travel, including the $138,000 taxpayer-funded trip to Great Britain in February. In response to increased public pressure, Our American Revival, Walker’s fundraising organization said that they will reimburse the state for all travel costs, except the salaries of his security detail.

Peg Lautenschlager a former Democratic attorney general said that this is a difficult area to regulate, but contended there should be more oversight in the governor’s travel.

“The process should be incredibly transparent, especially when public tax dollars are at stake.  No matter whom the person is, no matter which political party,” said Lautenschlager. “I guess I’m one of those people who think that transparency is key. As a result of that, we should be able to get all of those numbers and do that in real time.”

Walkers increased absense in the state also coincides with the state Legislature's work to pass the governor's budget proposal. But Michelle Litjens, a former Republican state Representative from Oshkosh, said that the timing of the governor’s travel shouldn’t worry taxpayers, because it allows the legislature to have more autonomy.

“If the governor wanted more of his budget approved, he would be here doing more of a sales pitch on it. Instead the legislature is going to be able to make the changes that they feel they need to make and they’re going to be talking to the public about that budget,” said Litjens.

“I think if that was his number one priority right now, I think that he would need to be here to do that,” she added.

Lautenschlager agreed that the legislature is doing more work on the budget, but disagreed as to whether it was a good idea for Gov. Walker to be traveling during this time.

“I guess part of me says, ‘great, the governor is out of the state and the legislature is actually being forced to listen to people on at least a few of these issues and do some walking back.’ My bigger concern is simply that the governor walked away from his job in order to craft this broader national message that appeals to a Republican primary electorate,” said Lautenschlager.

Litjens says that Walker hasn’t been neglecting his duties as governor, but isn’t leading on the budget.

“He is here on a regular basis. Weekly, (the legislature and gevernor) meet in Madison and the governor still continues to travel the state while spending some time out of the state as well,” said Litjens. “He is spending time here, he’s discussing his issues with people, but he is not being the leader on the budget.”