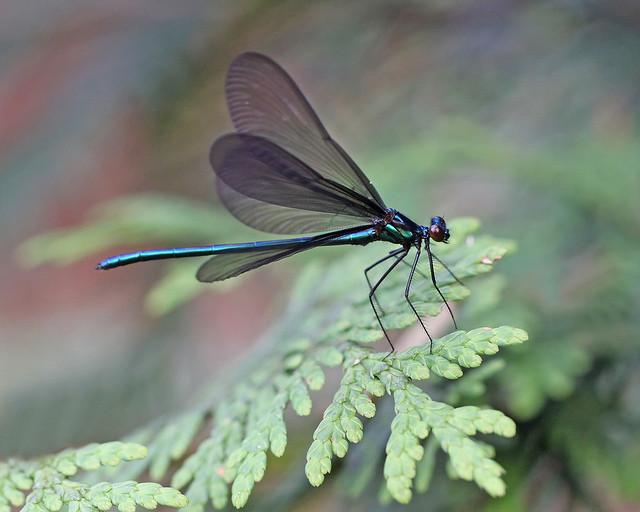 Dragonfly Or Damselfly? Here's How To Tell The Difference

Those dragonflies you've been seeing buzz around lakes and ponds this summer might not actually have been dragonflies at all.

Believe it or not, they could very well have been members of a whole other subgroup of insects that also have transparent wings, large eyes and slender abdomens: damselflies.

Damselflies, like dragonflies, are members of an order of carnivorous insects called odonates. In Wisconsin alone, there are about 50 different species of damselflies that come in a wide range of vibrant colors, from orange to blue to emerald green. Jewelwings, for example, are arguably one of the most stunning insects found in the state: Their black wings are accompanied by an emerald green abdomen.

It may seem tricky at first to tell dragonflies and damselflies apart, given their physical similarities. According to P.J. Liesch, the manager of the University of Wisconsin-Madison Insect Diagnostic Lab, it helps to look at two specific traits: size and wing position.

In terms of size, damselflies tend to be the smaller of the two varieties, with slender bodies that are about 1.5 to 2 inches long. Dragonflies, on the other hand, "tend to be larger, and they have a more stout appearance," said Liesch. "They’re just overall thicker."

As for the wings, Liesch recommends looking at them when the insect in question is at rest. Dragonfly wings will sit out to the side in a t-shape, while damselfly wings fold up straight back along their body. Because of that, damselflies "have this very narrow appearance to them," Liesch said.

That said, dragonflies and damselflies really do have a lot in common, even beyond their physical appearance. Both varieties of insect can be seen flying all over the state during their peak season in late August. Both are also most prevalently found near bodies of water, said Liesch.

"It could be a pond, lake, river stream — anything like that. There’s going to be some type of dragonfly or damselfly," he said.

What's more, both dragonflies and damselflies are notoriously entertaining, said Liesch. For instance, the males are often territorial. They may have a certain twig off of a branch or a certain cattail that they like to sit on. When another male approaches, a feud begins.

"If another male comes into their territory, they’ll go after it and chase after it and fend it off and kind of duke it out in midair sometimes," Liesch said.

Liesch said that thanks to those kinds of displays, many people seek out the insects and look at them through binoculars, just like birdwatchers.