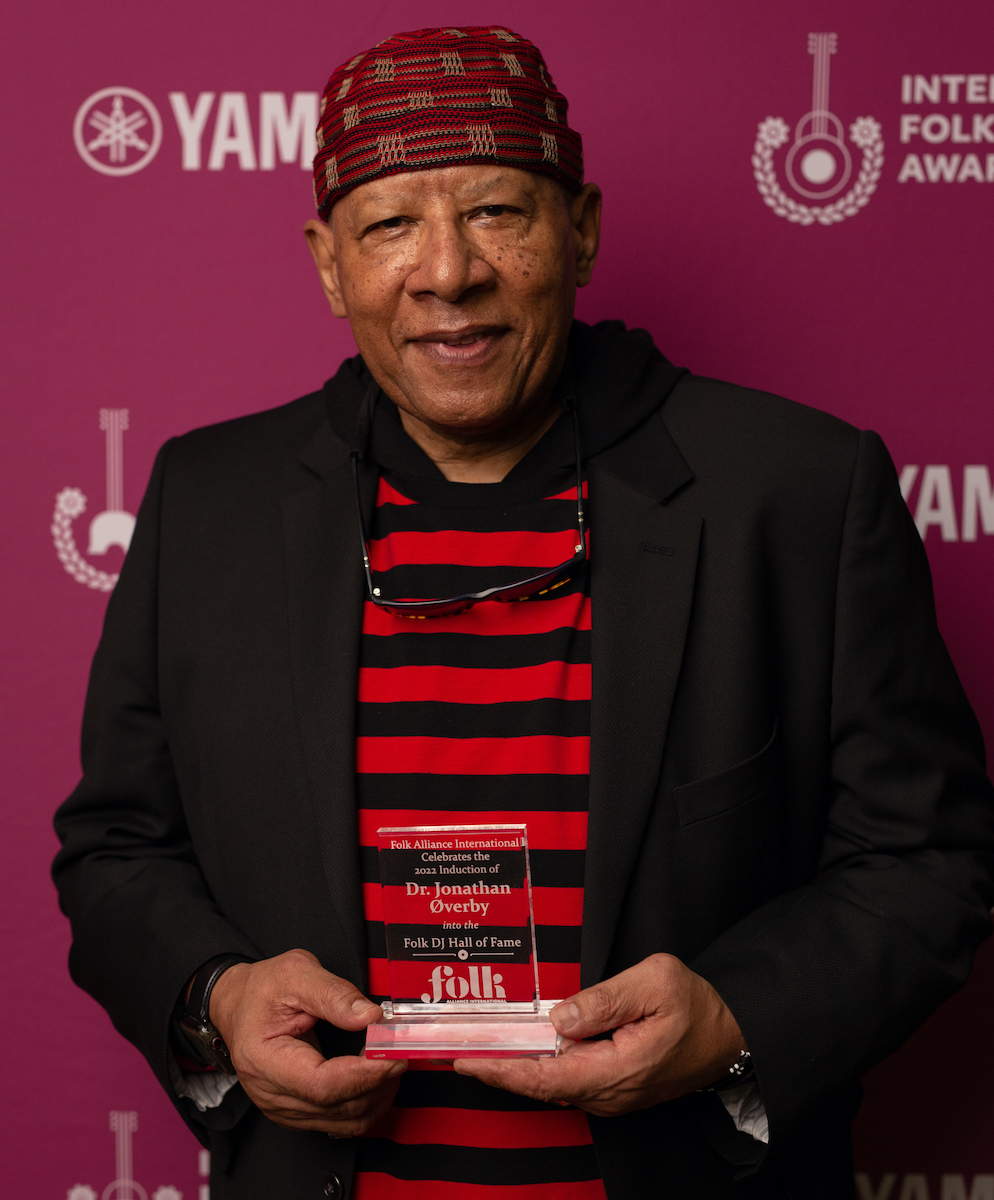 Dr. Jonathan Øverby, host of the popular global music program “The Road to Higher Ground” on Wisconsin Public Radio, has been inducted into Folk Alliance International’s Folk DJ Hall of Fame. Øverby joins a short list of distinguished broadcasters from around the world who are past recipients of this honor, including the BBC’s Bob Harris, the CBC’s Holger Petersen, NPR’s Fiona Ritchie and Radio Nacional de España’s Manolo Fernández. The honor was presented in a ceremony in Kansas City on May 18, 2022.

“I grew up in the inner city of Milwaukee, Wisconsin and there I learned the power of hatred, distrust and fear,” Overby said in his acceptance speech thanking FAI. “But the power of music that I would learn later in life, taught me about music and its power to create love, unity, inclusion and the celebration of people who were different than me. Not just because they were different, but in spite of their difference. I use my radio program to celebrate those people with the hope of creating a better understanding between diverse groups en route to reducing human hatred.”

According to FAI Executive Director Aengus Finnan, the Folk DJ Hall of Fame “recognizes radio hosts who have made an outstanding contribution to the preservation, promotion, and presentation of folk music, and who have demonstrated and inspired leadership in the broadcast field.” Øverby, who has served as host and executive producer of “The Road to Higher Ground” at WPR since 1994, has spent his life performing, teaching, researching and promoting diverse genres of music.

“‘The Road to Higher Ground’ isn’t just a celebration of music from people and cultures near and far, it is a celebration of life,” noted Interim WPR Director Tom Luljak. “Whether he’s on air or working in communities throughout Wisconsin, Jonathan brings a passion and joy for his work that people respond to - this is such a well-deserved honor.”

Born and raised in Milwaukee, Øverby attended Rufus King High School where he got his first taste of radio as a play-by-play announcer for school sports. Øverby has formed and conducted numerous music ensembles throughout his career and performed as a concert artist and in groups throughout the U.S., Europe and Japan. Prior to joining WPR, he produced and hosted a weekly gospel music program on Madison’s W.O.R.T. community radio for more than twenty years.

“Dr. Overby’s lifelong commitment to international travel, research and engagement with musicians from around the globe to build connections and understanding through music is an inspiration,” Interim Director of Wisconsin Public Media Heather Reese said. “His program embodies the best of what community and public radio can be — a place for discovery, curiosity and understanding.”

Øverby is also the host and executive producer of the annual State of Wisconsin Tribute and Ceremony Honoring the Reverend Dr. Martin Luther King, Jr., the oldest state celebration in the nation. He was appointed to the State Arts Board by Governor Tommy Thompson and served 12 years.

Øverby was named a distinguished broadcaster at the university in 2013 and honored with the U.W. Colleges and Extension “Wisconsin Idea Award” in 2016 for his "outstanding contributions to service and education to society, and the quality of life in Wisconsin, the nation, and the world." He holds a doctorate in Administrative Leadership in Higher Education from Edgewood College in Madison, WI and frequently leads international group trips for research and experiential education.

You can watch Dr. Øverby's induction and speech on the FAI YouTube Channel here. Fast-forward to 45:20 to see the DJ Hall of Fame portion of the program.

This year WPR was honored with more than 30 state, regional and national awards for our reporting, music hosting, podcasts and online work - find a complete list here. We’re proud of our talented staff and the work they do every day for the people of Wisconsin, work that we couldn’t do without you - our supporters. Thank you for making everything we do possible!