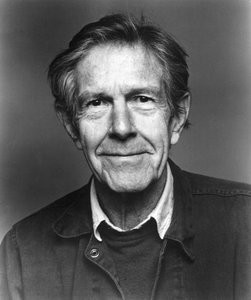 Down & Out in New York

In 1942 avant-garde composer John Cage was not prospering.  He and his wife arrived in New York on the bus from Chicago with twenty-five cents between them.  Cage would find New York rich in culture and poor in paying jobs.

The couple had come at the invitation of sculptor and painter Max Ernst, who welcomed them to stay in the apartment he shared with Peggy Guggenheim.  Guggenheim had even suggested that Cage direct a concert of percussion music to celebrate the opening of her new gallery.  In return, Guggenheim would pay the transportation costs for bringing the necessary instruments to New York.

At first Cage had the time of his life.  “Somebody famous was dropping in every two minutes it seemed,” he said later.  He also succeeded in arranging a percussion concert at the Museum of Modern Art.

Then his luck turned sour.  A meeting with avant-garde composer Edgar Varese ended abruptly when Varese’s wife compared Cage’s music to the work of a cartoonist.

Cage thought dance producer Martha Graham had invited him to work with her company as an accompanist or perhaps even as a composer.  When he met her, he found her cold and remote and completely uninterested in any kind of collaboration whatsoever

Then Peggy Guggenheim found out about the performance that Cage had arranged at the Museum of Modern Art.  She flew into a rage, cancelled the performance at her gallery, and refused to pay for the transportation of the instruments.  She also made it clear that Cage and his wife were welcome at the apartment only temporarily.

Cage wrote to friends and asked for money.  He received about fifty dollars.

One artistic friend was both prosperous and generous.  John Steinbeck treated the composer and his wife to lunch at the celebrated 21 Club on Fifty-Second Street.  John Cage was later horrified to discover that the cost of the lunch had been one hundred dollars.