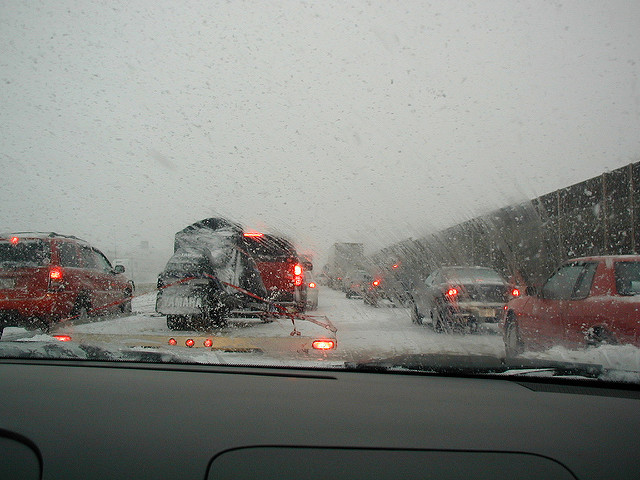 A DOT official wants to remind drivers facing down Wisconsin’s burst of winter weather this week that there are three basic rules of the road that always apply: be aware, be courteous, and communicate with other drivers.

With snow bearing down on David Pabst, director of the Department of Transportation’s bureau of safety, warned drivers against feeling invincible when the roads are slick.

"You feel invincible in a car, especially if you’re in an SUV," he said. "That may get you through the snow and slush pretty well, but it doesn’t increase your ability to stop."

Drivers who don’t need to travel should avoid it, he said, and those who do should use the state's traveler information phone hotline and app 511WI, or other services to find out road conditions in advance. Drivers should still have their winter emergency kits, too, with items like shovels, ice scrapers, and blankets.

Most of all, he said, slow down.

"We all must understand that the speed limit is for ideal conditions," Pabst said. "Legally, we have to slow down."

Wisconsin drivers may also be unaware of a recent law change: It’s now mandatory to run your headlights during inclement weather in which visibility is limited — though Pabst also recommends running headlights at all times, as motorcyclists do, to increase visibility.

Ultimately, he said, drivers should focus not on getting where they need to as quickly as possible, but on being courteous to other drivers, communicating their intentions and respecting the flow of traffic.

For example, in a recently viral dash camera video, a Wisconsin driver on Highway 41 caused a tailgater to crash when the slower vehicle unexpectedly tapped their brakes.

Pabst said the slower driver had a legal obligation to allow traffic to flow, which in this case would have meant moving from the left lane to the right and allowing the tailgater to pass.

"Whether we’re doing the speed limit or not, you need to move over and let faster traffic go by," he said, though he also noted that the tailgater was breaking the law by not giving proper following distance.

"We want traffic to be moving seamlessly and smoothly out there," he said.

To the same end, Pabst said, drivers should always use turn signals. Merging vehicles are responsible for ensuring they can enter highways at the correct speed for a safe transition. Take roundabouts and other uncertain situations slowly, too, and if your lane of traffic has an obstruction, slow down rather than veering suddenly into another lane.

"Do everything you can to make other people aware of what you’re doing and not have to guess," Pabst said.

And, as Wisconsin adds more roundabouts in the interest of reducing the likelihood of dangerous t-bone type crashes, he noted another recent law change: Drivers must let semi trucks take both lanes, or the full width, of a roundabout. That's because bigger vehicles need that space to properly navigate the turn.

Finally, he said, drivers need to be more vigilant about using phones and other distractions on the road. While cellphone calls on the road are still legal in Wisconsin (texting is not), Pabst said commercial truck drivers already can’t do even that.

That’s an example that drivers of cars should take to heart in a year when the state is seeing a spike in vehicle fatalities, he said.

"(Truckers) take driving seriously," Pabst said. "I think that’s one of the biggest problems we have in this country is we as drivers of cars don’t take it as seriously as we need to."