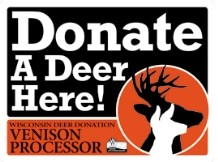 Last year nearly 2,900 deer were donated to the Department of Natural Resources Deer Donation Program. That works out to about 130,000 pounds of venison being distributed to food pantries across the state. It may sound like a lot but in 2006 four times as many deer were turned in for a total of 530,000 pounds. DNR deer donation program Coordinator Brad Koele says there's a trend here, "The number of deer that have been donated has been declining for probably the last six years actually."

Koele says it's hard to say why that is. The elimination of the Earn-a-Buck program, which forced hunters to shoot a doe before shooting a buck could play into it he says, so could the economic recession, "Tag availability is certainly one of those factors but also, me personally, I know people that will take venison if I happen to shoot an extra deer or two."

Regardless of the cause the decline means fewer pounds of free venison for food shelves. Emily Moore is the Executive Director of Feed My People food bank, which delivers food to 100 food shelves in 14 counties, "There has been a decline in recent years. This year and last year was particularly noticeable lower than previous years."

Moore says the venison donated by hunters isn't a staple of their food bank but it is a nice addition in the winter months, "I guess we consider it an extra source of meat and it's great when it's here and when it's not we look to other sources."

The Deer Donation Program has collected around 80,000 deer since its inception in 2000 and has distributed 3.6 million pounds of ground venison. Donations are still being accepted through January 6.