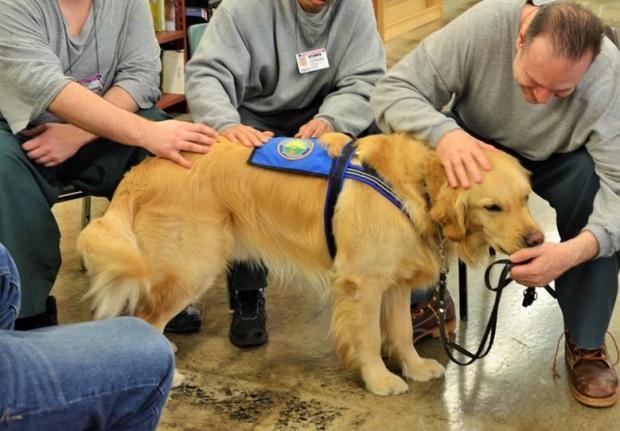 Inmates spend time with a Golden Retriever who they've helped train to serve as a therapy dog for those suffering from post-traumatic stress disorder. Photo courtesy: Sr. Pauline Quinn

After suffering a childhood of abuse and neglect, Sister Pauline Quinn said she leaned on her faith and her German shepherd to restore her self-worth and create a first-of-its-kind dog therapy program for victims of trauma.

By the time she was 12 years old, the abuse and family dysfunction was enough to lead her to run away from home and essentially living on the streets, Quinn recalled.

"I had no out," said Quinn. "Running away from home was a way to escape the trauma, but I was running to nowhere."

She was later institutionalized at a facility where, she said, the abuse continued. The physical and emotional pain literally silenced her.

"It was just really difficult to cope in situations when you're trapped like that," she said. "You just go within yourself and you don't speak because you try to handle the pain internally the best you can."

During those difficult times, she saw how abused and traumatized people in institutions were trapped in their own despair with no help. So she prayed and made a deal.

"When I was in the institution, I told God that if he helped me change my life I’d go out and help his people," Quinn said.

She would keep her end of the bargain after meeting Joni, a German shepherd given to her by friends. Quinn quickly discovered the healing power of dogs and formed her mission.

"Joni had a presence about her that helped me," said Quinn. "Joni was able to help me repair my self-esteem because I felt safe with her — nobody was going to hurt me with this dog by my side."

Now filled with confidence and eager to help others, she set out to start a program to train dogs that would serve abused children and veterans suffering from post-traumatic stress disorder.

Quinn said she studied up on dog training by watching professional trainers and reading books from the library. In 1981, Quinn created the Pathways To Courage Prison Dog Program at a correctional center for women in Washington state, where prisoners trained unwanted dogs to become therapy dogs, who in turn helped veterans and victims of trauma.

"The dogs give the person a feeling of security. It gives them a friend to go into a public place with," Quinn said.

Quinn later took her vows as a Dominican sister and split time between Europe and the United States. She continued spreading her dog training program to help inmates, refugees and children who experienced a childhood like hers.

Her program, or some version of it, is being operated all around the world today, including at two sites in Wisconsin.

"I did this all on a vision and determination and to keep a promise that I made to God," Quinn said.