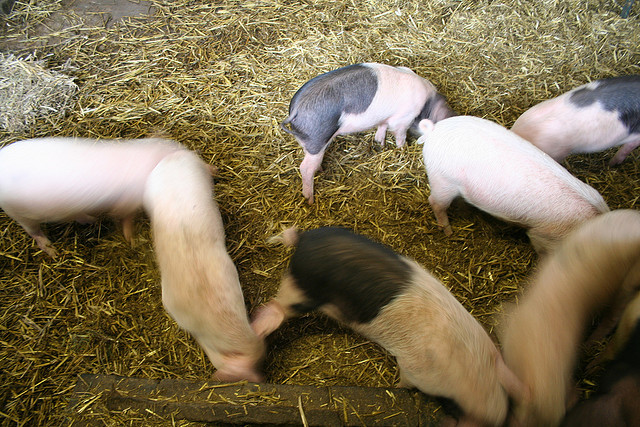 Doctors Concerned By Levels Of Antibiotics Fed To Farm Animals

Research Shows Overuse Of Antibiotics In Meat Could Lead Medicine To Be Less Effective In Humans
By Shamane Mills
Share:

A poll by Consumer Reports finds doctors are concerned about the meat industry's use of antibiotics, saying overuse makes these medicines less effective when humans get sick.

Across the U.S., groups concerned about overuse of antibiotics held press conferences following release of an online survey of 500 family practice physicians. The poll found one-third of doctors had patients with hard-to-treat bacterial infections and a majority were concerned about antibiotics fed to farm animals.

In Madison, the Wisconsin Public Interest Research Group held a news conference where retired University of Wisconsin Health physician Laurel Mark spoke. She said more doctors are becoming aware of how misuse and overuse of antibiotics can make the drugs ineffective.

“We cannot solve this problem merely by avoiding the use of antibiotics in people, since 80 percent of the antibiotics used in the U.S. are given to farm animals, and not even to animals that are sick or infected,” said Mark.

The U.S. Food and Drug Administration has issued voluntary guidelines to regulate antibiotic use by livestock producers. Kyle Richmond and other Dane County supervisors, however, want stronger measures. The county board passed a resolution calling on Congress to pass a proposed Preservation of Antibiotics for Medical Treatment Act. The Dane County resolution also calls on state lawmakers to restrict antibiotics in animals that aren't sick.

“I'm hoping people who regulate meat in state government will take a look at this and consider reducing the use of antibiotics in livestock,” said Richmond.