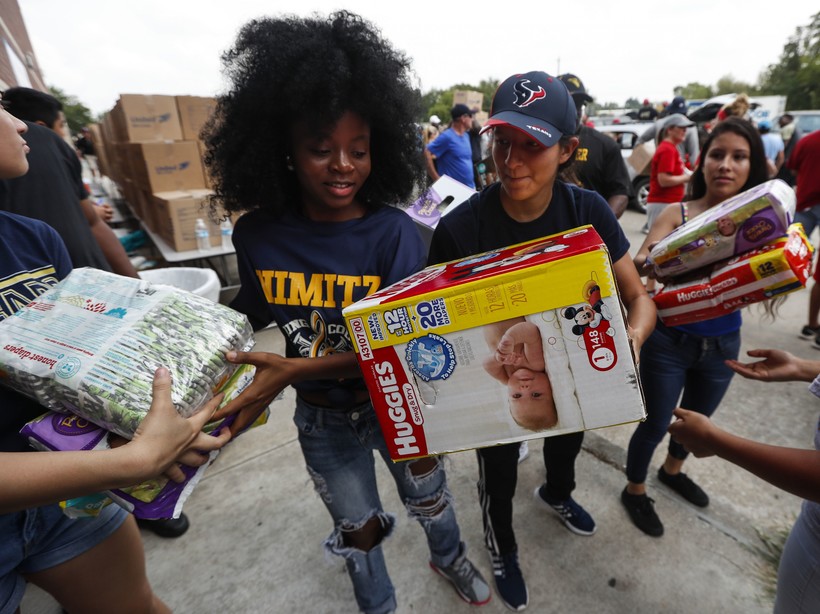 Student volunteers Nahimana Pascaziya, left, and others passes along diapers while helping to distribute relief supplies to people impacted by Hurricane Harvey on Sunday, Sept. 3, 2017, in Houston. Brett Coomer/Houston Chronicle via AP

Do Your Research Before Donating To Disaster Relief Initiatives

As thousands of people grapple with the damage of Hurricane Harvey and thousands more prepare for the damage Hurricane Irma may leave behind, people want to donate money, clothes or food to those impacted by the severe weather.

But it’s not just people living in disaster areas that have to worry about scammers; we’re all potential targets, says Sandy Chalmers, assistant deputy secretary of the Wisconsin Department of Agriculture, Trade and Consumer Protection.

Scam charities gathered hundreds of thousands of dollars after Hurricane Sandy in 2012, according to NPR. Lots of money flows into areas hit by natural disasters and scammers want some of it for themselves, Chalmers said, and the best way to avoid getting scammed is to be skeptical.

DATCP recommends people research charities before making a donation and to be leery of high-pressure, emotionally charged pitches and requests to wire money. In addition, watch for donation requests from groups with "copy-cat" names, names that are very similar to established, trusted charities.

"Go to the website of a reputable charity that has been around for years with an established track record," advised Chalmers.

Also, under Wisconsin state law, most charitable organizations need to register with the State of Wisconsin Department of Financial Institutions if they solicit in Wisconsin or have contributions solicited in Wisconsin on their behalf.

Other DATCP warnings include:

Even legitimate charities may not deliver what’s promised.

"Some of these pop-up charities are legitimate but are unlikely to have the infrastructure in place to get supplies or cash to where it needs to go," Chalmers said.

Other disaster-based scams to watch out for include:

"This kind of fraud is so prevalent right now, just don’t be lured into reacting or responding to a high pressure pitch or a posting on social media," Chalmers warned.