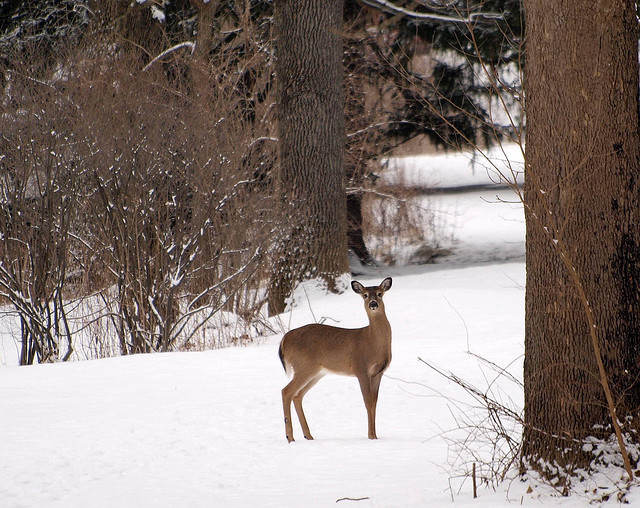 Deep snow and severe cold has been unkind to deer populations this winter. Photo: Stuart (CC-BY-NC)

Deep snow and severe cold has some people concerned that the state’s deer herd will starve, and while Minnesota has begun an emergency deer feeding program, Wisconsin won’t follow suit.

Earlier this month Minnesota announced it would restart an emergency deer feeding program due to the harsh winter. The Wisconsin Department of Natural Resources (DNR) says it will not feed deer this year.

DNR big game ecologist Kevin Wallenfang said under current law, the agency doesn’t have authority to start such a program unless the state Legislature directs them to.

“There had been some rumblings a few weeks back from over at the Capitol that there was a possibility that some legislators were going to request a rule change,” said Wallenfang.

However, Wallenfang said that they were never told to change their rule.

While the state won't feed deer, citizens in Wisconsin can do so under strict regulation. University of Wisconsin-Madison wildlife biologist Tim Van Deelen, however, said feeding deer can actually be fatal for the animals, because they can’t digest corn or hay in winter and food piles can spread disease.

“It’s completely intuitive to think you’re doing a good thing when you’re putting the food out on the landscape to try and help some of the deer survive,” said Van Deelen. “It’s just that, as in so many of the things that we deal with when humans and wildlife interact, it’s the unintended consequences that come back and bite you.”

The DNR says there have already been reports of dead deer being found with stomachs full of corn.