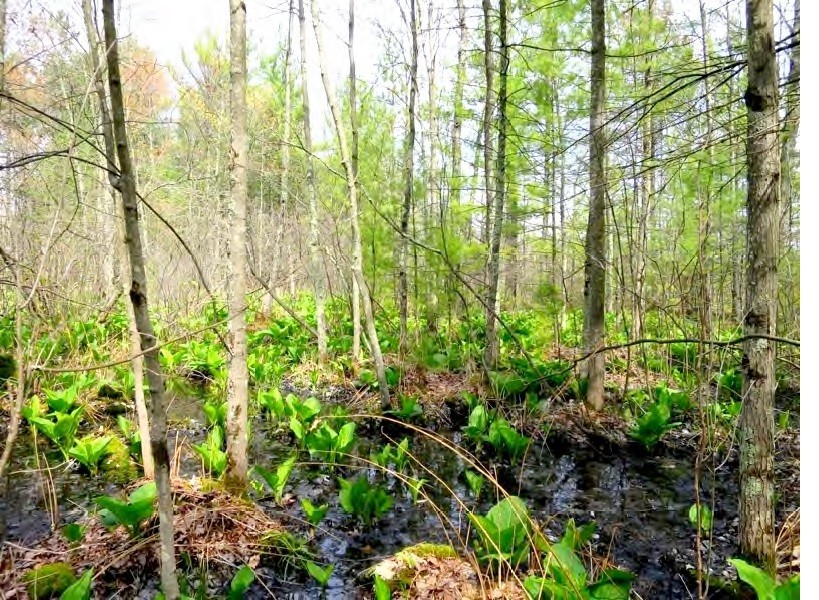 Meteor Timber plans to fill 16 acres of high quality wetlands, including 13 acres of rare, white pine-red maple swamp in order to build a frac sand drying, storage and rail loading terminal. The company has proposed converting cranberry beds on the property into 33 acres of hardwood swamp and preserving 296 acres of wetlands on other property it owns nearby.

Emails Show Frustration Over Lack Of Information From Company And Tight Deadlines Set By DNR Administration
By Rich Kremer
Share:

A two-year battle to build a frac sand plant on 16 acres of rare wetlands in Monroe County is coming to a head this spring. A judge will decide if the Wisconsin Department of Natural Resources followed the law when it approved the project last year.

Staff at the DNR say they felt pressured by department administration to rush the approval of a controversial permit to fill 16 acres of high-quality wetlands in western Wisconsin that’s now being challenged in court, according to emails obtained by Wisconsin Public Radio through an open records request and interviews with former staffers.

In 2014, Atlanta-based Meteor Timber bought 50,000 acres of Wisconsin forestland and became the largest private landowner in the state. After discovering 137 million tons of frac sand on property it purchased in Jackson County, the company proposed building a mine. It also proposed building a sand-processing plant and rail loading facility on land that currently hosts a cranberry farm 14 miles away in the Town of Grant in Monroe County.

The plant would ship up to 1.5 million tons of finished sand each year to busy oilfields in the Permian Basin of Texas.

Emails obtained from DNR staff as part of the open records request show staff felt rushed to issue the permit even though they didn’t have basic information about the site of Meteor Timber's planned mitigation project.

Pat Trochlell retired in January as a wetland ecologist after 37 years with the agency.

In an interview with WPR she said staff were told to approve the company's permit no matter what and were even told what questions they could ask and what data they could collect. She said staff didn't have information on soil or water conditions from the site where the company planned to replace the rare wetlands.

"For a mitigation project to be approved you would typically have a good idea of the mitigation site, hydrology and soils, and that was data we just did not even have up to the point the permit was issued," said Trochlell.

The DNR approved Meteor Timber’s application to fill the 16 acres of wetlands on May 19. That day former DNR Wetland and Waterways Section Chief Martye Griffin sent an email congratulating his team for writing permits for the wetland fill and a creek realignment just two days after getting new information from the company.

"For these staff to set aside the questions, uncertainty, and confusion stemming from the new information and cope with the stress and expectation of delivering high performance resulting in not one but two heavily complicated permits written in 48 hours is an achievement that I don't think can be equaled and that achievement should be properly recognized as such," wrote Griffin.

Under state law, a company wishing to fill a wetland must first avoid and then minimize environmental impacts caused by their project. To do this a company must consider alternative sites to build on and then pledge to restore wetlands elsewhere to replace what is destroyed. But Meteor Timber was able to take advantage of a 2011 law change that limited the number of alternative sites it needed to consider by proving its project would create an economic benefit to the local and state economy.

The wetland permit issued by the DNR was unusual, though, because it set conditions requiring the company to submit information normally required before a project is approved. This included baseline data about soil and hydrology in the cranberry beds Meteor planned to convert to hardwood swamp.

Meteor Timber has pledged to naturalize Rudd Creek as part of its mitigation plan. Photo courtesy of Meteor Timber

It was a new approach DNR Wetland and Waterways Northern Region Manager Robert Rosenberger called "unprecedented by any nature" in an email to staff.

Another thing that set Meteor Timber's wetland permit apart from others was an admission by the DNR that it was uncertain whether the company's plan to replace the rare wetlands would be successful.

After the permit was issued in May, the requests for additional information on Meteor Timber’s plans to replace the 16 acres it wanted to fill sparked an intensive back and forth between the department and company.

Meteor Timber submitted multiple mitigation proposals, including a 980-page document received by DNR staff Friday, June 22. An email from DNR Watershed Bureau Director Pam Biersach to staff warned DNR administration expected them to have it reviewed by the next business day.

"I’ve made it clear to Admin that there is no way we can have the new submittal reviewed by Monday, and that it will be necessary for Meteor to go over what they changed in the plan in order to address the permit conditions. That said, there’s an expectation that we will drop everything to begin diving in to our review as soon as the submittal reaches us, attend Monday’s meeting to listen and ask any clarifying questions based on what we are able to review before Monday, and then finish our review ASAP after Monday’s meeting," wrote Biersach.

Trochlell, the former DNR ecologist, told WPR that meeting was unusual, too. She said normally mitigation proposals are discussed with wetland consultants hired by an applicant. But in this case, Trochlell said, the Monday meeting and others like it were packed with people with little expertise in wetland ecology.

She said these gatherings were called "unity" meetings, and staff felt pressure to reach agreements with company officials on the spot.

Meteor Timber attorney John Behling was also in contact with high ranking DNR officials. Behling, who is also president of the University of Wisconsin System Board of Regents, reached out to former DNR Deputy Secretary Kurt Thiede after being frustrated by lower level staff. Behling told WPR it was important to engage the agency at all levels during a permitting process in which he submitted more than 5,000 pages of information.

"It’s a comprehensive proposal," Behling said. "Everyone from the DNR has been welcome, and consequently we talked to all the stakeholders that deal with wetlands in terms of the importance of this project and the benefits it brings to the state."

Even before the DNR issued its original permit in May 2017, environmental law firms Clean Wisconsin and Environmental Advocates warned the agency it would contest the approval of Meteor Timber's project on behalf of members of the Ho-Chunk Nation in what is called a contested case hearing. That’s where a state administrative law judge determines if the DNR acted appropriately when it approved the wetland fill.

Clean Wisconsin Program Director Amber Meyer Smith said the permit had huge red flags, including the requests for information after the approval. Smith says their challenge to Meteor Timber’s permit is an attempt to protect the integrity of the legal process companies go through to fill wetlands.

"The permit was written with an absence of facts to support a decision to allow them to fill it, and that is a big part of why we’re in this case to protect the integrity of that process," Smith said.

Smith and former DNR ecologist Trochlell are also skeptical the plan to replace the 13 acres of red maple-white pine swamp can be done.

"The wetlands in question are considered amongst the highest quality," said Smith. "The experts on both sides indicated that this kind of rare wetland has never been restored in Wisconsin; and even if it could be successfully replicated, it would take up to 300 years."

Behling said he is confident the company’s wetland restoration plan will work. He said that’s because red maple saplings are already growing in the cranberry beds despite the current owner’s best attempts to kill them. Behling added that the farmer warned early on that if the Meteor Timber frac sand plant isn’t approved, he’ll have to clear-cut trees on his property to pay back a $326,000 loan taken out in 2016 to resolve a prior violation for illegally filling wetlands. "Ultimately, it comes down to the question of a farmer who is either going to lose his farm and become homeless," Behling told WPR. "He’s either going to have it clear-cut, which destroys hundreds of acres of wetlands, or he can do this project, which brings 100 jobs and a $75 million taxable facility to the local economy."

The first hearing on the legal challenge to Meteor Timber’s wetland permit was held Feb. 20. At the same time a Meteor Timber lobbyist was working the halls of the state capitol.

The state Assembly approved the amendment, but state Sen. Rob Cowles, R-Green Bay, blocked it from moving to the Senate floor in the Senate Natural Resources Committee, which he chairs.

On March 28, Tusler tried again to get an exemption for Meteor Timber. This time he tacked his amendment to a Senate bill aiming to make it easier for convicted criminals to get jobs. That bill also died in the Senate.

He and Behling argue the company has gone above and beyond with DNR regulators by submitting more than 5,000 pages of supporting documents during the application process. Also, they say the project will represent the biggest wetland mitigation proposal in state history.

"The appeal process can be lengthy and time consuming," said Mathis told WPR. "We’ve been at this for a very long term, as you noted before, and we think that because of the environmental benefits for the local economy and the local support that we have for our project, that it’s worth consideration."

Back in the Jackson County Town of Knapp where Meteor Timber hopes to build its frac sand mine Board Chairman Scott Goetzka is eager to see a resolution. Once mining begins, his town would get annual payments of $100,000. That would double the town's annual budget. Goetzka said board members plan to use the money to upgrade roads from sand to gravel and eventually eliminate town taxes on local residents.

The more than two-year struggle over the Meteor Timber wetland permit could be decided as soon as the end of April, when the state administrative law judge is expected to rule on whether the DNR was right to approve Meteor Timber’s request for what has been reported to be the biggest wetland fill by any frac sand operation in the state.