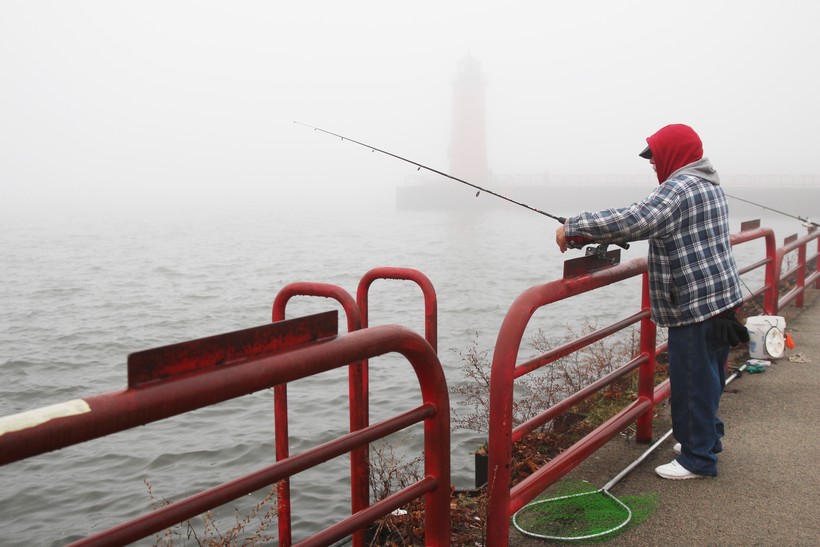 Armindo Guzman adjusts his pole as he fishes along Lake Michigan in Milwaukee, Wednesday, Dec. 23, 2015. The Wisconsin Department of Natural Resources announced that it will launch a brook trout stocking initiative in 2020. Brook trout are good for near-shore anglers, the DNR said. AP Photo/Carrie Antlfinger

The Wisconsin Department of Natural Resources will launch a coaster brook trout stocking initiative in Lake Michigan next year. The agency will also increase stocks of coho, Chinook and steelhead salmon in the lake as part of its 2020-2022 fish stocking plan announced earlier this month.

"We feel that this plan really acknowledges the diverse sources of input and expertise throughout Wisconsin's Lake Michigan shoreline that this world-class resource deserves," Kalish said.

Brook trout are native to Wisconsin. They tend to stay closer to shore, Kalish said, making them great for people who fish off riverbanks, piers and small boats. "We're hoping to really create and sustain and enhance this near-shore fishery that is enjoyed by so many of our anglers," he said.

Kalish said the plans for the next three years aren’t significantly different from past years, though the DNR has decided to discontinue stocking a strain of rainbow trout that’s showed poor return for anglers.

Most of the fish the DNR adds to Lake Michigan are hatched from eggs collected from the lake. The egg survival rate for Chinook and coho salmon is between 5 and 10 percent in the wild, Kalish said, but DNR hatcheries can see egg survival rates of over 90 percent.

"We're just kind of helping natural reproduction along by raising those fish up in our hatcheries and then stocking them back into Lake Michigan," he said.

The plan not only includes stocking fish but also restoring habitats and public outreach programs. Kalish said it’s primarily paid for through the sale of salmon stamps, which anglers are required to purchase if they plan catch and keep salmon in Wisconsin.

When it comes to fish stocks beyond 2022, Kalish said the DNR will use new and traditional data to assess needs. The DNR will aim to work more collaboratively with stakeholders, like charter boat captains who can be on the lake for more than 100 days per year, Kalish said.

"We're also going to enhance some of our survey protocols to get a better picture of the health of the fisheries out there," he said.