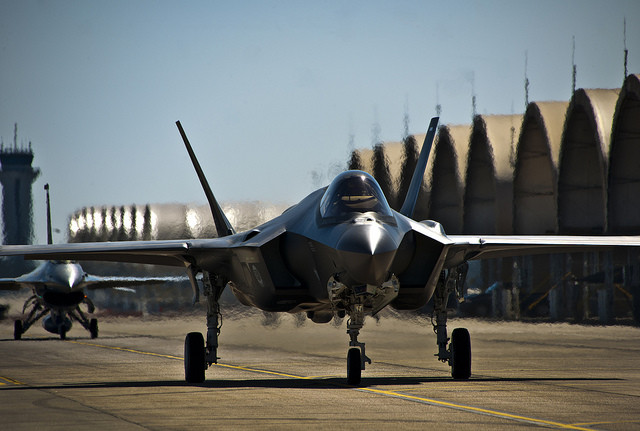 The Wisconsin Department of Natural Resources has raised concerns with the U.S. Air National Guard's draft environmental impact statement for bringing F-35 jets to Madison’s Truax Field, including the military’s plans to address chemical contamination at the site and possible noise-related disturbances to wildlife.

In a letter submitted Wednesday to the National Guard, the DNR called for a complete site investigation into perfluoroalkyl and polyfluoroalkyl, commonly called PFAS, contamination at Truax.

PFAS chemicals don't break down easily in the environment and research has linked them to cancer and adverse health effects, including thyroid disease and decreased female fertility.

A 2018 investigation by the military indicated a likelihood of PFAS contamination in soil and groundwater at the military base, due in part to the use of firefighting foam in fire department training areas there.

Darsi Foss, director of the environmental management division at the DNR, said the letter submitted during the military’s public comment period on the environmental impact statement addressed concerns about moving potentially contaminated soil during construction projects — a number of which would be needed to prepare the field for F-35s.

According to the DNR, moving contaminated soil could increase runoff into local water supplies. PFAS from Truax has already been found in a nearby creek and a public well that has since been shut down.

She said a complete site investigation is necessary, because construction shouldn’t take place over any piece of land that hasn’t been looked into.

"If they build on something and we don’t know what was under there, but suspect there’s contamination, it could make it more expensive for them or any other responsible parties to finish what we think are their legal obligations out there," she said.

Foss characterized the letter as a "friendly reminder" to the military and said similar actions are regularly taken with private developers.

"I’m sure they’re going to properly manage that stuff, we’re just trying to remind them that if they’re going to pick up soil in areas where we know there’s contamination, they have to manage it properly," she said.

The letter also raised concern with the impact statement’s level of acknowledgement for the potential impacts of noise on nearby wildlife.

According to the DNR, about 550 acres of preserved marshland, known as Cherokee Marsh, would be subjected to increased noise from the jets. The marsh is home to a number of rare and declining species, including the Bald Eagle, Short-eared Owl, Bobolink, American Woodcock and Willow Flycatcher.

Maria Powell, executive director of the Midwest Environmental Justice Organization, which has worked with the community near Truax, said the marsh is a popular place for hikers and families.

"In the end, if you affect animals, it will start to reverberate through the entire ecosystem," Powell said. "We need to be thinking about the whole community here."

Capt. Joe Trovato, spokesperson for the Wisconsin National Guard, said whenever a new building is constructed at Truax Field, a site investigation is conducted to determine soil foundation suitability as well as for the presence or absence of chemical contamination.

"If it is discovered at a particular site, a plan would be developed to remediate the contamination and/or mitigate off site migration," Trovato said.

Trovato added the military "appreciates the Wisconsin DNR’s comments on the draft EIS for the F-35 along with all comments from the community, legislators and other stakeholders on the draft Environmental Impact Statement."