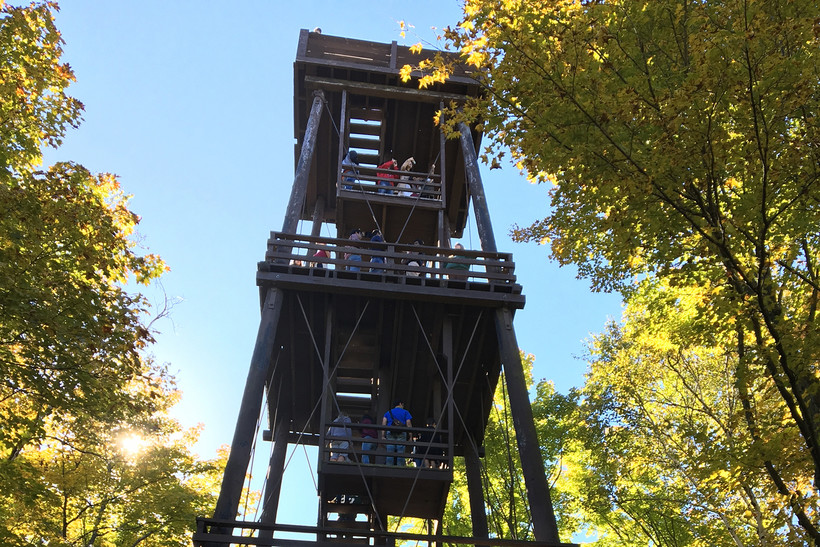 The Potawatomi State Park observation tower, built in 1932, has been closed to the public since 2017 when inspections found rotting structural support beams. The DNR announced on Feb. 11, 2020, it will deconstruct the tower. Erin Stender Brown/DNR

DNR: Potawatomi State Park Observation Tower To Be Torn Down

88-Year-Old Tourist Attraction Has Been Closed Since 2017 Due To Rotting Timbers, But Local Preservation Group Vows To Save It
By Rich Kremer
Share:

The Wisconsin Department of Natural Resources will tear down an 88-year-old, wooden observation tower at Potawatomi State Park in Door County.

The tower has been closed to the public since 2017 due to rotting timbers.

While a local preservation group argues it can be saved, the DNR says it wouldn't comply with the Americans with Disabilities Act (ADA).

The Potawatomi State Park observation tower was built in 1932 by an organization called the Sawyer Commercial Club, according to the DNR. In 2016, the DNR found signs of decay and movement in wooden structural supports. Department engineers, with assistance from the U.S. Forest Service Forest Products Laboratory in Madison, found significant decay in support beams and non-structural parts of the tower.

The observation tower was closed to the public at the finish of the 2017 tourism season. In April 2018, the DNR announced it would be closed permanently and deconstructed.

In an effort to save the tower, the Sturgeon Bay Historical Society hired an Oregon-based company to inspect the structure and present options for repairing it. The group said the results showed the structure could be repaired without being demolished for $250,000.

The DNR hired a third-party consultant to review the reports from the Sturgeon Bay group and the U.S. Forest Service lab. The DNR said the consultant's report outlined three options for the tower: repairing it by taking it down and rebuilding with new wood; repairing the tower in place; or replacing it with a new tower.

The DNR's announcement on Wednesday states that the agency’s legal team determined all three options would leave the tower out of compliance with the ADA.

"As such, the department has made the decision to deconstruct the existing tower and work with partners, including the Sturgeon Bay Historical Society, and the public, to explore a future, accessible observation opportunity at the park according to the park's existing master plan," said the DNR press release.

But Sturgeon Bay Historical Society President Christie Webber said the story doesn't have to end there. She said the observation tower should be designated as a historic structure, which could exempt it from modern building codes and accessibility requirements.

"We're confident we can show this state new information and old information that actually shows it is historical and does meet the criteria of the federal historic preservation codes, which allows for just the repairs to be made and lowers the replacement parts from 90 percent back down to 20 percent of the structure," Webber said.

In a "preservation brief" from 1993, the National Park Service writes, "Historic properties are not exempt from the Americans with Disabilities Act (ADA) requirements. To the greatest extent possible, historic buildings must be as accessible as non-historic buildings." The document does say though, that some historic properties may not be able to meet accessibility requirements.

Eagle Tower at Peninsula State Park in Door County was decommissioned for similar reasons in 2015. Since then a stakeholder group has worked on a new design concept that includes a 1,000 square foot observation deck and an accessible ramp around 850 feet long to comply with ADA standards. That project is budgeted to cost $3.4 million.