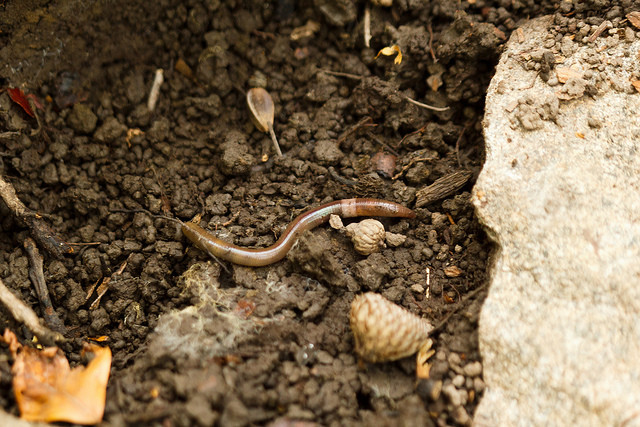 To stop the spread of the invasive, so-called "jumping worm" into Wisconsin's Northwoods, the state Department of Natural Resources is through playing nice. Officials are working to educate the public about how to spot the worms and are offering specific advice about how to kill them.

The worm variety, originally from Southeast Asia, has spread to 14 counties across the state since 2013. Jumping worms are on the DNR's radar because they are very tough on soil and researchers have concerns that they could affect plant growth.

According to Bernadette Williams, a DNR invasive species specialist, the jumping worm is easily distinguishable from other earthworms, such as the night crawler.

"The night crawler is pretty limp and non-active. And the jumping worm is really jumping, it moves like a snake," said Williams.

If gardeners find jumping worms in their soil, Williams said they should first report its location and then take steps to kill them.

"You can report it to us at the DNR. You can become involved through the First Detector Network, which is part of UW-Extension. It’s as easy as taking a picture on your smartphone and sending it in to us (with) the location where you’re finding it," said Williams.

In order to prevent the cocoons from saturating the soil, Williams said the worms should be removed from the soil before killing them.

"If you are finding one of the adults … try and grab and bag as many of them as you can. At least that way, you’re alleviating that pressure of having the cocoons in your soil. If you put them in a plastic bag and then put them in the sun, for 10 minutes or so, you’re going to have a congealed mess of worms … the humane way to put them out. And then just dispose of them in the trash," said Williams.

Although the jumping worm is spreading at a rapid rate, Williams said she feels optimistic about the way the public is responded to the DNR’s call for help.

"It’s a feel-good story because we’ve never found it being sold in a bait store and the public has been involved in reporting it since early last summer. They seem to be very concerned about it, especially when they see the videos of it,"said Williams. "When they see it in person, they handle it, and it jumps out of their hands. They get really excited; like ‘This is a new invasive we should be looking for.'"