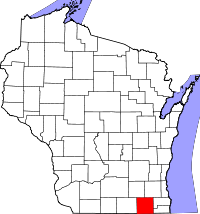 The Department of Natural Resources says it's investigating a recently-killed wolf found in southeast Wisconsin's Walworth County. DNR wolf expert Adrian Wydeven says grey wolves have been killed that far south in Wisconsin before, but this is the first dead wolf found there since the state wolf hunting and trapping season started last month. Wydeven says the newly-discovered wolf may not have been killed by a licensed wolf hunter, so wardens are asking questions.

"With any illegal wildlife killing investigation, conservation wardens will investigate the scene, talk to any witnesses, talk to anyone who knows anything about the animals that had died, and try to find out more by looking over the area and see what they can find in the area," he says.

Wydeven says he doesn't think the wolf in Walworth County was called in on a state registration system set up for the wolf hunt. Other wolves have been legally killed in Adams and Monroe Counties, but most have died in the Northern half of the state.