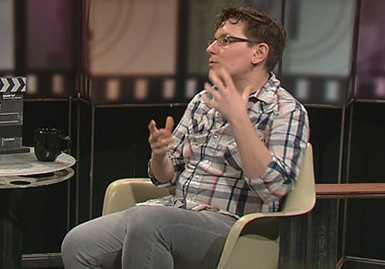 Simon Strikeback of Madison is one of the makers of "Riot Acts", a documentary about transgender and gender-variant musicians. As Strikeback describes, the inspiration for this movie came on a lark:

Simon Strikeback: Yeah, Madsen and I thought that we would make a mockumentary, "Boys on the Road" film ...

Terry Bell: And we should explain, Madsen is your partner in this production.

SS: Yeah, he's my partner in crime. He's the director of the movie. We decided we should go on tour because we love traveling, and our band was getting fun, and [that] we should play with some other musicians, and in the process we should make a mockumentary about two guys on the road.

TB: Kind of a "Spinal Tap" sort of thing.

TB: But this turned out to be a very serious undertaking.

TB: Have you ever made a film before?

SS: I don't even know how to use a camera! Madsen, however, is a filmmaker by trade.

TB: What did you learn about this whole new art form - new to you, anyway?

SS: What I learned is that film ... a lot of people asked us why we're not in the movie, because we're musicians, we're both trans - why weren't we in the movie? Why didn't we put ourselves in? And it's really true that our sort of ideals and values and thoughts and dreams and wishes for the film really come out through both the questions that I asked as an interviewer, and the way that Madsen edited the film.

TB: And it turns out that you maybe accidentally created a network by bringing all these people together that you had to seek out.

SS: Yeah, I think we definitely had a hand in it. And marginalized communities use the internet in really important ways. And a lot of us were able to find each other, through not only social networking, but also music networking - going on tour, playing shows together, things like that.

TB: Do you foresee the day when there's a [transgender] act that strikes a chord with a big enough audience that it's the music first, and the artist's trans identity is just incidental?

SS: One thing that is true is that we always put ourselves in our music. And if somebody's trans experience is important to them - enough to put it into their music - it's going to come out. It may not sound like a "trans" song, but that doesn't mean that it's not a trans song. It must means that a mainstream audience finds enough resonance in it that they don't question what the gender is of the person who wrote it.