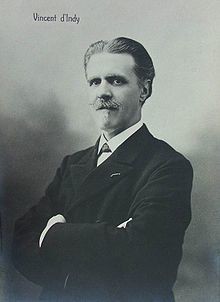 As a way to break the ice, he took with him a manuscript of a work called Redemption by his mentor Cesar Franck.

He found Liszt at work in a secluded cottage near Weimar but as he entered the study, d’Indy startled Liszt, who quickly disappeared and then returned a few minutes later and greeted the young Frenchman warmly.  It turned out that Liszt had just been inducted into a minor order of the Roman Catholic Church and was duty-bound not to receive any guests without being dressed in the long cassock of the order. Liszt seemed unimpressed with Franck’s Redemption.  When he played it on the piano, he skipped over entire sections.

For twelve days d’Indy enjoyed morning coffee and conversation with Liszt, and when Liszt left Weimar, d’Indy went off to Beyreuth looking for Wagner.

Liszt’s daughter Cosima, who was Wagner’s wife, received d’Indy cordially but told him that Wagner was not to be disturbed.  She did let d’Indy observe Wagner from a distance, though, as he paced in his study, nervously tossing sheets of paper into every corner of the room.  The pages were the final part of the full orchestral score of Wagner’s Twilight of the Gods.

D’Indy caught up with Brahms on the steps of a chalet near the village of Tutzing.  The bear-like Brahms was not in a mood to receive visitors and was uninterested in the Franck manuscript.  When d’Indy asked him to play some of his latest piano pieces, Brahms replied that he didn’t play the piano.  He said “auf Wiedersehen “ and showed d’Indy the door.

Although his quest had not been a great social success, d’Indy always regarded his pilgrimage as an event that expanded his cultural horizons immeasurably.