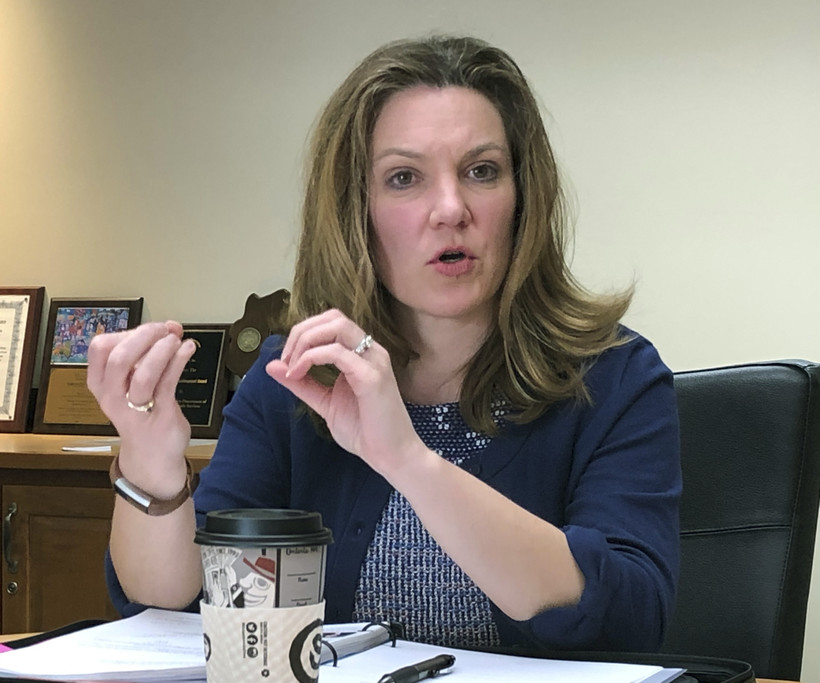 Andrea Palm, Secretary-designee of the Wisconsin Department of Health Services, says Medicaid expansion is the anchor of the agency's plan to address health care needs across the state during a meeting with reporters Tuesday, March 12, 2019, in Madison, Wis. Scott Bauer/AP Photo

Medicaid Expansion Cited As Way To Invest Tens Of Millions Into Health Care Programs Around Wisconsin
By Rich Kremer
Share:

She said her team and Gov. Tony Evers have drafted a budget that aims to spend more on mental health, dental and long-term care by shifting state dollars that would be freed up by accepting the federal Affordable Care Act funds.

"Medicaid expansion is absolutely the anchor of the DHS budget," Palm said. "The $324 million in savings, plus additional federal money that we draw down, are what funds the investments that we make in the rest of the health care system for the good and health and well-being of every Wisconsinite."

.@DHSWI Secretary-designee Palm and I won’t let Wisconsin fall behind. We’re committed to expanding Medicaid so our citizens can get the best healthcare possible. https://t.co/bGDjAQje1b

Former Republican Gov. Scott Walker refused to expand Medicare through the ACA and set income levels for the state Medicaid program, known as BadgerCare, at 100 percent of the federal poverty level. The level is currently $12,140 for individuals and $25,100 for a family of four.

Evers predicted in January that he would prevail in the debate over accepting federal Medicaid expansion dollars. He has since been making the case at speaking events around the state.

Palm said she’s looking forward to working with GOP lawmakers on the plan.

"We are very anxious to have a conversation with the Legislature about those investments, and I think it’s a new day,” said Palm. "There's a new opportunity here to have a fresh conversation and I'm committed and the governor is committed to engaging in that conversation and really highlighting how the proposals, the investments that we are proposing, actually get at the concerns we are hearing from around the state.”

#nevergoingtohappen. We will not expand welfare and increase the cost of private health insurance. Just like so many of the items in the budget, it's a shell game to expand welfare and make more people dependent on the government. https://t.co/B35Tn5lRhi

State Sen. Jeff Smith, D-Eau Claire, toured Dove Healthcare with Palm. He said the healthy communities investments proposed by Evers and Palm "need to happen" and left it to Republican lawmakers to figure out how to fund them if they refuse Medicaid expansion.

"I want to hear what the Republicans have to offer if they don't want to take our tax dollars from the federal government to bring back into Wisconsin how they're going to replace that money to make sure we do the right thing in the state of Wisconsin," Smith said.

"We aren't able to compete with that and that's definitely a big challenge," said Rosemeyer. "We can get people into the program to become a CNA and once they become a CNA, they realize real quickly that they can no longer sustain taking care of their family or paying to continue to be a CNA in long-term care."

Evers' budget also calls for increasing the state's minimum wage incrementally. Rosemeyer said that would help her employees, but could put a financial strain on Dove unless reimbursement rates were increased as well.

"The minimum wage thing is a little bit scary just for the fact that finding a way to support that with facilities that are underfunded would be challenging, but of course, I love what that would do for the people who work for us because what they do is amazing," said Rosemeyer.