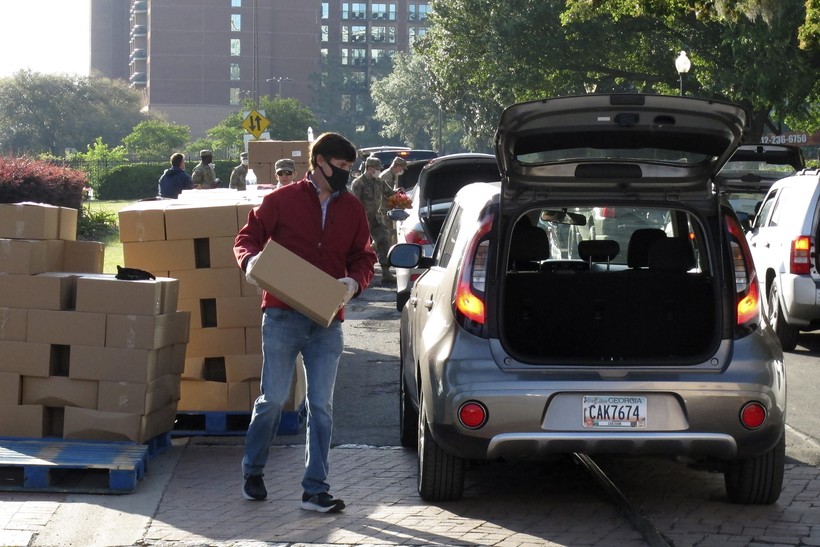 A man wearing a mask loads a box of food into the back of an SUV in Savannah, Ga., as jobless workers lined up in their cars at a drive-thru food bank on Thursday, April 16, 2020. Savannah business leaders and a local charity arranged the drive-thru food bank to help hospitality industry workers left jobless as the coronavirus has virtually shut down Savannah's $3 billion tourism economy. Russ Bynum/AP Photo

DHS reported 922 new cases of the virus on Sunday, bringing the average for the past seven days to 871 daily cases.

The latest figures bring the overall total of positive cases in Wisconsin to 54,924, according to the DHS. A total of 948 people in Wisconsin have died from COVID-19, with one new death reported on Sunday.

According to DHS, 9.6 percent of all test results reported on Sunday were positive for COVID-19, bringing the average percentage of positive tests over the past seven days to 6.8 percent. The seven-day average has been holding steady since July 28.

Wisconsin's daily testing capacity — based on the availability of test supplies and adequate staffing — has grown from 120 available lab tests in early March to 24,156 as of Sunday. The number of actual tests reported on Sunday was 9,643.