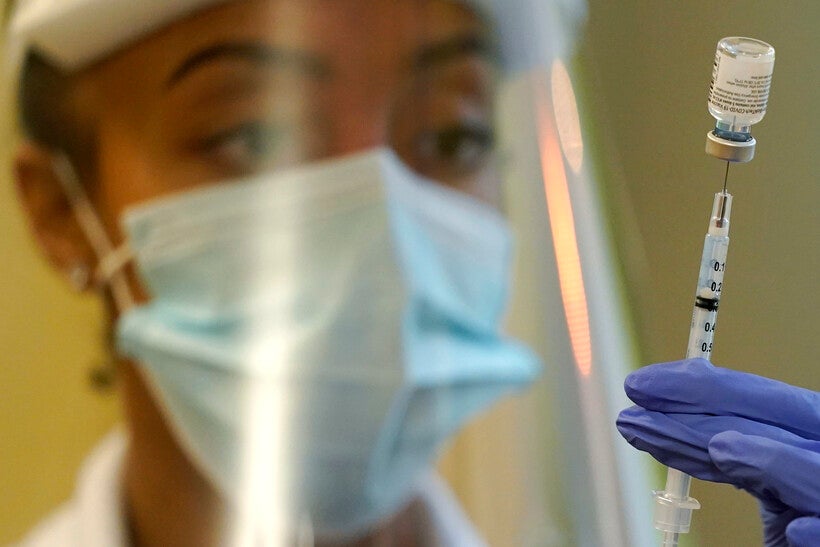 A pharmacist prepares a syringe of the Pfizer vaccine for COVID-19, Friday, Jan. 8, 2021, at Queen Anne Healthcare, a skilled nursing and rehabilitation facility in Seattle where residents and workers were vaccinated Friday. The facility had an outbreak of COVID-19 in May of 2020 that resulted in more than 100 positive cases among staff and residents and the deaths of 20 residents and two staff members. Ted S. Warren/AP Photos

There Are Currently 911 Patients Hospitalized With The Virus, According To WHA
By WPR Staff
Share:

New reports of COVID-19 cases are averaging just above 2,000 cases per day in Wisconsin, based on the latest data published by the state Department of Health Services.

DHS reported 1,606 new cases of the disease Sunday, bringing the average for the past seven days to 2,129 daily cases. The seven-day average of new daily cases has been decreasing since Jan. 9, when that figure was 2,996 cases.

There was one new death from COVID-19 reported Sunday. On Sunday, 5,068 tested negative.

Of the people who got tested for COVID-19 over the past week, 24.9 percent were positive for the disease, according to DHS. That rate has been on the decline since early January.

According to the Wisconsin Hospital Association, there were 911 COVID-19 patients hospitalized as of Saturday. A total of 23,076 people have been hospitalized because of the disease, or 4.4 percent of all positive cases.

The latest figures bring the overall total of positive cases in Wisconsin to 521,794, according to DHS. A total of 5,451 people in Wisconsin have died from COVID-19.

Wisconsin's daily testing capacity — based on the availability of test supplies and adequate staffing — has grown from 120 available lab tests in early March to 59,275 as of Sunday. The number of actual people with new test results reported Sunday was 6,674.