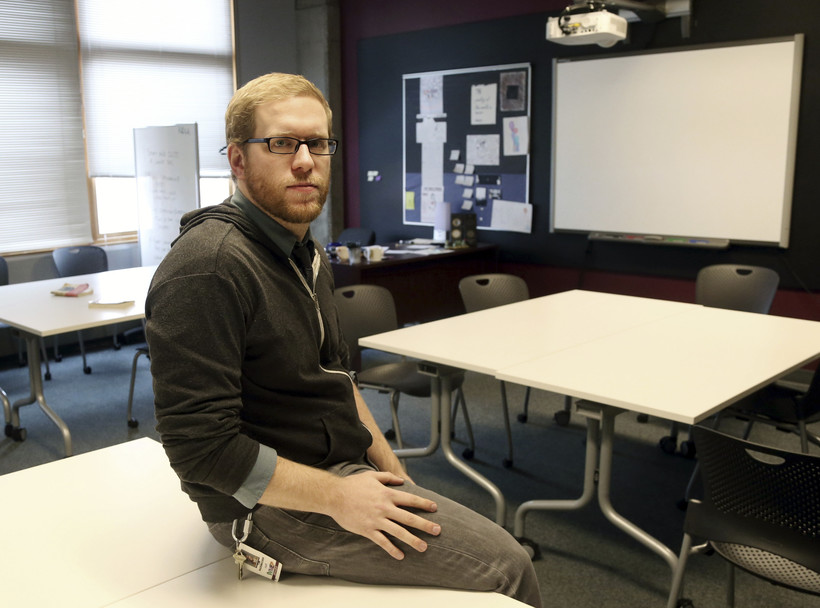 Despite Ups And Downs, 'We Have To Care,' Teacher Says

New Book Tells The 'Real' Side Of Teaching
By Gretchen Brown
Share:

Tom Rademacher wants you to become a teacher. But he won’t lie to you to get you there.

"No matter how good you are, and no matter how wonderful the school you’re in, it’s not gonna be easy to teach," Rademacher said. "That’s one of the messages we never really got in our teacher prep program in our colleges."

Rademacher speaks from experience. He remembers the first time he stood in front of a group of students, realizing how much he didn’t know.

He’s learned a lot since then.

Rademacher was the 2014 Minnesota Teacher of the Year, and is the author of "It Won't Be Easy: An Exceedingly Honest (and Slightly Unprofessional) Love Letter to Teaching."

"It’s a really complex job," he said. "It’s like a thousand puzzles a day that you need to figure out in thirty seconds."

And after 11 years in the field, it still keeps him up at night.

"Saturday night I was up at 3 in the morning for an hour and a half, thinking of one of my seventh grade students," he said.

It’s natural to become personally invested in your students. That’s part of the job, he said, especially when the going gets tough.

Rademacher describes the school system as "unfair" and "outdated," a model that naturally serves some better than others. Instead of feeling personally responsible for the outdated system, he said, teachers should try to level the playing field as much as possible.

Teaching is about more than enforcing dress codes.

Teacher burnout often makes the news. Some experts call it a crisis, with studies describing the field as a "revolving door" over half of teachers leave within their first five years.

Rademacher doesn’t pretend to have all the answers. Nor was teaching an immediate calling. Though his mother was a teacher, he kept the career in the back of his mind.

The Wisconsin native finished college in Minnesota as an English major and applied for two programs: one in writing, and one in teaching.

The writing program fell through.

"I was so glad that happened," he said.

The "unprofessional" piece to the book was also important to Rademacher. There is a camaraderie among teachers that is fully human. They grab beers at happy hour. They get upset. Sometimes, they swear.

That’s not always recognized, he said. He included those stories in his book, because they’re real, and as such, they’re part of what he loves. It’s not a sanitized memoir by any means.

Despite his years on the job, Rademacher continues to experience the real side of teaching. After switching to a new school district this year, Rademacher found out three weeks ago that he was laid off due to budget cuts.

It was a tough experience, but he’s lighthearted about it. He has already jumped into the job search for next school year.

For those teachers also looking for a job, he said it’s important to find the right fit. You’re interviewing the school as much as they are interviewing you, he said.

Once you land somewhere, don’t expect your years of education to mean the job will be a breeze.

"I think the biggest thing that new teachers do wrong is expect to do everything right," he said. "Make those mistakes and learn from them."

It Won't Be Easy: An Exceedingly Honest (and Slightly Unprofessional) Love Letter to Teaching

It Won't Be Easy: An Exceedingly Honest (and Slightly Unprofessional) Love Letter to Teaching