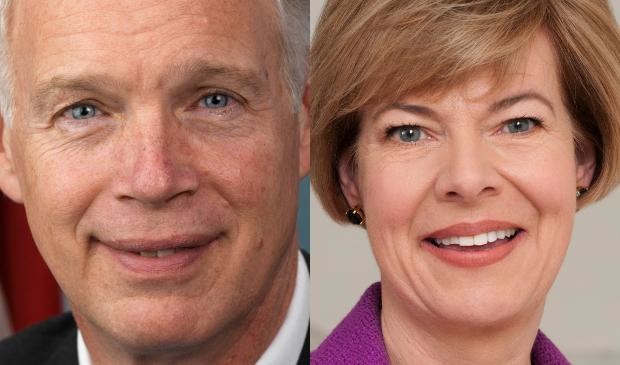 Despite Imperfections, Wisconsin Senators Both Say They Support Budget Deal

Both of Wisconsin’s U.S. senators said that they plan to support a bipartisan deal for a 2014-2015 federal budget although they disagreed over specific provisions within the deal.

The bill to fund government agencies through 2015, approved by the U.S. House of Representatives last week, passed a procedural hurdle to Senate passage on Tuesday morning, and a full vote is expected by the end of Wednesday.

U.S. Sen. Ron Johnson, a member of the Senate Budget Committee and Wisconsin's junior senator, said he will vote for the bill, as long as the Senate doesn’t change it to “make it worse,” he said.

Johnson said he believed in economic growth as the solution to the problems facing the country, which the lack of a federal budget could threaten.

“It only takes a quarter of a percent (increase in) interest rate to increase our interest expenses by $44 billion," he said.

But Johnson said he wasn't happy about the deal’s inclusion of a two-year partial rollback of the sequestration cuts imposed by the 2011 Budget Control Act, calling the cuts the only “budget discipline measure” available in the effort to contain the federal deficit.

“We have to get our fiscal house in order,” he said.

Sen. Tammy Baldwin, also a member of the Senate Budget Committee, did support the reductions in sequestration, and said she hoped the agreement represented the beginning of a bigger phase-out.

“Sequestration is an unwise and very arbitrary policy,” she said. “We’ve seen how they’ve devastated programs that serve those in the greatest need.”

For example, she criticized cuts to Meals-on-Wheels for the disabled and elderly, and those which had reduced the space in federal Head Start programs for low-income children.

“We certainly need to tackle our deficit, but we need to do so in a thoughtful, smart and balanced way,” she said.

She also said she hoped the budget represented progress in the process of negotiating budgets as a whole.

“I hope that it will help break the destructive pattern of drifting from one manufactured crisis to the next that we’ve seen over the past several years,” Baldwin said.

The two senators did also disagree about extending benefits for the long-term unemployed, which wasn't included in the final budget compromise.

Johnson said extending unemployment benefits could discourage the unemployed from seeking work, and would add more spending to the budget.

“Before we consider spending additional money on extending unemployment benefits is … what is the lower priority spending item in the budget that we could substitute that spending for,” Johnson said.

“If we can find lower priority spending items, it’s probably something I can support,” he said.

But Baldwin disagreed that extending unemployment would discourage unemployed workers from finding jobs.

“If we had seen more robust (economic) recovery ... that argument would hold more weight," she said.  “Frankly, the people that I encounter who share their stories about seeking work…the jobs that they have had, many of them aren’t coming back.”