Nobody knew it at the time, but a routine meeting in early 2008 about Wisconsin's state budget offered a hint at the massive recession that was already starting to unfold.

It was almost a decade after Republican Gov. Tommy Thompson first proposed the high-speed rail link between Milwaukee and Madison. Democratic Gov. Jim Doyle was running the state, and Dan Schoof was one of his top aides.

Schoof, who was Doyle's deputy secretary at the Wisconsin Department of Administration at the time, regularly turned to financial firms for advice. One of those firms, Bear Stearns, gave Schoof a series of slides to get ready for the budget meeting.

That was on a Friday. By Monday, Bear Stearns, once a giant of Wall Street, had been bought out for a couple of dollars per share.

"They were one of the early canaries in the coal mines," Schoof said. "They are gone." 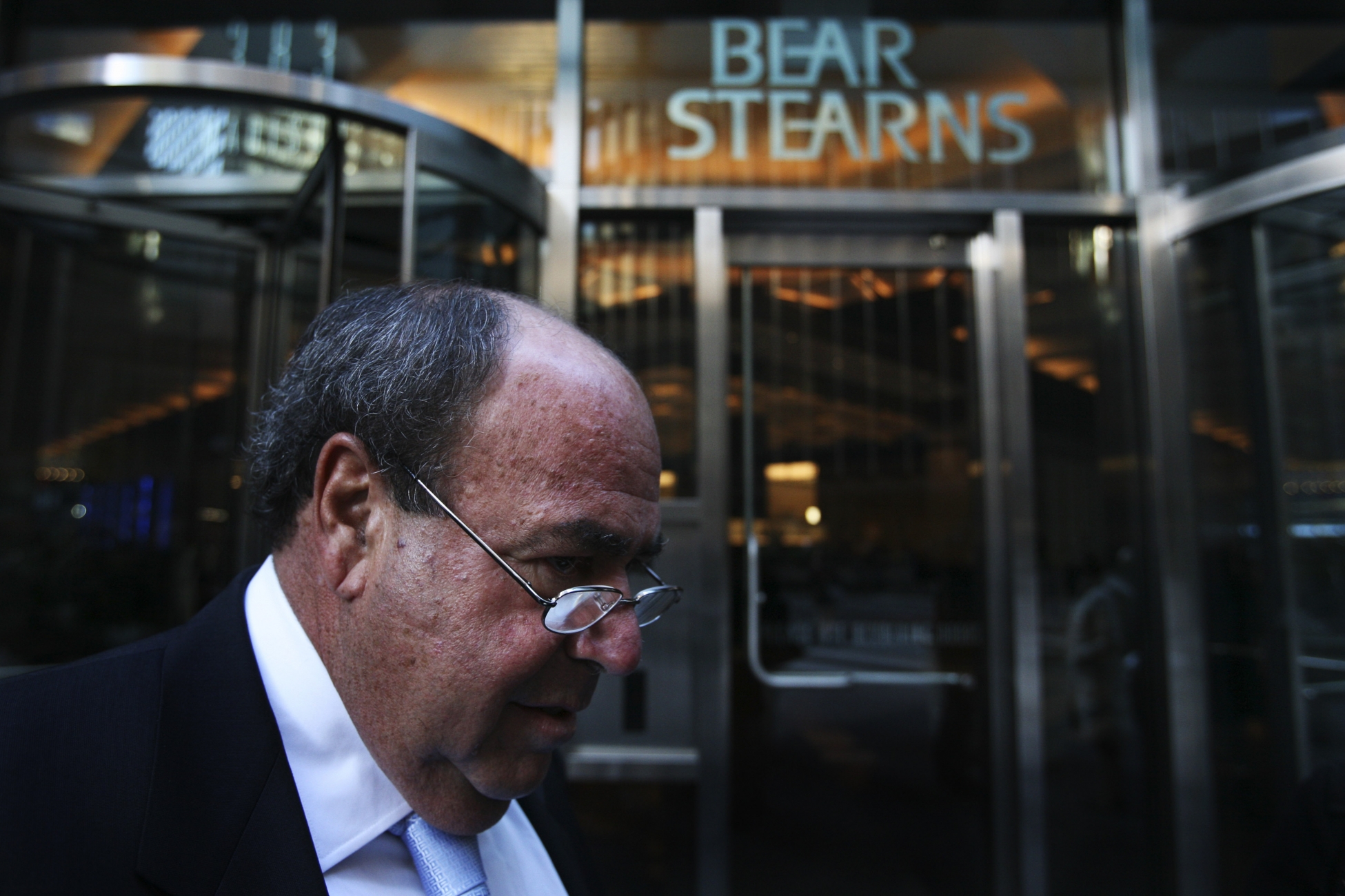 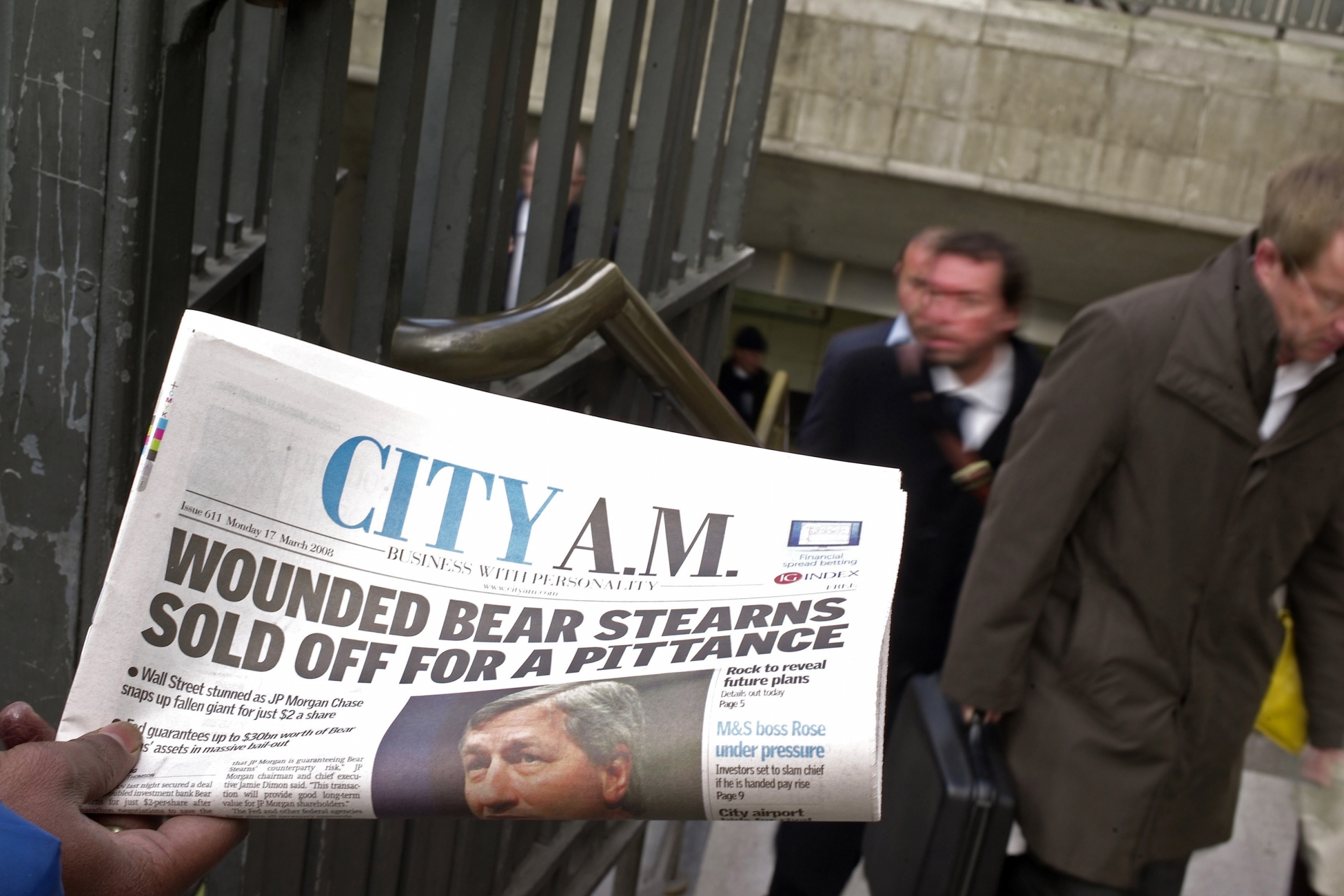 A newspaper distributor hands out a copy of newspaper featuring the sale of U.S. investment bank Bear Stearns to JP Morgan Chase as commuters ascend from Bank underground station in the City of London, Monday, March 17, 2008. 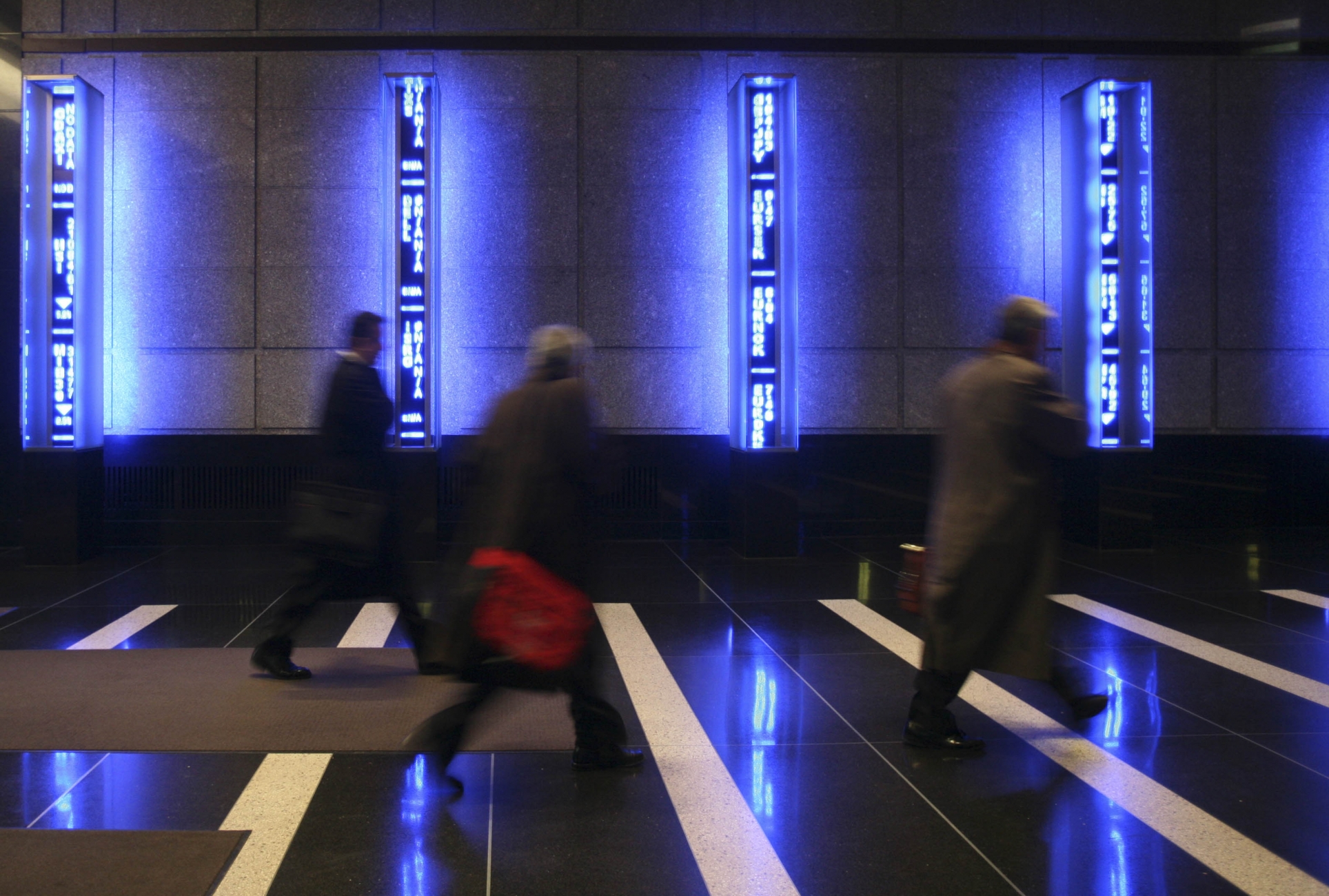 Employees cross the lobby at Bear Stearns on Monday, March 17, 2008 in New York. JP Morgan Chase said Sunday it will acquire rival Bear Stearns for a bargain-basement $236.2 million, a stunning collapse for one of the world's largest investment banks. 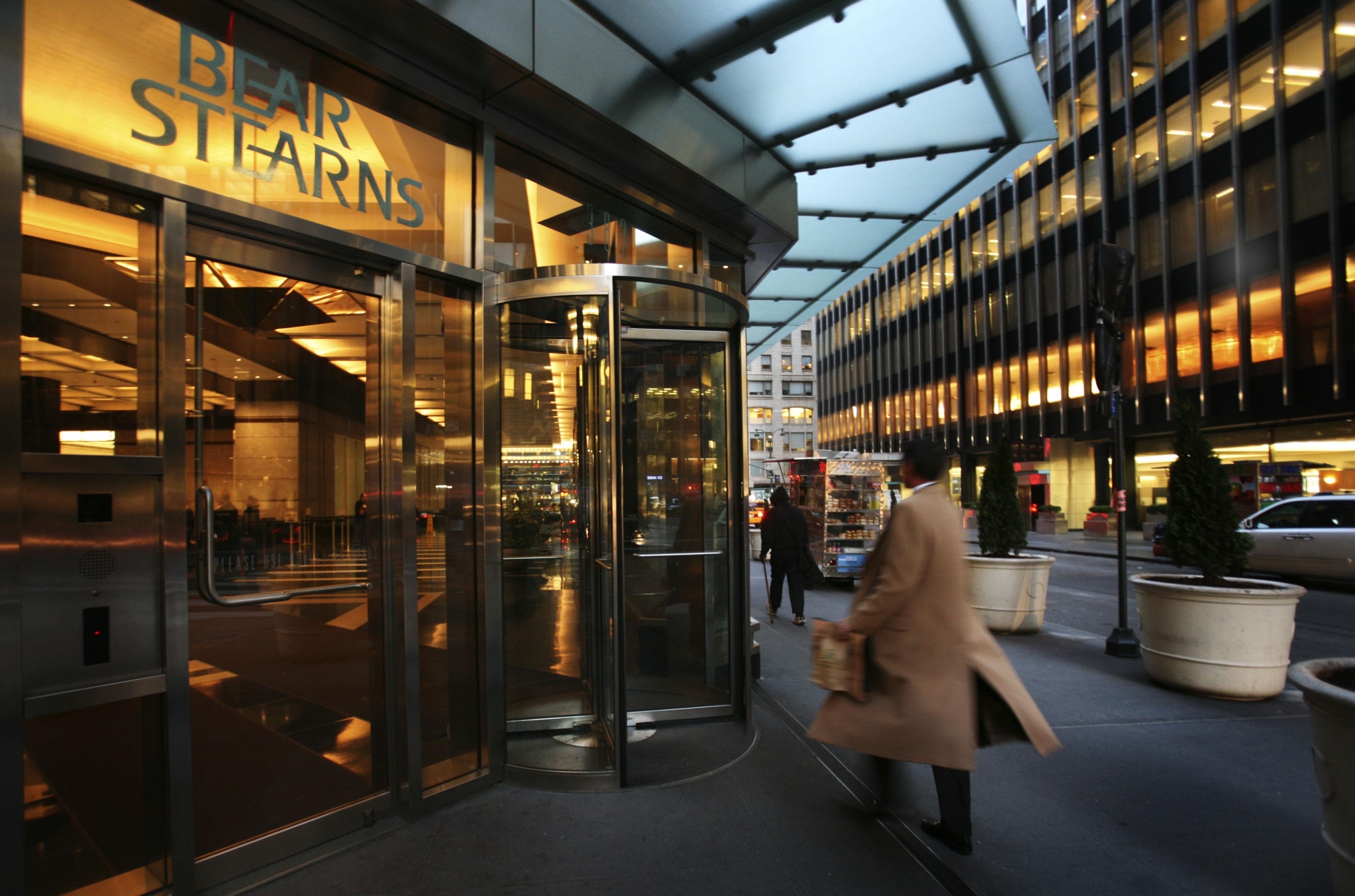 An employee enters Bear Stearns on Monday, March 17, 2008 in New York. JP Morgan Chase said Sunday it will acquire rival Bear Stearns for a bargain-basement $236.2 million, a stunning collapse for one of the world's largest investment banks. 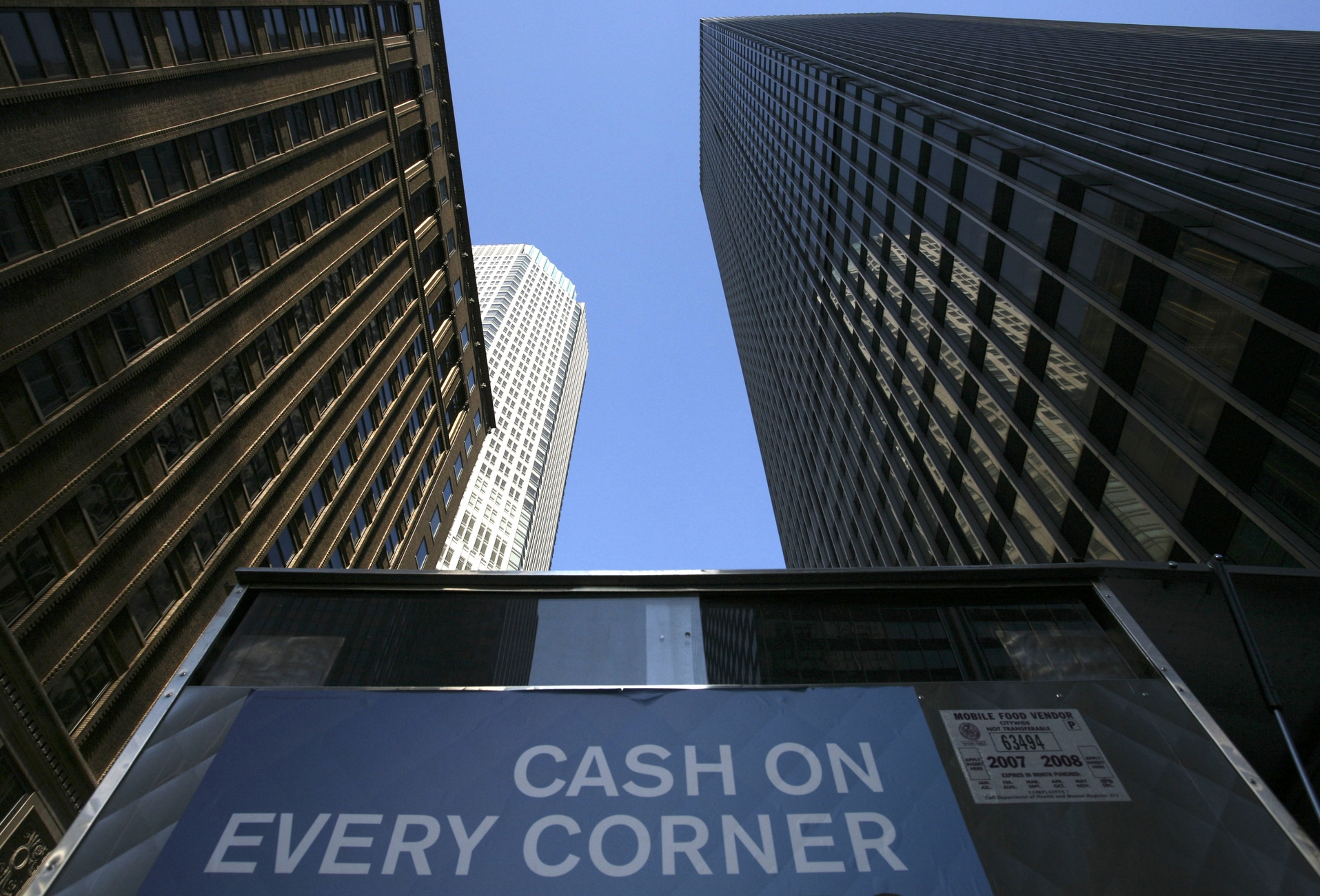 The Bear Stearns headquarters, center, and the JP Morgan headquarters, right, are shown on Monday, March 24, 2008 in New York. JPMorgan Chase & Co. increased it offer Monday for Bear Stears Cos. to $10 per share. 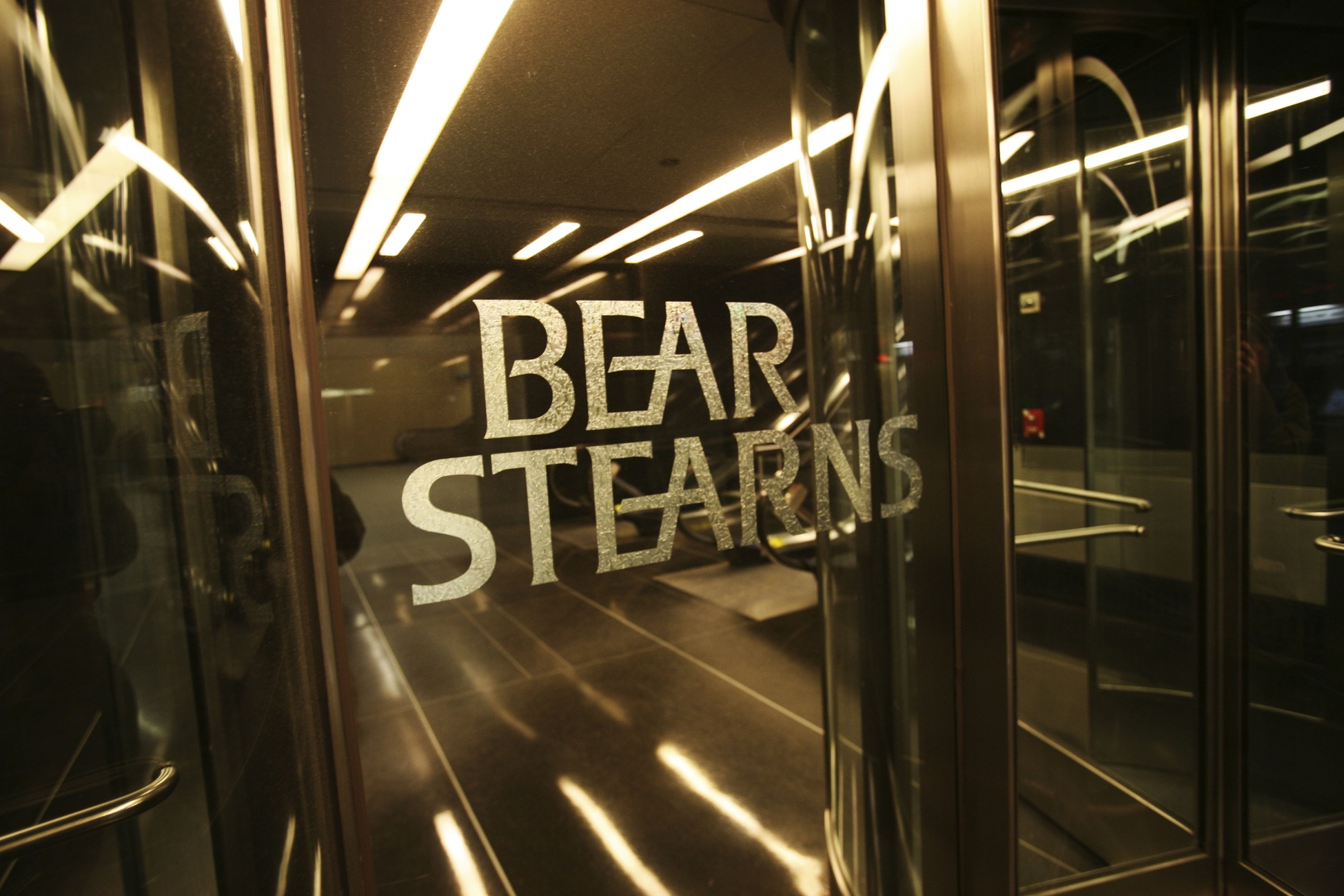 An entrance to Bear Stearns is shown on Monday, March 24, 2008 in New York. JPMorgan Chase & Co. increased it offer Monday for Bear Stears Cos. to $10 per share.

Schoof didn't realize it at the time but at this point in 2008 the U.S. economy had already entered the greatest recession since the Great Depression.

People were nervous, and there was pressure on the government to help.

That confluence of events created an opening, and suddenly, Thompson's plan for a high-speed train was given new life.

A Teamster With A Soft Spot For Trains

It caught Schoof's attention when Bears Stearns went under, but it was mostly business as usual for state government.

Nobody was talking much about a high-speed rail link between Wisconsin's largest cities because they had no reason to. When it came to transportation, state government had always been more focused on highways, bridges and overpasses.

The person in charge of all of that in 2008 was Wisconsin Secretary of Transportation Frank Busalacchi, who started his career driving a garbage truck.

Busalacchi made a name for himself in state politics by rising through the ranks of the powerful Teamsters union.

So, when I walked in the door of a politician or I went to Madison or whatever there was like an alert," Busalacchi said. "'The Teamsters are here, what do they want?'" 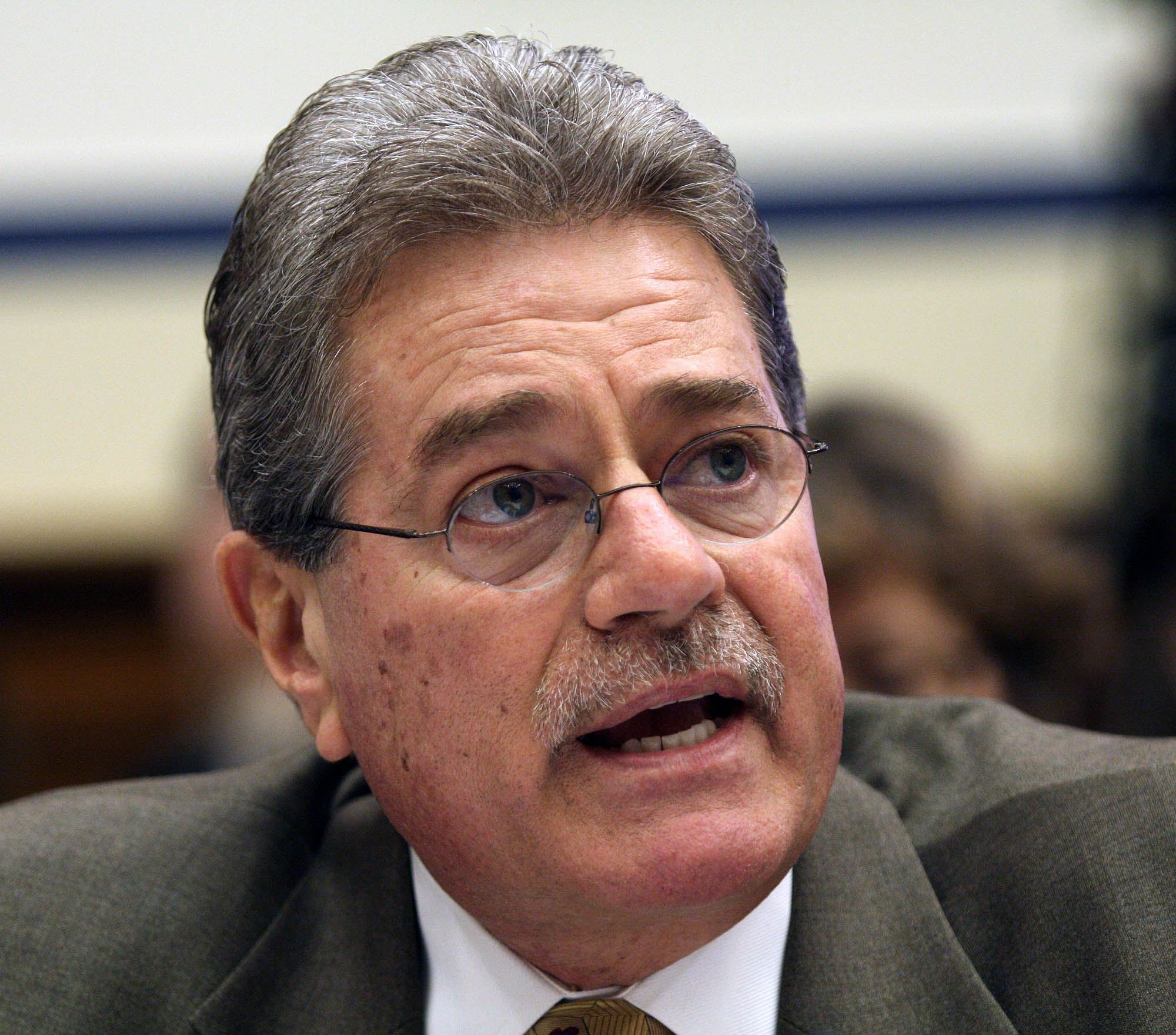 Once he was named to Doyle's cabinet, Busalacchi was essentially the state's chief road builder, like every transportation secretary before him. But Busalacchi had his sights set on something different.

Busalacchi said his love for trains began as a kid in Milwaukee.

"I grew up in the Third Ward, the big train depot was down there, it was a magnificent building," Busalacchi said. "And then of course as kids we always rode the streetcar."

Trains were a passion project for him. Busalacchi had been pushing them at the national level for a few years when then-Illinois Sen. Barack Obama named then-Delaware Sen. Joe Biden as his running mate in August of 2008.

Busalacchi wanted to talk to Biden, and he saw an opening when the senator visited a firehouse in Cudahy, Wisconsin in September 2008.

Busalacchi remembers meeting with Biden in a little office in the firehouse.

"I says, 'I know you're a train guy. I know you, you get it. You know what's going on,'" Busalacchi recalled. He made his pitch for the Midwest Rail Initiative, telling the future vice president that states needed passenger rail funding.

After the meeting, both men headed to a room full of firefighters where Biden was set to give a stump speech in front of a parked fire truck. 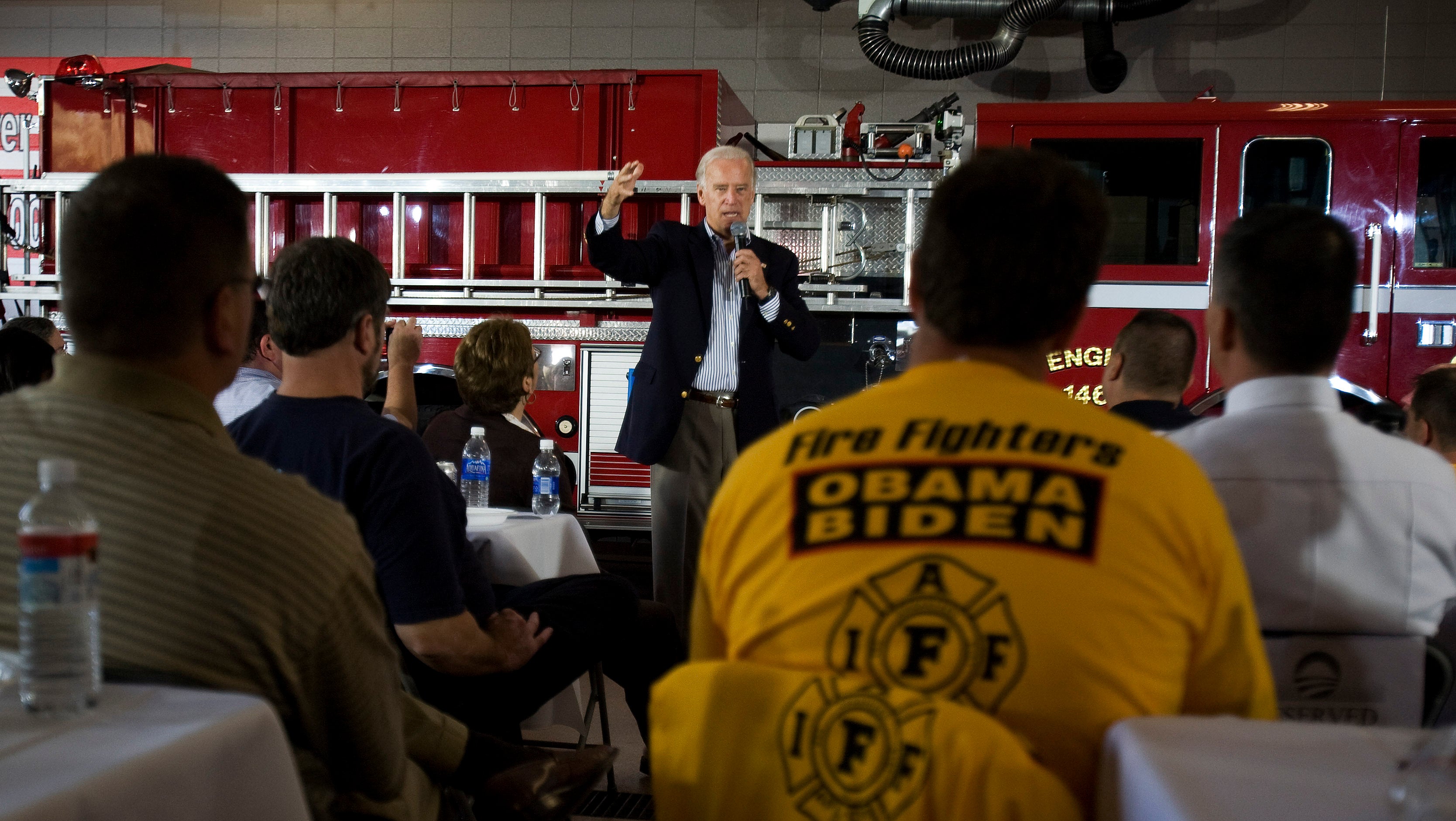 During the speech, Biden went off script.

"Frank I promise you," Biden said. "When we get elected, you're going to have passenger rail coming through the Midwest like it never came before. I'm serious. It's coming.”

A Sketch For A Stimulus

But around the country that summer, one cataclysmic event after another shook peoples' confidence.

It was around that time that General Motors Company announced it was closing its assembly plant in Janesville, where GM had been a staple of the local economy for nearly 80 years.

That summer, financial giant Lehman Brothers collapsed, and days later, the bottom fell out of the stock market.

As the economy plummeted, Wisconsin's state budget deficit grew by billions of dollars, leaving Doyle with the difficult choice of either cutting state spending or raising taxes.

Governors around the country were facing these choices, but Doyle had something they didn’t. One of the most powerful people in the country at the time happened to be from Wisconsin: Democratic U.S. Rep. Dave Obey. 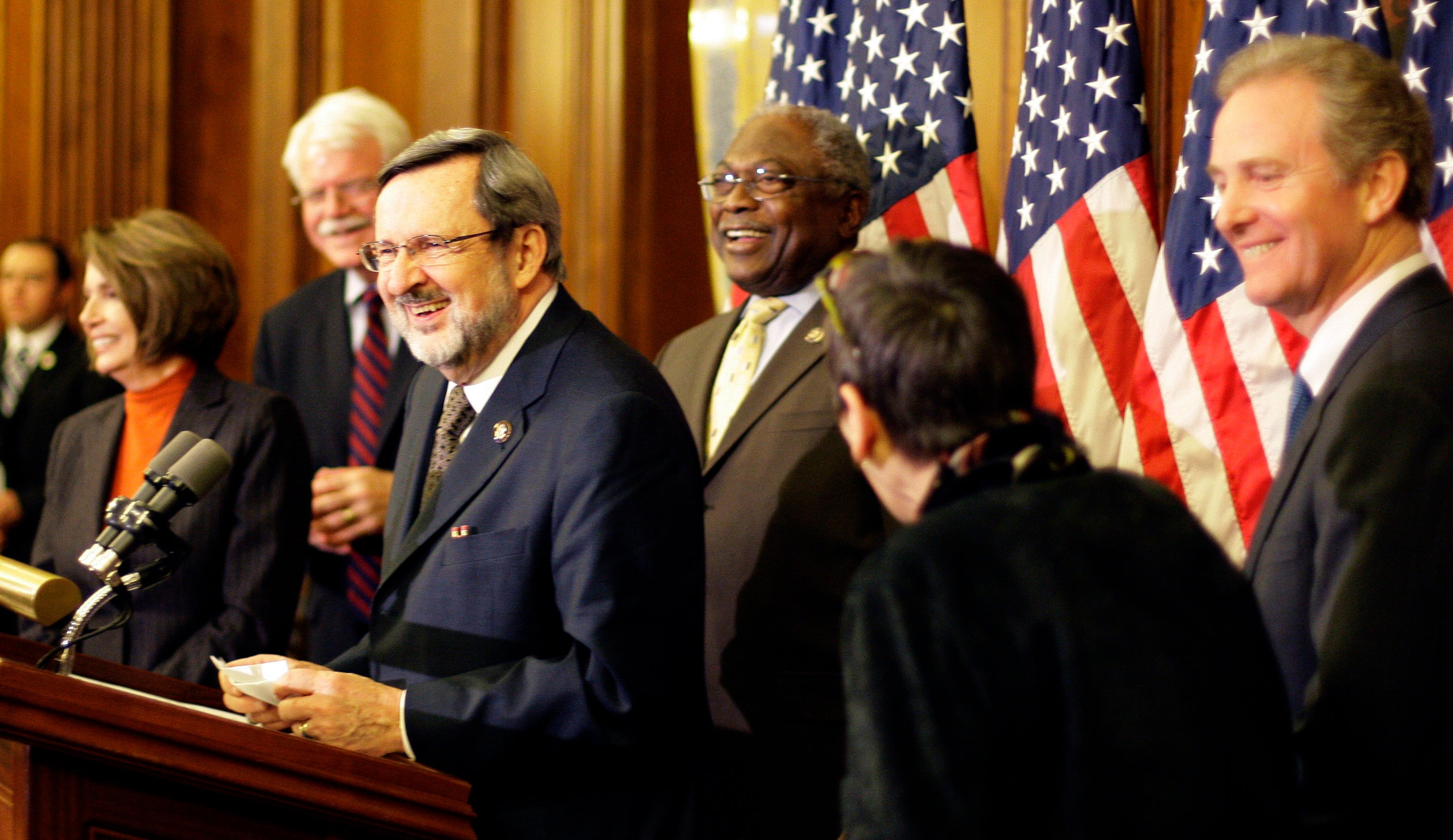 Obey, who is from Wausau, had been in office since 1969. In 2008, he chaired the powerful House Appropriations Committee, which is a huge deal in Washington.

That was especially true in this moment because after the 2008 election, Democrats controlled everything. That gave Obey tremendous influence over how the federal government spent its money.

Obey and Doyle met in Wausau and decided the federal government should do something to help states like Wisconsin.

"I mean it wasn't on the back of a napkin, but they essentially sketched out the stimulus," Schoof said of Obey and Doyle's meeting.

When Doyle and Obey met to talk about the stimulus, they had a couple of goals in mind.

First, they wanted to rescue public schools and government health care programs like Medicaid, which are huge expenses for states.

Second, they wanted to infuse money in new infrastructure projects, creating jobs in the process. The thinking was that the economy wasn't going to fix itself, so the government had to step in and give it a jolt.

There was a frantic push by state governments to come up with "shovel ready" projects that were ready to go immediately.

In 2009, Jim Doyle had one of those: The passenger rail line proposed by Thompson.

But just because the high-speed rail project was shovel ready, didn't mean it was going to get funded. At this point in 2009, Congress wasn’t sure what the stimulus needed to be. 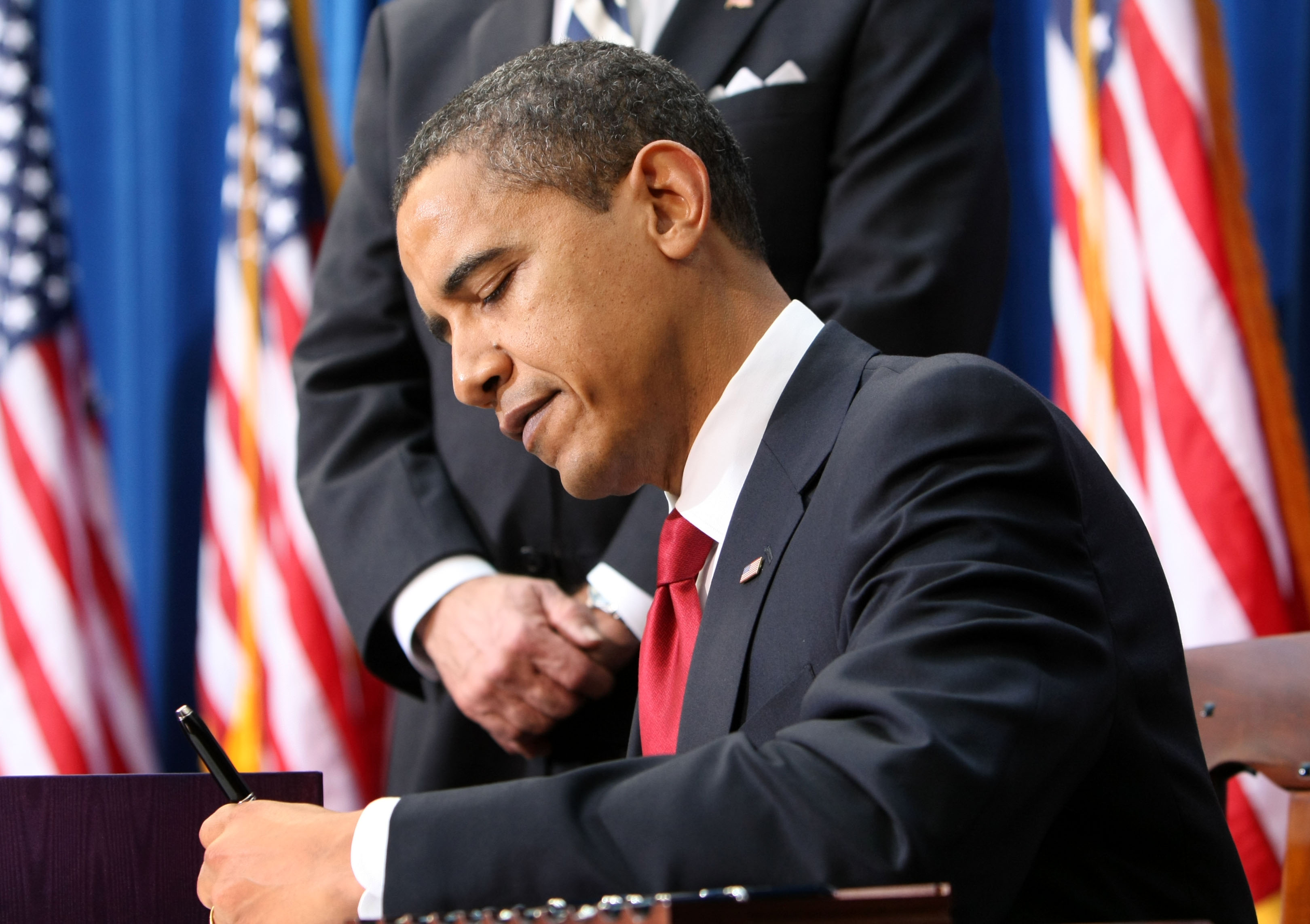 There's no official record of why rail funding grew by so much, so fast. It happened during the conference committee on the stimulus bill, when the leaders of the House, Senate and White House met to hash out their differences.

By most accounts, it was just a few people who made the call to boost rail funding.

"That's eight billion times more than had ever been spent on high-speed rail in America," said President Barack Obama's Secretary of Transportation, Ray LaHood. "And that's thanks to the vision of President Obama.

"I think Rahm Emanuel, the chief of staff at the time to President Obama, and Vice President Biden decided on that number at the last minute," said Ray LaHood, Obama’s Secretary of Transportation.

The final deal got the president's approval on Feb.17, 2009. When it passed, the overall stimulus was nearly $800 billion, with $8 billion set aside for high-speed rail.

"That's eight billion times more than had ever been spent on high-speed rail in America," LaHood said. "And that's thanks to the vision of President Obama."

Now the race was on for states to compete for the funding, and Doyle started immediately. One week after the stimulus was signed into law, Doyle went on a trade mission to Spain to see their high-speed rail network for himself — and ride some of the trains.

At this point the state was asking for enough money to upgrade the Milwaukee to Chicago rail line, and start building out toward Madison.

But over the next several months the state's request grew from around $100 million to more than $800 million. And in January of 2010, Doyle held a press conference to announce that Wisconsin was getting all of it.

"This is a 100 percent funded project," Doyle said. "It is just a phenomenal moment. I mean every single dime that we asked for, we have been granted."

Standing next to Doyle that day was Busalacchi, who remembers being proud.

Other states got some of what they wanted. Wisconsin got all of it.

"It said that the state of Wisconsin has arrived," he said.

Coming next Wednesday on "Derailed:" The conservative backlash against the train. "Derailed," a limited-run podcast about Wisconsin’s high-speed rail line that never was. It’s a look at how the project came together, how it fell apart, and what it says about how Wisconsin has changed. Never miss an episode by subscribing now on your favorite podcast app or at wpr.org/derailed.