In 2010, a high-speed rail line between Madison and Milwaukee was on the cusp of happening. Funding was secured. Contracts were signed. Construction was about to begin.

But that train doesn't exist.

The project was cancelled after the 2010 election, after Scott Walker made it a centerpiece of his campaign for governor. 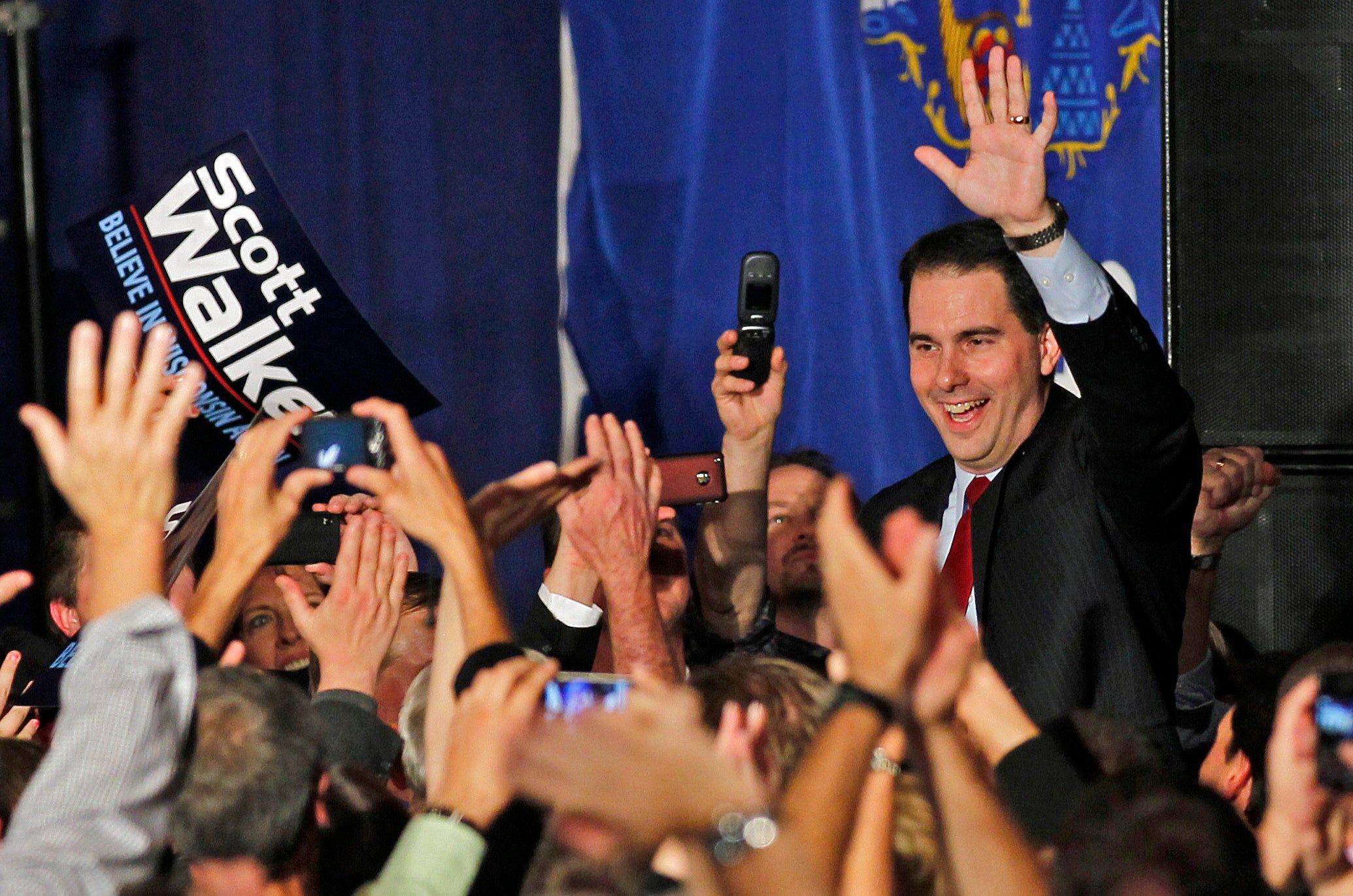 Even if you remember that it was Walker who wanted to kill this train, there's a chance you don't remember who started it.

It wasn't Walker's Democratic opponent in 2010, Milwaukee Mayor Tom Barrett. Barrett supported the project, but this wasn't his train — at least not to start.

Obama picked the Madison to Milwaukee rail line over projects in other states partly because Wisconsin had been getting ready for this moment for years.

And that all started in the 1990s, under another governor: Republican Tommy Thompson. 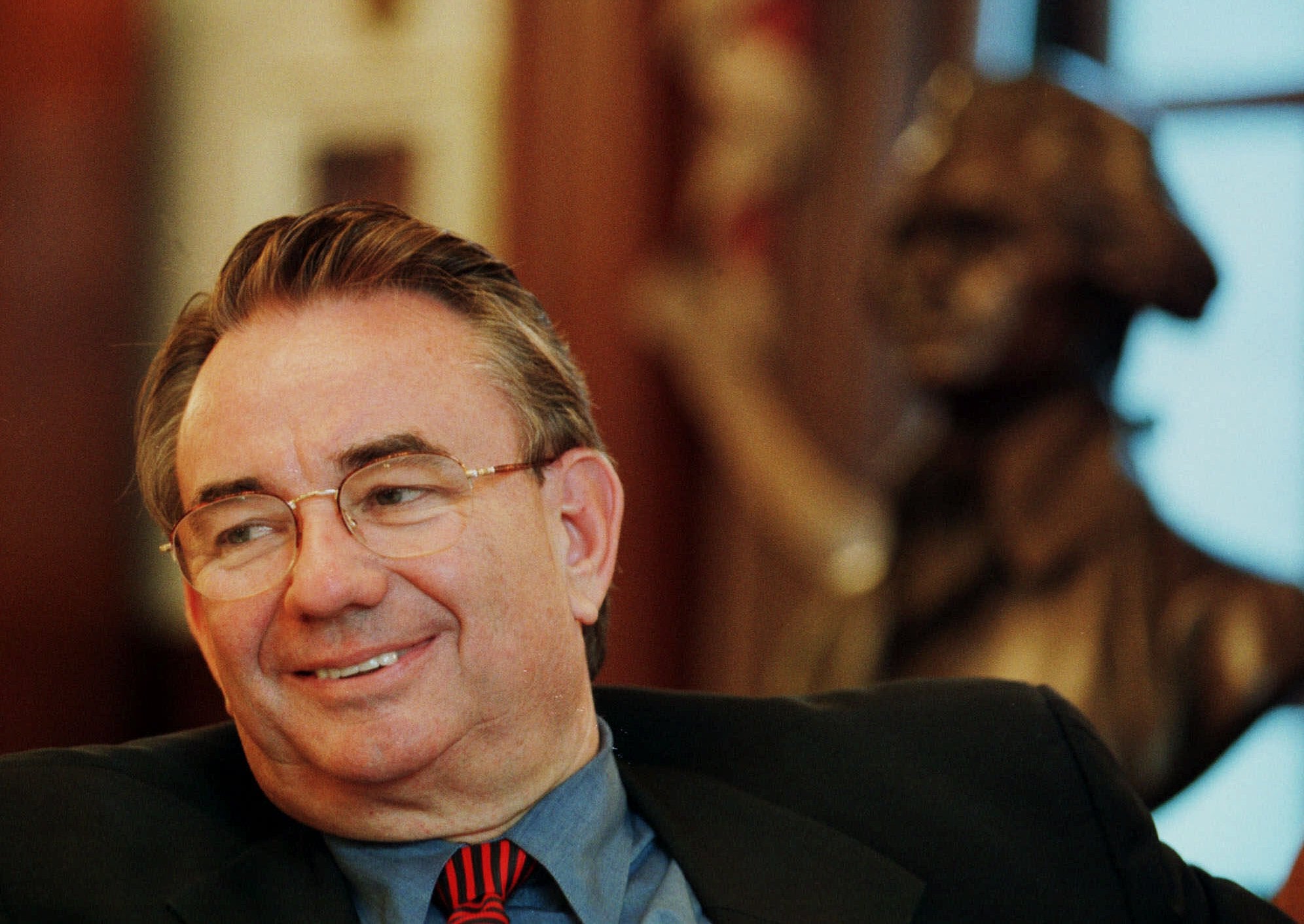 Gov. Tommy Thompson smiles during an interview in his office in the state Capitol on Thursday, Nov. 5, 1998, in Madison. Andy Manis/AP Photo

'Into The Next Century'

Even in the 90s, Thompson was a throwback to a different era. He was first elected to the state Legislature in 1966, when parties weren't so rigid. Republicans and Democrats cut deals with each other, and even socialized.

Thompson had a gregarious, back-slapping style. He belted out speeches in a big, booming voice, like in his 1999 State of the State Address where he proposed high-speed rail.

A typical Thompson speech had a few key elements.

There was Thompson the cheerleader. In 1999, that meant sharing the stage for his speech with Ron Dayne and other members of the Rose Bowl Champion Wisconsin Badgers football team.

There was also Thompson the futurist. That year, he set up televisions on either side of the podium for a video linkup with a distance learning center in the city of Mosinee — population 4,000. In one screen students were studying French, in the other was their teacher, more than 100 miles away.

"This is what the schoolhouse of tomorrow will look like in Wisconsin," Thompson said to lawmakers gathered in the Wisconsin Assembly chamber.

The gesture may seem quaint in the age of smartphones, but in 1999, it was peak internet — cutting edge technology. And Thompson ate it up.

In his speech that night, Thompson told lawmakers he wanted to "charge into the next century." That included a modern transportation system.

And to Thompson, that meant high-speed rail.

Thompson had just been named the chairman of Amtrak, and he was unveiling a new "Midwest Rail Initiative," which he said would carry people between nine states on 3,000 miles of track at more than 110 miles an hour. That network would include a line connecting Milwaukee and Madison to Chicago and Minneapolis.

His speech included some details. Wisconsin would get $2 million from Amtrak to start preliminary engineering. State government would kick in another $1 million.

But mostly, the speech was a sales pitch in classic Thompson style, with some cheerleading — and jokes — thrown in for good measure.

"Imagine the joy in Illinois when they find out that they can escape to Wisconsin at one seventh the speed of sound," Thompson said. "And if we want to travel to Soldier Field to watch the Packers beat up on the hapless Bears, we can do it, and we won't have to pay their tolls."

'It Takes Me Back'

The idea for adding a passenger rail line in Wisconsin didn’t come out of the blue for Thompson. Yes, he was running Amtrak, but there was more to it than that.

In an interview for WPR's "Derailed," Thompson said his love for trains was born when he was a boy growing up in Elroy, a small town about 80 miles northwest of Madison.

Thompson couldn't be prouder of his home town, and he remembers it as a rail hub, where trains from Minneapolis-St. Paul and Chicago would pass through and bring the world to his doorstep.

Thompson remembers sitting on his dad's shoulders when he was six years old to watch President Harry Truman deliver a campaign speech from the back of a train. 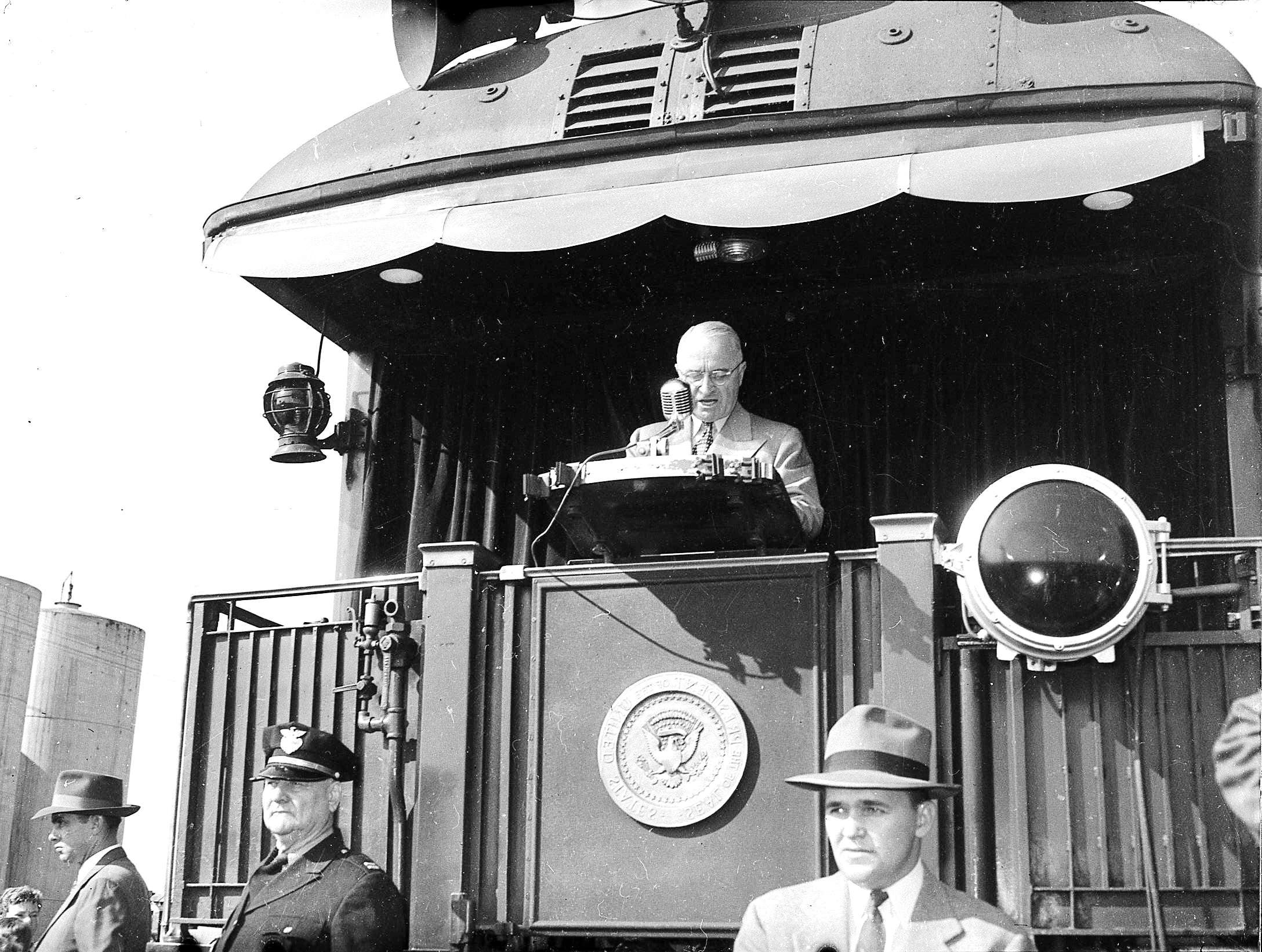 President Harry Truman visits Elroy on Oct. 14, 1948, during his 30,000-mile "whistle-stop" railroad tour of the nation. Photo courtesy of the Wisconsin Department of Natural Resources

But what Thompson remembers most is riding the rails, starting when he was about 10, even when he wasn't supposed to.

"Me and my buddies would hop onto the trains and freight trains and ride them to the edge of town," he said.

This was foundational for Thompson. When he talks about rail or trains or transit, it all started in Elroy.

"It takes me back to my boyhood. My boyhood of hopping freights just like a hobo," he recalled.

Something important to remember is that Thompson is a Republican, and not just any Republican. In 1999, he was prominent nationally. When Thompson developed new policies on issues like private voucher schools and ending welfare, governors in other states would copy him. He was setting the Republican agenda.

Yet in 1999, here was this small-town Republican governor talking about a passenger rail line to connect Wisconsin's two largest cities, Madison and Milwaukee — two cities that typically vote for Democrats.

What's striking 20 years later is that Thompson said his Republian colleagues were basically fine with it.

"I mean, I'm sure if it would have been placed to a vote, there would have been opposition," Thompson said. "But the truth of the matter is that people bought into my vision."

In January of 2000, Thompson was still governor, giving his 14th State of the State Address.

The usual elements of a Thompson speech were there.

The Badgers won the Rose Bowl again, and again, Thompson carved out time in his speech to honor them.

Thompson also had more to say about the future. The big TV screens were back, and this time he used video linkup with a scientist at the University of Wisconsin-Madison who was doing cutting edge DNA research.

And for the second year in a row, Thompson was talking about high-speed rail, using those big TVs to show an artist's rendering of a Madison train station. 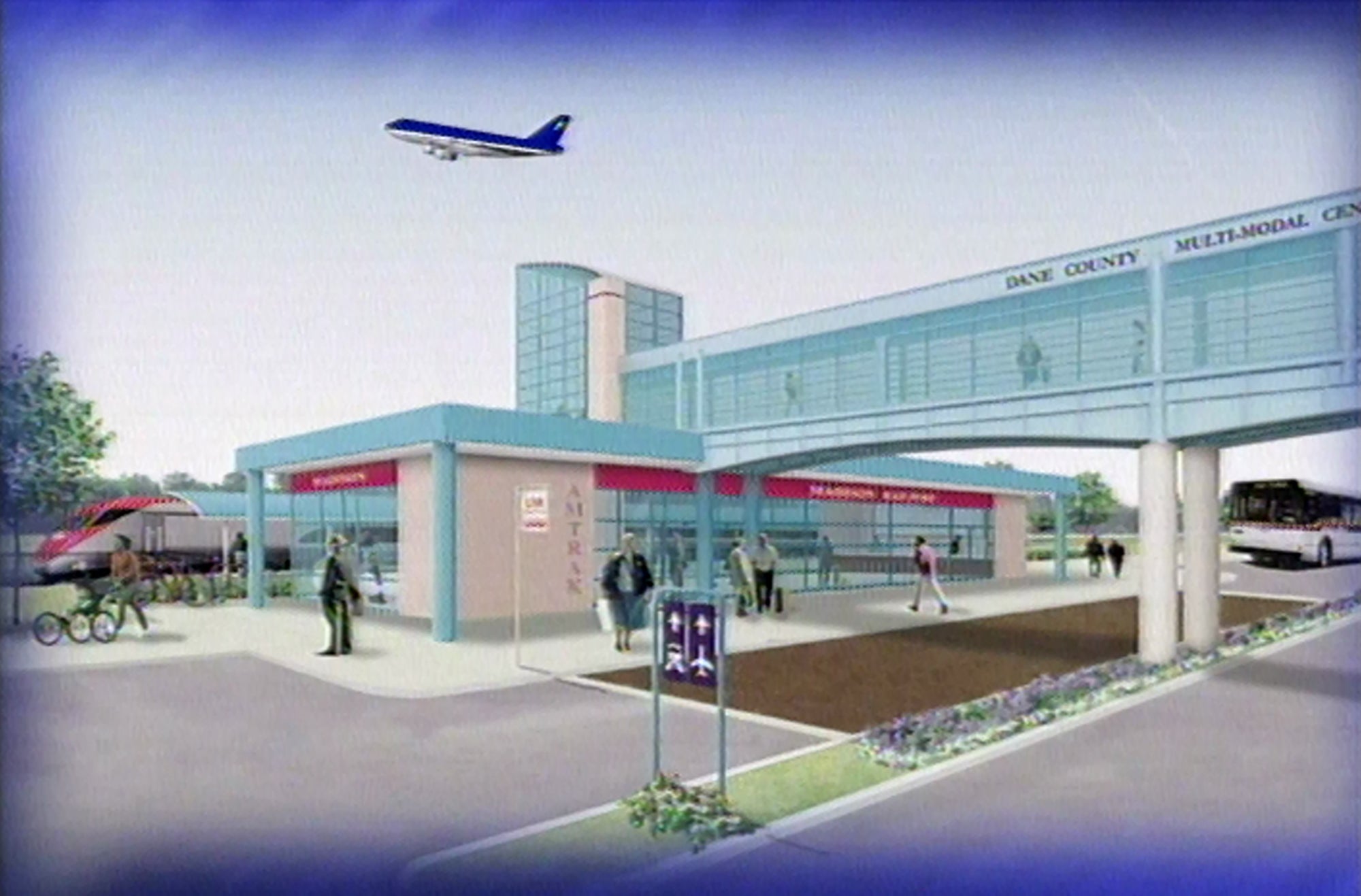 But this time, he offered more specifics. Thompson wanted $50 million from the state for this Madison to Milwaukee passenger rail line, and he wanted $100 million in federal help, too.

He also set a timetable.

"No more lengthy layovers in airports or cars stranded in parking ramps," Thompson said. "Let's get high-speed rail running in Wisconsin by the year 2003."

"The more you told Tommy Thompson ‘No,’ the more likely something was going to happen." Thompson's chief of staff, Bob Wood said. "He was going to put every force of will and effort he could into it and usually came out on the positive end."

It might be hard to imagine now, but in January of 2000, it seemed like this could happen.

"The more you told Tommy Thompson ‘No,’ the more likely something was going to happen." Wood said. "He was going to put every force of will and effort he could into it and usually came out on the positive end."

But all of a sudden, the constant pushing by Thompson stopped.

In December of 2000, President-elect George W. Bush was naming his new cabinet and he picked Thompson to lead the U.S. Department of Health and Human Services.

And just like that, the longest serving governor in Wisconsin history was done. Pretty soon, he resigned the Amtrak chairmanship, too.

Of course, nobody can say what would have happened if Thompson had stayed governor a little longer. Wood thinks there might be a passenger rail line between Madison and Milwaukee right now.

"Once he has something in his sights, he doesn't let up," he said. "There would have been a number of senators who would have gotten tired of seeing him and a lot of doors knocked on or kicked in. So I think if he were still in office we'd probably have a little different outcome."

This story is part of WPR's "Derailed," a limited-run podcast about Wisconsin’s high-speed rail line that never was. It’s a look at how the project came together, how it fell apart, and what it says about how Wisconsin has changed. Never miss an episode by subscribing now on your favorite podcast app or at wpr.org/derailed.