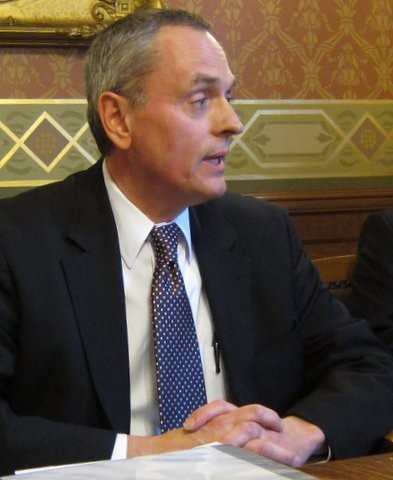 Dems Slow Vote On Bill To Weaken Milwaukee County Board

Democrats have delayed a vote on a bill that would reduce the power of the Milwaukee County Board, but Assembly Republicans remain poised to pass it next month.

The bill being pushed by state Rep. Joe Sanfelippo (R - West Allis) would explicitly grant the Milwaukee County Executive, currently Chris Abele, the power to approve contracts, run departments and manage employees. In doing so, it would cut into the power and the budget of the 18-member county board. Sanfellipo says the board would still have final say over the county budget.

"Any County Executive can only do what the board directs him or her to do, so there's absolutely no concern that we're going to have some rogue, runaway county executive doing things that nobody wants him to do because it's just not going to happen."

If voters pass a referendum, Sanfellipo's bill would also cut county supervisor pay in half.

Democrats, like Rep. Sandy Pasch (D - Milwaukee) attacked the plan Wednesday as an infringement on local control. Pasch says it's not what constituents are expecting from the legislature.

"We are spending today trying to micromanage the county of Milwaukee. I did not hear that when I knocked on doors, and I don't know how many of you did."

Pasch said any reform of county government needed to come from within, between county Executive Abele and county board Chair Marina Dimitrijevic. Democrats blocked a final vote on the plan yesterday, but Republicans in the Assembly will likely pass the bill when they reconvene early next month.